4 tangent lines to parabola with points on circle

Parabola with focus F and circle with center F (the same F) have two points in their intersection. Show that there are points A,B,C and D on the circle such that the lines containing AB, BC, CD and DA are tangent to the parabola. The hint was about choosing point A s.t. the line through AF and the line through the point A that is parallel to the axis of symmetry intersect the circle on symmetric (with respect to the axis of symmetry) points, and the take D and B to be the intersection of the tangents through A (to the parabola) with the circle and show that they are symmetric (again, with respect to the axis of symmetry). I understand why D and B being as described finishes the proof, however, I don't see why is it true. Thanks.

Let's begin with this: 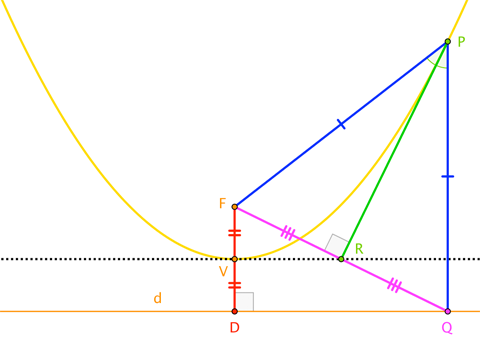 Proof. (Forward) Define $Q$ on the directrix as the foot of the perpendicular from $P$. By the definition of the parabola, $\overline{FP} \cong \overline{PQ}$. By the Reflection Property, the tangent at $P$ is the angle bisector of $\angle FPQ$, and therefore also the perpendicular bisector of $\overline{FQ}$. Since the vertex tangent is equidistant from the focus and directrix, it meets $\overline{FQ}$ at its midpoint. Thus, that midpoint is the intersection of the two tangents ($R$), and the tangent at $P$ meets $\overline{FR}$ at a right angle. (Reverse) Define $Q$ as the reflection of $F$ in $R$, noting that it necessarily lies on the directrix. Then erect a perpendicular to the directrix at $Q$, and define $P$ as its intersection with the parabola. As $\triangle FPQ$ is isosceles, $\overline{RP}$ bisects $\angle FPQ$, so that this line is tangent to the parabola. $\square$ 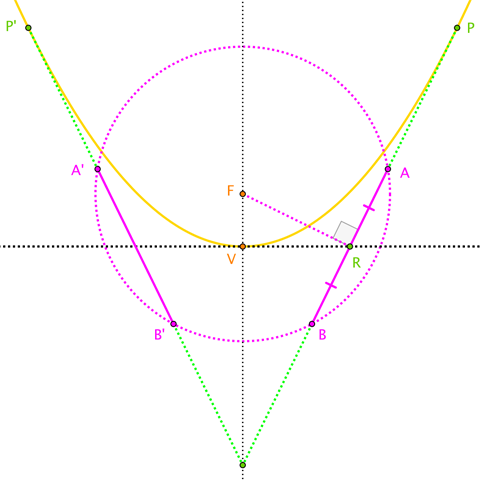 By the perpendicularity property proven above, we see that $\overline{AB}$ is a chord of some circle about $F$. Note that $\overline{A^\prime B^\prime}$, for $A^\prime$ and $B^\prime$ the reflections of $A$ and $B$ in the parabola's axis, is also a chord of that circle.

Joining $A$ to $B^\prime$ gives yet another chord whose midpoint, $S$, must lie on the vertex tangent. Thus, $\overline{FS}\perp \overline{AB}$, and our converse result implies that this chord is also tangent to the parabola. 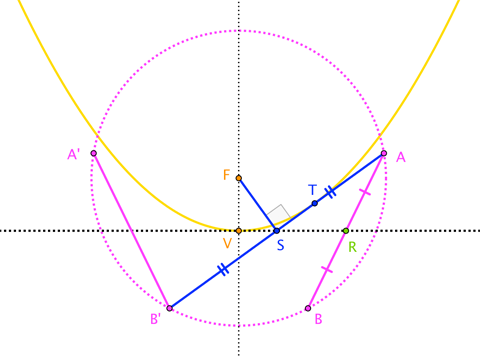 Finally, $\overline{A^\prime B}$ (not shown) is a fourth tangent chord. $\square$

Note: This discussion starts with a tangent and derives a circle (and then more tangents). The reader is invited to adapt the argument to the question that assumes the circle and derives the tangents. Ultimately, the "magic" suggested in my comment to OP may boil-down to the perpendicularity property above.

I agree with the comment by Blue: the property you describe appears to be universal; the choice of $A$ does not matter. 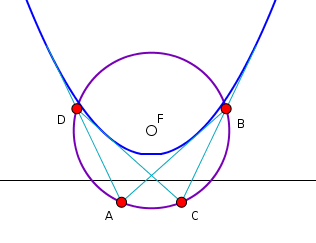 So let's prove this. I like to use coordinates. Without loss of generality choose your coordinate system such that the focus is in the origin, the directrix is $y=-\frac12$ so the equation of the parabola is $y=x^2-\frac14$. The circle has arbitrary radius $r$. Using the tangent half-angle formulas, a point on the circle has coordinates $$\frac{r}{t^2+1}\begin{pmatrix}2t\\t^2-1\end{pmatrix}$$ with the exception of the point (excluding the point $(0,r)$ at the top, which corresponds to the limit $t\to\infty$). So now you start with any point

or in homogeneous coordinates

And likewise for $B,C,D$ using parameters $b,c,d$. The circle and parabola are described by

where a point lies on the respective conic iff multiplying the homogeneous coordinate vector of the point with this matrix from both sides (i.e. as a row vector from the left and a column vector from the right) returns zero.

Now things become technical, so I'd use a computer algebra system. Given homogeneous coordinate vectors for $A$ and $B$, the line joining these is the cross product of the vectors. That line is tangent to $P$ if multiplying the vector of the line with the adjunct of $P$ yields zero. That is the case iff

The first two factors describe degenerate situations, namely $r=0$ or $a=b$. The third factor characterizes the two possible choices of $b$ as

2
Baricenter of $4$ intersection points of parabola with circle lies on axis of parabola
1
pick point on parabola so 2 conditions are true
24
The locus of points from which tangents to a parabola make a constant angle is a hyperbola with the same focus as the parabola
15
Finding tangents to a circle with a straightedge
0
The point of intersection of two perpendicular tangent lines to a parabola
1
Equation of a (rotated) parabola given two points and two tangency conditions at those points
5
Lines tangent to a parabola
0
Show that the normal line of a parabola at point P...
1
A parabola with focus $(3,4)$ touches $y=x$ and $y=0$. Find its directrix, equation of parabola and vertex.