I've looked over the internet, and everyone seems to agree that the $4^\text{th}$ dimension is a chaotic place.(who can blame them? a $2$D being would think the $3$D world may look chaotic) but i wonder: what do $3$D figures look like when they're given this extra degree of freedom? They will seem to rotate oddly, a fact I mentioned in one of my questions, where the hypercube and other polychora rotate with oddness. My question is, what do some well-known objects, like the Klein bottle and torus, look like in $4$D?

I think you might have a better view of $3D$ objects if you lived in a $4D$ world. Think of a $2D$ shape, like a circle: if you were in a $2D$ environment, supposing you are outside the circle, you'd see it similar to a segment in front of you. If you had stereo view, the segment's midpoint would appear closer to you and the extremities farthest. But, since you live in a $3D$ world, you have a much clearer understanding of the overall shape and structure of the circle. I guess something similar would happen if you had a chance to look at, say, a cube or a torus in $4D$. Moreover some shapes that actually cannot exist in $3$ dimensions and can only have projective representation, like the Klein bottle you mention, may be available in $4$. Just as a cube cannot really exist in $2D$, it may only be represented under some perspective.

EDIT: I can better explain why, in a $4D$ world, $3D$ objects could be seen more clearly. The process of viewing, in any number of dimensions, consists in a projection on the hypersurface of a virtual hypersphere centered at the observer's position. You are in fact "losing" one dimension. This is why in our environment, up to $2D$-figures can be seen without the need of overlapping parts of them. Obviously you have to be correctly positioned to see them at best (you can look at a circle with your eyes lying on its same plane, so you wouldn't benefit from the $3^{rd}$ dimension you have). In $4D$ you could make sure to look a up-to-$3D$ object from a perspective that lets you see it entirely, with no parts of it covering other parts, exept for the opposide "faces" of what you are seeing (even in our world you cannot see at the same time both sides of a playing card). You have to make sure that the $3D$ object is perpendicular to the line joining you and it in the $4D$ world. It "lacks" one dimension of the $4$ available, and this dimension has to be aligned with the projection direction, so that the figure essentially lies entirely on the hyperplane it's projected on.

There are multiple ways to come at your question: 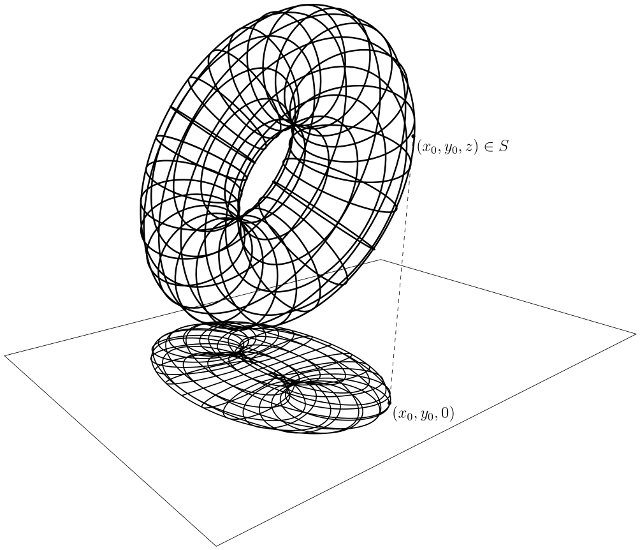 0
rotation of objects in fourth-dimensional space
1
Definition of a shadow in space, and how to derive a shadow for a given shape