I'm having trouble understanding the solution to a coding contest problem.

Suppose a student's attendance is recorded as a string, e.g.

where the letters represent Present, Late, and Absent. A reward is given to the student who satisfies the following criteria,

Given an attendance record of length $n$, then, how many rewardable records exist?

The official solution attempts to build a recurrence relation, starting with this diagram: 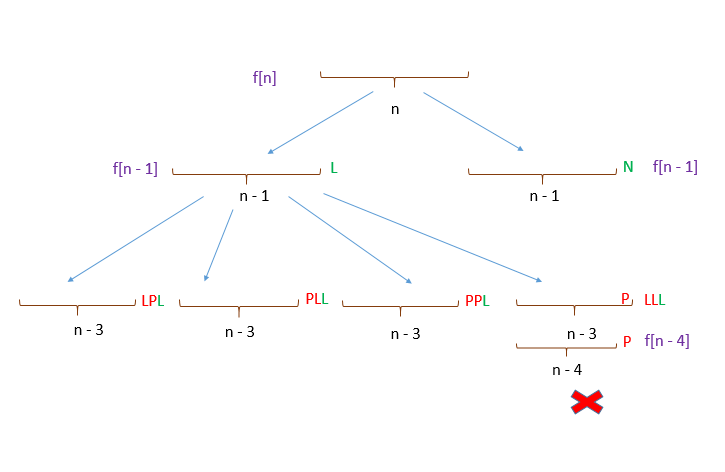 It explains: Let $f[n]$ represent the number of rewardable cases for a string of length $n$. Let's divide into two cases,

It's easy to see that the second case is rewardable as long as the piece preceding the P, $f[n-1]$, is rewardable.

However, the L case must be split into four pieces, as shown. There, the author claims that the only troublesome piece is the last, ending the string in LLL. His exact words are,

Another thing I don't understand is why the first of the four cases isn't also problematic, since if the $n-5$th and $n-4$th characters were L, then we'd also have an unrewardable string.

Any hints as to untangling the author's explanation would be appreciated. Thank you.

P.S. The author is intentionally ignoring A at this stage, to be considered separately.

It really is a lot easier than the author makes out.

or, in other words

The overall answer (including the possibility of an absence) will be

Not the answer you're looking for? Browse other questions tagged combinatorics recurrence-relations or ask your own question.

4
What is the probability of three consecutive results X and two results Y in an event?