I have 5 points which I would like to fit onto a curve. Mostly this is just for fun, but trying to do it is hopefully teaching me and my daughter some mathematics. We're using shape-building to learn about the properties of equations.

We tried a linear regression of a quadratic function and the software did not hit all points. Is that a limitation of the software or are we simply trying to do something that a parabola cannot do?

I tried higher order functions but as you might expect, the shape that the software produced was not concave to the left.

In general I'd like to understand whether every concave curve can be described as a single equation and if so, how.

as shown in the diagram below. 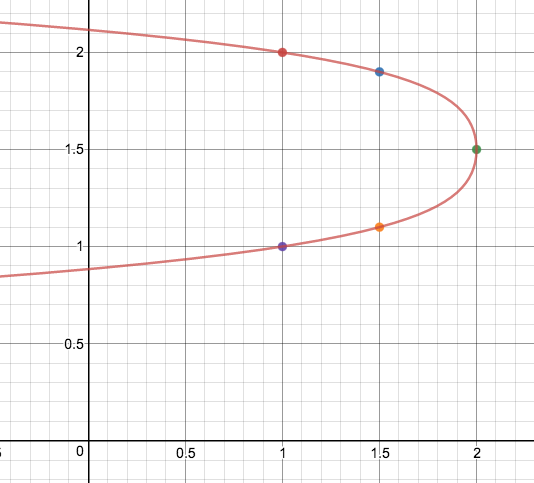 This gives you 3 parameters from which to try to vary the curve, but you would like to pass through 5 points. You can either

Four points determine a parabola, its equation has 4 constants:

By Cramer's rule (arranged in a matrix) we can find the parabola passing through four given points ( as also the conics through 5 points).

A fifth variable point placed on a slider (p1,p2,P,p3,p4) forms ellipses when placed outside parabola and when placed inside it, form a hyperbolas.

The locus of a fifth point to remain on a parabola set up through 4 prescribed points is the same parabola.

So from the data you gave there are 5 such combinations/cases. In each case place the fifth point on a slider (with a reasonable slider domain) and see all possibilities as above.

I believe all possible convex/concave shapes can be obtained this way.

Next, I took the 5 points you gave and it is seen to makes a narrow ellipse, but not narrow enough to make a parabola with arms going to $ \infty $ to the left. So I perturbed the second point on a circle with first point as center. When the second point is placed a bit below the location you have given, (all the other four points being fixed ) a parabola can be captured. Exact value for symmetric case is given below.

3
Non-symmetrical parabola
3
Does the symmetry of a parabola in finding the maximum area of a rectangle under said parabola matter?
0
Parametric Equation of a Parabola give 3 points
4
Deriving formula for curve given a set of points
0
parabola equation from two points and vertex
0
Drawing bezier curve from a parabola
2
Project parabola onto another plane (edited)