$x^2+y^2+z^2$ only depends on the squared distance of $(x,y,z)$ from the origin and the constraint $x+y+z=1$ tells us that $(x,y,z)$ lies in a affine plane. The problem is solved by finding the distance between such plane and the origin: since the plane is orthogonal to the line $x=y=z$,

This is not a proof in itself, but if you've studied statistics, then you've seen a proof that

If we now consider a random variable $X$ with three equally likely values, $X=x,y$, and $z$, then we have

Excellent algebraic have been given (I voted for them). Intuition can here be obtained through visual proofs. 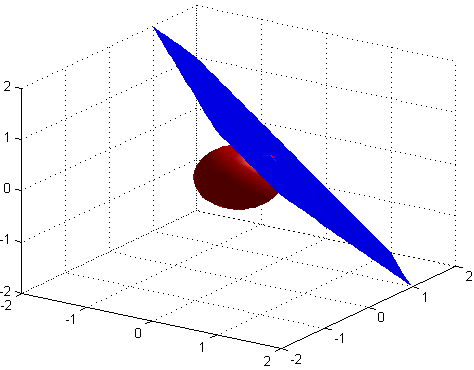 Would the sphere be bigger (a radius higher than $1/\sqrt{3}$), it would intersect the plane in more than a single tangency point.

If you rewrite your proof as:

You would find that it is not so unintuitive after all.

In general, a technique that works for many cyclic polynomial inequalities is to try to 'smooth' the terms out. Terms that are just a power of one variable are the 'biggest', and using inequalities like "$x^2+y^2 \ge 2xy$" will 'mix' powers and thereby 'reduce' them.

One more way to prove it is by substituting out for $z$:

Ok, you want an intuitive proof, not a better proof. That's fine.

I did not say that this would be pretty, but it is pretty intuitive to me :)

Here's another way to approach this. It's easy to see that the value of $\frac13$ is obtained when each of $x, y, z$ is $\frac13$. We want to show that as the variables deviate from this point (with their sum still being 1) the value cannot decrease.

We have an instance of the least-norm problem

Not the answer you're looking for? Browse other questions tagged algebra-precalculus inequality proof-writing contest-math cauchy-schwarz-inequality or ask your own question.