Answering questions from a Character Table

I have been studying a course on Representation Theory, specifically Character Tables. I am able to construct a character table, but I cannot seem to understand working backwards with receiving the table. The question on a past paper exam is:

Consider the character table below of the finite group $G$. 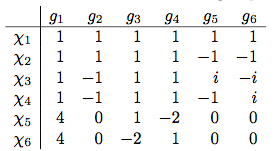 Any help is much appreciated!

I'll post a more-or-less complete answer instead of giving hints because I think there are some mistakes in the question and so only giving hints would probably lead to more confusion.

By the way, I strongly suspect the table is wrong and $\chi_4(g_5)=-i$. Even then the last two columns don't look orthogonal to me.

Added: AlexProvost suggests $C_P(g_5)$ means $C_G(g_5)\cap P$, in which case it's obvious that the intersection of these two groups must be $\{e\}$ since the order of any element in their intersection must be a factor of both $4$ and $9$.