What are all the generalizations needed to pass from finite dimensional linear algebra with matrices to fourier series and pdes?

I've studied Linear Algebra on finite dimensions and now I'm studying fourier series, sturm-liouville problems, pdes etc. However none of our lecturers made any connection between linear algebra an this. I think this is a very big mistake because I see many questions here where everyone just talks about these topics as generalizations of simple linear algebra.

Hence what are the generalizations? For example I think a matrix becomes a function in infinite dimension, but that's about it.

The generalization you're looking for is called functional analysis. Just as you might suspect, vectors turn in to functions, and matrices turn in to linear operators that act on functions. Basis expansions turn in to Fourier-type series. Eigenvalues and eigenvectors generalize to an area called spectral theory. Dot products generalize to inner products...and so on. The best introductory book I know of is "Introductory Functional Analysis" by Kreyszig. It's perfect for someone who has taken linear algebra and perhaps a first course in analysis (at the level of "Baby Rudin").

Here are a few more details:

$$ f(x) \stackrel{X}{=} \sum_{j=1}^\infty\alpha_j e_j(x) $$ Since this is an infinite sum, you have to be much more careful about what you mean by $=$, hence putting an $X$ on top to indicate that this is `equality in the sense of the vector space $X$'. This becomes more precise when you talk about norms, inner products, and metrics. An example would be the so-called Hilbert space $L^2([0,1])$, where equality means

$$ x = \sum_{j=1}^n (x\cdot e_j) e_j $$ In some function spaces, you have a generalization of the dot product called an inner product, written usually as $\langle f,g\rangle$. While there are many inner products, the most popular ones tend to be the $L^2$ inner products:

$$ f(x) \stackrel{L^2}{=} \sum_{j=1}^\infty \langle f,e_j\rangle e_j(x) $$ Some times you don't have an inner product, so "orthonormal basis" does make sense (I have no way to measure angles). But, you can still do basis expansions, it just might be harder to compute the expansion coefficients. There's whole books on this subject - see e.g. A Primer on Basis Theory by Heil or Frames and Bases by Christensen.

Another perspective on linear operators comes from thinking about generalizing matrix-vector products from sums to integrals. Loosely speaking, you can imagine that as $n\rightarrow \infty$, you might have

$$ \sum_{j=1}^n A_{ij}\alpha_j \longrightarrow \int_{0}^1 A(x,y) f(y) dy $$ in the appropriate sense. Here $A(x,y)$ is now a function, so like you suspect, matrices turn in to functions. This perspective is extremely useful, as it comes up in the theory of Green's functions, finite elements, and integral equations.

One thing I will mention is that issues of domain and range become much more subtle. Whereas in finite dimensions it is fairly simple to talk about the domain and range of a linear operator, you can have issues with infinite dimensional operators having to do with boudnedness. For example, the derivative operator $L = \frac{d}{dx}$ is a very important linear operator to study. However it is "unbounded" on most "standard" spaces of functions. This is essentially because we can have "small" functions that get extremely "big" after differentiation - take $f(x) = \epsilon \sin(x/\epsilon^2)$, where $\epsilon$ is a very small number for instance. $f(x)$ is very "small" because it has a very small amplitude, but $f^\prime(x)=\frac{1}{\epsilon}\cos(x/\epsilon^2)$ is very "large".

$$ Lv_j = \lambda_jv_j $$ You can do the same in functional analysis, with a few extra technical details (for instance, instead of finitely many eigenvalues or even countably infinitely many, you can have an entire interval of eigenvalues). Eigenvalues are still called eigenvalues, but eigenvectors are usually called eigenfunctions. A great example is the differentiation operator: if $L = \frac{d}{dx}$, without getting too technical, you can think about any exponential function $v(x) = \exp(\lambda x)$ as being an eigenfunction of $L$ with eigenvector $\lambda$, since

$$ (Lv)(x) = \lambda v(x) $$ Furthermore, the spectral decomposition of a Hermitian matrix (Hermitian means A = A^\dagger), usually written $A = Q\Lambda Q^\dagger$, where $\Lambda$ is a diagonal matrix and $Q$ is a unitary matrix, turns into something called the spectral theorem of self-adjoint operators, which states that any bounded "self-adjoint" (also a symmetry condition) operator $L$ will have a decomposition of the form $L = U T_\lambda U^\dagger$ where $U$ is a unitary operator and $T_\lambda$ is a multiplication operator (the generalization of a diagonal matrix). An example of this is the relationship between convolution and the Fourier transform. Say we define a linear operator $L$ as follows:

Other Sturm-Liouville problems exist for $\frac{d^2}{dx^2}$. For example, $$ Lf = -\frac{d^2}{dx^2}f \\ \cos\alpha f(a)+\sin\alpha f'(a) = 0 \\ \cos\beta f(b) + \sin\beta f'(b) = 0 $$ The domain for $L$ here includes the above separated endpoint conditions. Again there is a discrete set of eigenvalues and all of the eigenspaces are one-dimensional. The eigenfunctions corresponding to these eigenvalues are all one-dimensional, and every $f\in L^2[a,b]$ can be expanded in a "Fourier series" of these orthogonal eigenfunctions. $L$ is symmetric again; so the eignevalues are real and the eigenfunctions corresponding to distinct eigenvalues are mutually orthogonal. These expansions include sine expansions, cosine expansions, and a wealth of other trigonometric function expansions where the eigenvalues are not at all evenly spaced. And all of the resulting Fourier expansions converge in $L^2$ to the original function.

I've added a chart of development from Dieudonne's "A History of Functional Analysis" so that you can see how the infinite-dimensional gave rise to the finite-dimensional. This is very upside down, compared to most Math development. The most abstract came first and filtered down for a long before reversing course. 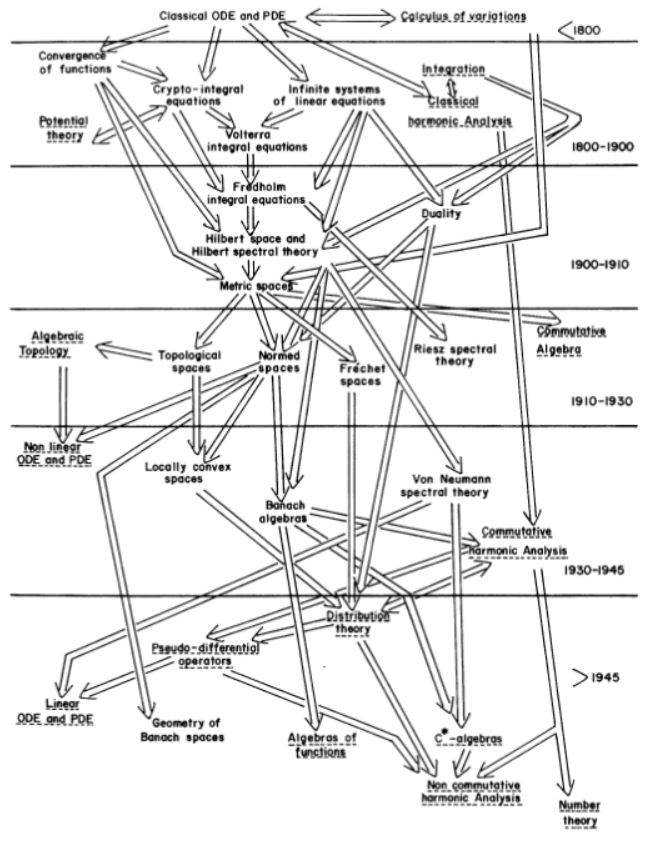 6
Eigenvalues for Sturm Liouville problems and more general ODE/PDE Problems
12
What exactly is antieigenvalue analysis?
3
Good algebra book to cover these topics?
4
Is there such a thing as "total differential equations"?
2
Definition of eigenvalue for Sturm-Liouville problem.
6
Preparation needed for a book like Munkres' "Analysis on Manifolds" or Spivaks' "Calculus on Manifolds"