for every choice of real numbers

The wikipedia page of the rearrangement inequality can be found here.

Here is an interpretation (and proof) of the rearrangement inequality, in pictures that resemble abstract art. 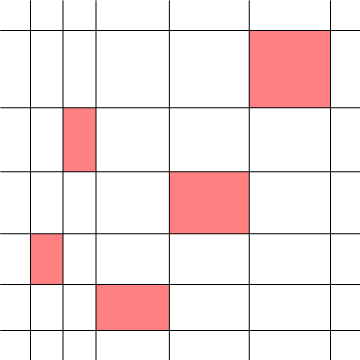 Let's begin by comparing two choices of $\sigma$ that differ only by a single transposition, as shown in the diagram below. (One area is in red, the other in blue, with overlaps in purple.) 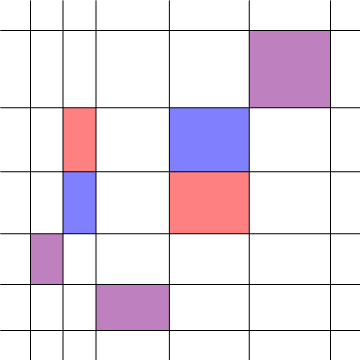 This lets us focus on only a $2 \times 2$ example: the place where the two permutations disagree. We can throw away all the rows and columns where they agree, and zoom in on that: 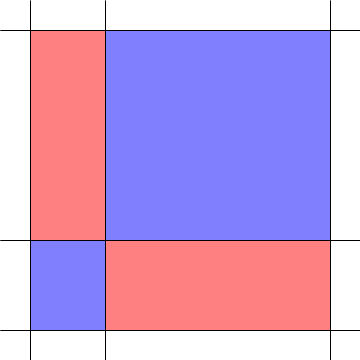 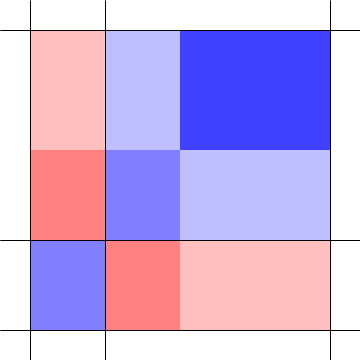 Now the rearrangement inequality follows. We know that if we make local changes (such as from red to blue in the second diagram) that bring the two sequences closer to the same order, we increase the area. From an arbitrary product $x_{\sigma(1)}y_1+ \dots + x_{\sigma(n)}y_n$, if we keep doing such swaps while they're possible, we eventually get to the product $x_1y_1 + \dots + x_ny_n$, so we know this product is the greatest.

Similarly, if we make the opposite local changes, bringing the two sequences closer to opposite orders, we decrease the area. From an arbitrary product $x_{\sigma(1)}y_1+ \dots + x_{\sigma(n)}y_n$, if we keep doing such swaps whil ethey're possible, we eventually get to the product $x_1y_n + \dots + x_ny_1$, so we know this product is the least.

One interpretation is derived from the fact that a rectangle with a given perimeter has the maximum area when the rectangle is square.

Rearranging the sequences of $x_i,y_i$ tends to make the products larger. It's like you have a bunch of widths and lengths and you want to compose rectangles from them, whose sum of areas is maximized. Then making the rectangles as close to squares as possible maximizes the sum of areas.

This isn't a rigorous argument but it could be made rigorous by including the elements of the proof of the inequality in the argument.

Not the answer you're looking for? Browse other questions tagged inequality geometric-interpretation or ask your own question.