How many triangles exist in the diagonals intersections of an heptagon?

In a heptagon (not necessarily regular) with all its diagonals marked, how many triangles exist with two vertex at two diagonals intersections and sharing one vertex with the heptagon?

Assuming that you're fine with triangles whose sides are not, themselves, parts of the diagonals, that will be fine for a heptagon whose vertices are in general convex position: we just need to subtract off triangles with two points on a diagonal. 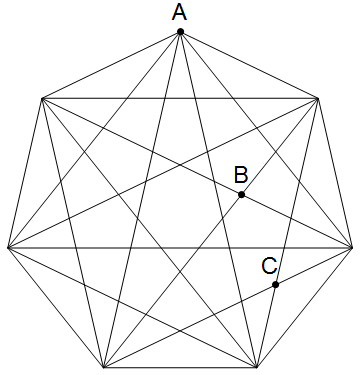 It's not even immediately obvious that $A$, $B$, and $C$ are collinear (they are), let alone how to count all such triples without actually going through the diagram and dealing with every degenerate triangle one at a time.

Not the answer you're looking for? Browse other questions tagged combinatorics geometry or ask your own question.