In calculating the minimum distance (in $\mathbb R ^\mathbb2$) between two disjoint non-convex polygons whose convex hulls cannot be computed without intersecting, I found Toussaint and Bhattacharya's paper for "Computing the Minimum Distance Between Finite Planar Sets".

This works well, but only gives me the minimum point distance; it has no notion of a polygon with a closed ring, which may have a vertex-edge distance which is closer than vertex-vertex.

What I'm wondering is whether the point pair (p1, p2) obtained using the algorithm is always involved in the minimum distance. E.g. either p1 is the vertex and p2 is one of the vertices in the closest edge, or vice versa.

However, I don't know whether this is always the case for disjoint non-convex polygons.

This paper by Nancy Amato is on parallel algorithms, but it cites the sequential algorithms that achieve $O(n \log n)$ time using Voronoi diagrams. 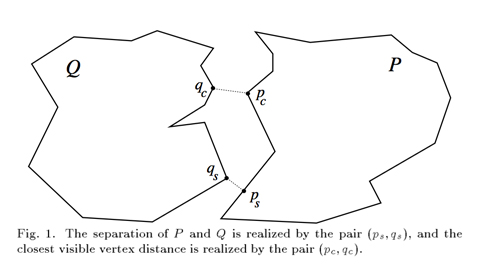 If speed is important to you, and you don't want to go the full Voronoi-route, then you might use an R-tree to reduce the search space for the brute-force quadratic algorithm.

Not the answer you're looking for? Browse other questions tagged geometry computational-geometry polygons or ask your own question.

7
Algorithm to find the point in a convex polygon closest to an external point
0
How to check whether an orthogonal intersection exists between two line segments
6
Shortest distance between two digital blobs
2
How can i find the closest perimeter point from a given point on any edge of a polygon?
2
How many vertices can the intersection of two convex polygons have?