Which number base contains the most Palindromic Numbers?

I made a script that checks numbers through number bases and plots a black pixel if the number is a palindrome in the corresponding base.

If we also connect all the $2$-digit palindromes with straight lines, we get the image on the right. 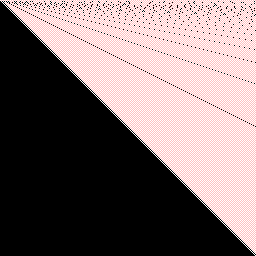 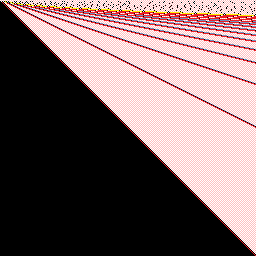 In general, $D$-digit palindromes form a set of polynomials of degrees $D-1$. But it's not clear on which exact points on those curves the palindromes appear, except for the lines.

The thing that I'm interested in, is counting the palindromes outside the black-triangle-region, among $n$ first natural numbers.

If we count the palindromes among first $n$ numbers in all natural bases $b>1$, but ignore the one-digit-palindromes (ones that fill up the black triangle on the picture),

Which base $b$ will contain the most palindromes?

Start counting at $n=1$, then the first palindrome occurs at number $3$ in base $2$.
Base $2$ will hold most palindromes until,

After that, all bases $b\ge5$ seem to follow an equation and overtake the lead when $n$ reaches:

I checked this for bases up to $16$ and confirmed that $n$ follows the equation: (Starting at $b=5$)

With my computations so far, I would conjecture that this equation holds for all $b\ge5$

But this requires a proof.

It would be even better if someone can show how to arrive at this formula without relying on computation.

So far, Mastrem showed why the overtake happens at $b^3 - 2b^2 + 4b - 2$, which makes sense. But it is still not shown that it is the only, and the first, overtake that happens.

Deeper analysis of the plot can be found here.

The thing I'm still trying to prove is that this is the first time $b$ 'takes over'. As soon as I know, I'll edit it in

Not the answer you're looking for? Browse other questions tagged elementary-number-theory recreational-mathematics graphing-functions number-systems palindrome or ask your own question.

29
Structures emerging in a discrete plot of palindromic numbers