Proof that the area under a curve is the definite integral, without the fundamental theorem of calculus

Is there a proof that the area under a curve is equivalent to the definite integral, that doesn't involve the fundamental theorem of calculus. Perhaps a proof that uses Riemann sums.

I feel your question is a little bit reversed in terms of the logical sequence of integration and area. So firstly the question arises about how we calculate the "area" beneath a function, and then people invented integration to do that, and people found that the definition of the "area"/measure is tricky.

Riemann integration tries to give strict definition of how to define the "area" under a function by vertically partition it with small rectangles to approximate the "area" and take the limit of the sum. But it has limitations in dealing with function limits (e.g. Fourier Series of a function) and also some functions do not have Riemann Integration ( e.g. function that is 1 for irrational numbers in $(0,1)$, and 0 otherwise)

In sum, the integration arises when people want to calculate the area under the function, but then people realized the definition of "area"/measure is actually very tricky.

Here is a very quick very informal summary of what calculus is all about (with genuine apologies to historians). I think it may help.

The first is calculating areas. The second is calculating directions along the boundary (slopes). Each of those problems can be solved with a limiting process of some kind.

To find the area under a curve you approximate it by a collection of rectangles and use more and more thinner and thinner rectangles to get better and better approximations. These are the Riemann sums. The essential idea here goes back to Archimedes.

For slopes you approximate the tangent line by a secant line that goes through two close together points, and make the points closer and closer to get a better and better approximation to the slope of the tangent.

In the late 1600's Isaac Newton and Gottfried Leibniz realized (simultaneously and probably independently) that if you could solve one of these problems then you could solve the other. The connection is the fundamental theorem of calculus. It comes in several forms.

Suppose you want to find an area. If you can manage to guess an antiderivative then you can avoid having to go through the tedious calculation of the Riemann sums.

Suppose you want to find an antiderivative. If you can't manage to guess one then you can find one by calculating the area under a curve the hard way (with the Riemann sums).

Now back to your original question:

Is there a proof that the area under a curve is equivalent to the definite integral, that doesn't involve the fundamental theorem of calculus? Perhaps a proof that uses Riemann sums.

No, not really. It's intuitively clear that the area under a curve is what you get from those complicated Riemann sums, so that's how we define the area. Nothing to prove about that. The miracle of the fundamental theorem is that guessing an antiderivative avoids the messy stuff involved in that definition.

The fundamental theorem is what needs to be proved. Newton and Leibniz did, with a level of mathematical rigor appropriate to their time. They weren't very precise about what their "limits" really meant, but they understood quite enough to get the math and physics right. Nowadays we have to be more careful about those limits and approximations. Different calculus courses opt for different levels of rigor.

If we use the definition of integrability given by Darboux,

we understand that the integrale represents the area under the curve.

This is how the Riemann integral is defined by design: 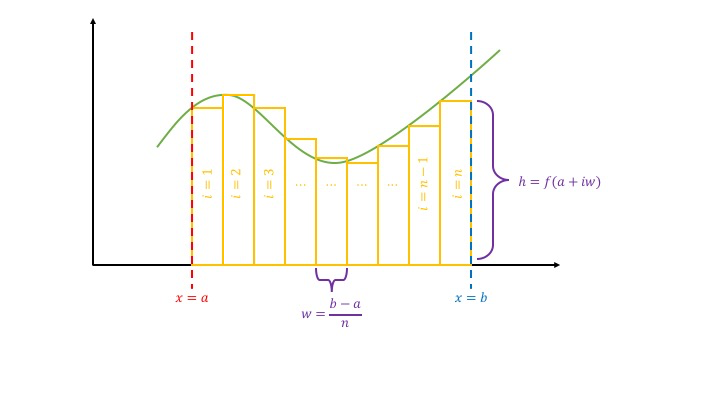 A physics problem would probably be the best to demonstrate that the area under a curve between two points is the same as its antiderivative evaluated between those two points:

Consider the function speed function $v = t^2$ and the definition that speed is the time derivative of position ($v=dx/dt$). If I asked you, “How far does an object traveling at the previously defined speed $v$ travel from $t=1$ to $t=2$,” you might think to yourself,

Well, I know a change in position is a velocity times a change in time, so I am going to use an area approximation under the $v(t)$ graph, where each height is $v$ and each width is $\Delta t$. I’ll get the exact answer by taking a limit. This is the limit defined above.

Alternatively, you might have a stroke of genius (how smart of you!) and realize, Well, velocity is the time derivative of position, and position is the antiderivative of speed (with respect to time); in this case $x=t^3/3+C$. That’s not a definite solution, but if I evaluate $x$ between $t=1$ and $t=2$, that pesky $C$ will disappear and I’ll have my answer!

Both of these methods yield the same answer (so long as the function meets certain criteria)!

Not the answer you're looking for? Browse other questions tagged integration riemann-sum or ask your own question.