What is the standard form of a linear programming (LP) problem?

According to Bertsimas' text, the standard form of a LP problem is: 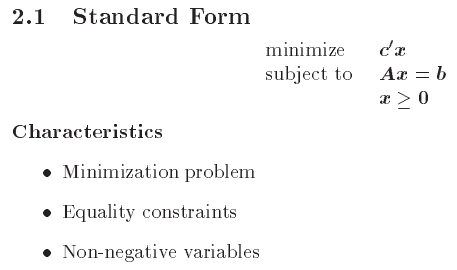 According to Vanderbei's text, the standard form of a LP problem is:

So, what is the standard form of a linear programming (LP) problem? Thanks.

I have seen both the $\min$ and $\max$ forms of an LP frequently, it seems to be an author preference sort of thing. The only difference is a minus sign in the objective ($-c^Tx$ instead of $c^Tx$).

Regarding the constraints, I have more often seen the first form (your Bertsimas reference) referred to as standard or canonical. The two forms are equivalent in some sense.

Since $Ax=b$ can be written as the pair of inequality constraints $Ax \leq b$ and $(-A)x \leq (-b)$, it is clear that the first form can be expressed directly as a problem of the second form.

The problem $\min \{ c^T x | A x \leq b \}$ is sometimes referred to as an inequality form LP. Again, it is equivalent to the other two forms.

Both are standard form. The Objective Function (first line) can be aimed to either minimize OR maximize, the constraints (everything after "subject to") can be many or few, and the constraints can be in any of the following forms: >=, =, or <=

Not the answer you're looking for? Browse other questions tagged linear-programming self-learning or ask your own question.