Geometric notion of addition for the real projective line

Algebraically, we can define the usual extensions of addition, multiplication, negatives and reciprocals from $\mathbb{R}$ to $\mathbb{RP}^1$, with a few cases left undefined. My goal is to find a good geometric interpretation of these operations.

Geometrically, given a line $a \in \mathbb{RP}^1$, the additive inverse $-a$ and reciprocal $\frac{1}{a}$ can be clearly constructed as respective reflections over the lines $0$ and $1$.

On a similar way, multiplication of projectively extended real numbers is just composition of the underlying linear relations, and can be computed geometrically by passing to $\mathbb{R}^3$. To construct $a\cdot b$, one first extends the line $a$ in XY perpendicularly to a plane, then does the same with the line $b$ in YZ, and finally projects the intersection of these two planes onto XZ to find the desired product: 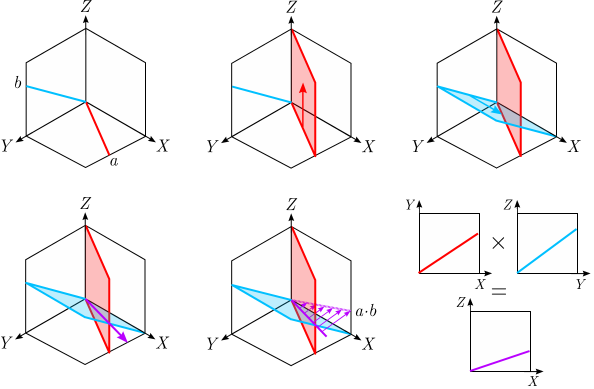 This allows one to find, for example, a consistent meaning to the expression $0 \cdot \infty$ by including the elements of the two trivial Grassmannians $\bot \in \mathrm{Gr}(0, 2)$ and $\top \in \mathrm{Gr}(2, 2)$ among the possible outcomes of multiplication, as is pointed out here. In fact, the composition of any two functions or relations $\mathbb{R} \to \mathbb{R}$ can be performed in this way using their graphs in $\mathbb{R}^2$.

On the other hand, so far I haven't been able to find any geometric interpretation of addition in the projective line. So my question is:

How can we construct the sum of two lines in $\mathbb{RP}^1$ geometrically?

To be more specific, by "geometrically" I mean in the sense of classical compass-and-straightedge constructions and their obvious generalization to higher dimensions (for example, one is allowed to construct a plane passing through three nonaligned points, a sphere given a point and a radius, take intersections, etc.). Alternatively, since the three notions above are still valid if we replace lines with the graphs of arbitrary relations, it could be interesting to look for an answer that is generalizable in this sense (if it exists). In any case, an acceptable construction should be able to reproduce the addition of real numbers, and the identities $\infty + a = a + \infty = \infty$ for any $a \neq \infty$.

The first thing that came to my mind is to use an auxiliary vertical line at a nonzero distance from the origin:

Unfortunately this approach breaks down for vertical lines. The definition of addition for linear relations given the link above seems to suggest a three-dimensional construction like in the case of multiplication, but I've failed to find something that works.

I've just found another construction that satisfies the given requirements. I know it comes one year late, but I'm posting it here as a supplementary solution just in case someone finds it interesting. The construction is based on the one for multiplication that I outlined in the question.

We work in $\mathbb{R}^4$, coordinatized by $(x,y,z,t)$. The starting configuration is a line $a$ in the plane XY and a line $b$ in the plane XZ (notice the slight difference with the case of multiplication; the shared axis here is the X axis).

To construct $a+b$, one extends the line $a$ perpendicularly to a hyperplane in $\mathbb{R}^4$, then does the same with the line $b$, then finds the triple intersection between these two hyperplanes and a third hyperplane given by the equation $y+z-t=0$. Finally, one projects this intersection onto the plane XT to find the desired sum.

This construction has the disadvantage that it can't be easily visualized like the others, since it requires four dimensions. However, it has the advantage of not requiring any arbitrary choices, and it still works if one replaces the lines with the graphs of arbitrary functions in $\mathbb{R}^2$. In that sense, it nicely supplements the accepted answer from Rahul.

Not the answer you're looking for? Browse other questions tagged geometry projective-space geometric-construction or ask your own question.