Projecting an angle from one plane to another plane.

To make it simple, consider:

This is how I understand the problem in a Cartesian coordinate system: 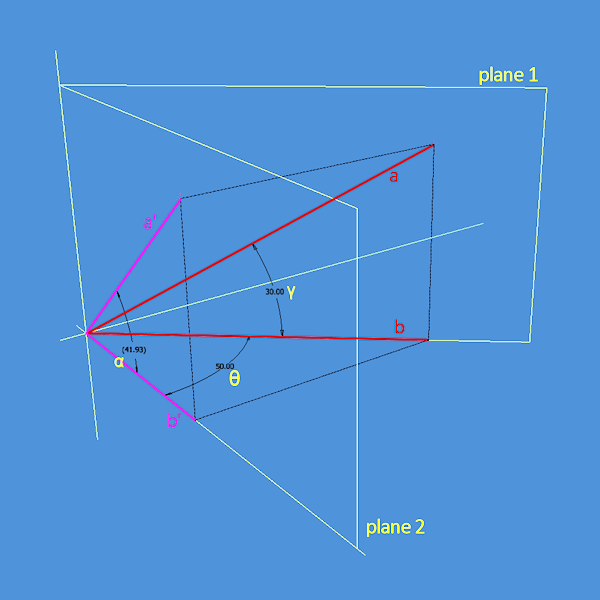 And this is how I solved it (note that two angles are renamed for this via θ → α, α → β: 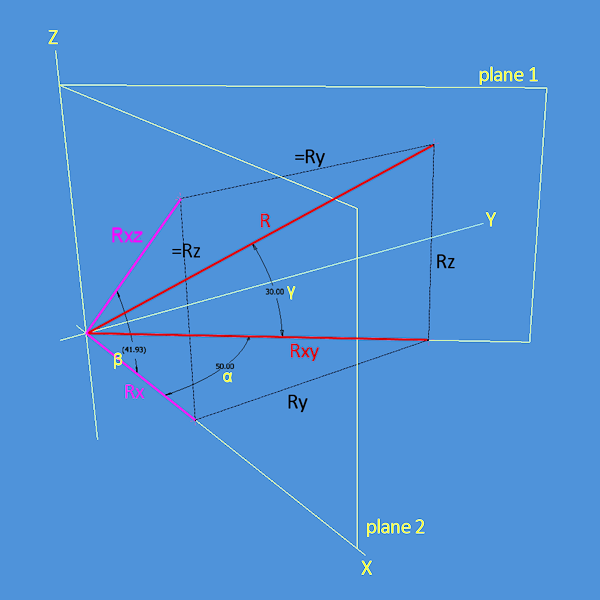 The following equations are valid:

Putting them all together results in: \begin{align} \tan \gamma = \cos \alpha * \tan \beta \end{align}

So in the notation of the original question (with the angles restated as in the OP) the solution is: \begin{align} \tan \gamma = \cos \theta * \tan \alpha \end{align}

I had a similar problem and thought it might be useful for others, as the equation looks way less daunting and is easily solved for any of the 3 angles.

Here I found the answer. I'm not just good in explaining details but to give you a vision of how I solved it, I actually drew two new planes that each of which included one vector from the initial plane and its proper projection from the second plane. These two new planes intersect at the point where all four vectors and the two initial planes intersect. It's easy to notice that the angle between the new planes is equal to $\alpha$ and they both are perpendicular to the second plane. By applying some extra projections and doing some minor calculations, I finally reached to the answer which is shown below;

And for ($\theta \to \pi/2$) $\Rightarrow$ ($\gamma \to 0$), since both vectors $(\vec a$ and $\vec b$) overlap. This result actually stems from an additional assumption that I made, which was I assumed $\alpha$ to remain constant (since in my actual problem it's constant), though without this assumption the final result should be the same. to open a bit this last concept, note that when ($\theta \to \pi/2$) $\Rightarrow$ ($\alpha \to \pi$) which returns the following result;

which comes from the fact that $\gamma$ can possess any value independent of the actual angle between the initial plane and its projected plane ($\theta$).

Not the answer you're looking for? Browse other questions tagged geometry vector-spaces vectors projective-space plane-geometry or ask your own question.

1
angle between steepest gradient of two plane
1
Project point on plane - Unique identfier?
2
Compute angle $\gamma$ between a line and a plane if the line forms angles $\alpha$ and $\beta$ with two perpendicular lines lying in the plane.
1
Angle of Rotation to project a point
1
Calculation of 2 orthogonal planes flush with 2 corresponding vectors
3
Angle of Intersection Between two Planes as Viewed from an Oblique Third Intersecting Plane
0
Given a plane and a line, find the equation of another plane that has an angle 30 of degree to the given plane and contains the given line.
0
Angle between a line on a plane and its projection on to a different plans
5
Find an angle between a triangle and a plane