My son brought this home today from his 3rd-grade class. It is from an official Montgomery County, Maryland mathematics assessment test:

Where has he gone wrong? 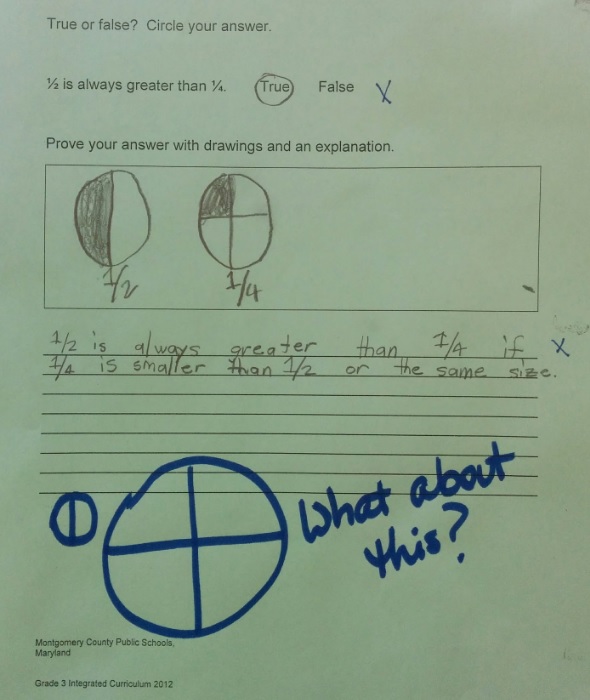 Addendum, at the risk of making the post no longer appropriate for this forum:

Questions about context are fair. This seems to have been a one-page (front and back) assessment. Here is the front, notice the date and title: 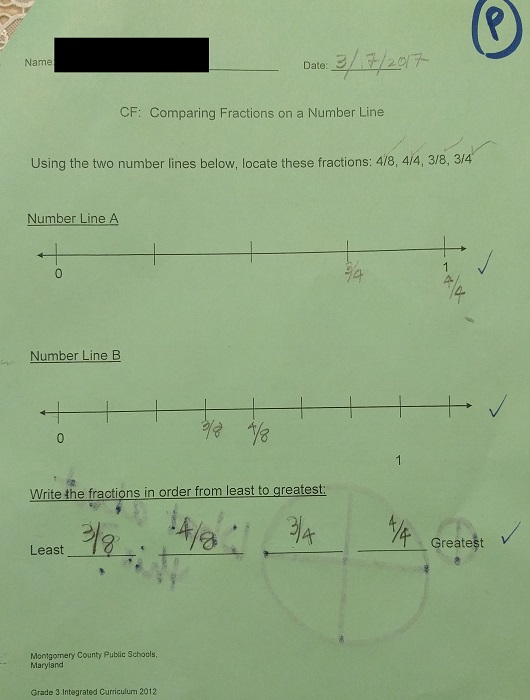 Based on the title, it seems to me that this is an assessment about the number line in which case my son's picture and written proof are inappropriate and better would have been to locate $1/2$ and $1/4$ on the line and state something like "No matter how many times you check, 1/2 is always to the right of 1/4." However, based on the teacher's response it seems the class has entered into a quagmire and is mixing up numbers with portions.

Simply put this is a travesty. The question asks, what appears to be a simple question about two real numbers, $\frac{1}{2},\frac{1}{4} \in \mathbb{R}.$ In particular, it appears to ask if $\frac{1}{2}>\frac{1}{4}.$ The answer to this question is clearly, under normal construction and ordering of the reals, a resounding YES.

Awful, awful, awful question. The intended wording ought to have been along these lines:

Your son reasonably interpreted the question as referring to the ordering of real numbers $1/2$ and $1/4$, as David mentioned.

What to do now? Well, certainly bring it to the educator's attention. They may be unaware of the flaw, or they may have seen it and decided to fudge it (not cool in that case!). But more importantly, there is a lesson to salvage from the wreckage. This a learning moment. There was a major failure in the question. Ask your son why he thinks he is correct, if he sees the intended purpose, how would he would correct the wording, how he thinks the mistake could have been avoided, and what he feels about the whole debacle as it stands.

It's a good point to recognize that mathematics is not only a toolkit to handle computation and understand nature, but a form of communication. Language is essential.

What is missing in the question is the notion of units, or dimensions: greater in what? An inequality like $\frac{1}{4}<\frac{1}{2}$ should assume an equivalent unit on both sides. Speaking of the volume of a liquid, one "could" say:

because one liter is one cubic decimeter. But saying

when the LHS is in kilometers and the RHS in micrometers, without mentioning it, is a twist to inequalities: they "should be" unit-independent. Or at least equipped with an order relation that axiomatizes the expectations. You could as well define "greater" as the largest on the denominator of reduced fractions. But this would be a very mundane "greater" definition.

What this can teach you is to be aware of logical fallacies in the real world, like a merchant offering you a price so good that he loses money on it. This could incite you in a duel in the manner of the barometer question:

A physics student at the University of Copenhagen was once faced with the following challenge: "Describe how to determine the height of a skyscraper using a barometer."

an anecdote mocking the stereotypical answers sometimes required from students.

So I will play the devil's advocate even if I personally abhor this "new math" business as much as anyone. The first professor I TA'd for in the US had a very strange style of teaching and one of his tenets was "Answer the question I wanted to ask not the question I asked." What he meant was use all the information you have at your disposal when answering questions. If you are asked to differentiate $f(x)=x^4+ax^3+b$ and not told that $a$ and $b$ are constants point out that you assume it (since the usual convention is that we use letters early on in the alphabet for constants) and differentiate with regards to $x$ even if it's not specifically spelled out.

The reason he gave for this was that in life people rarely asked fully defined and reasonable questions and the trick was to answer correctly even when the questions were ill-defined. I wasn't really convinced then, but having since TA'd for many other professors I found that the students he taught were head and shoulders above the rest in their mathematical understanding both as measured by the exams we gave and as measured by success in further mathematics courses they took.

The point here being that while the questions is certainly ill-posed and strange, if the students so far never really talked about what a real number is, but rather spent the time talking about 1/2 and 1/4 of bigger and smaller things and how 1/2 of a orange can weigh less then 1/4 of a melon, the answer seems much less nonsensical. The fact they are asked to "prove" the answer gives further credence to this possibility.

EDIT: To further clarify: The context of the question is important. What lecture time had been spent on lately and what the other questions on the exam are might have a big impact on just how crazy this question really is. A perfect example was given in the comments below the OP question.

If you ask "Does an elephant weigh more then a cat?" in the course of normal conversation the appropriate response is surely "Yes." If on the other hand the same question is posed as part of a physics lecture on the difference between weight and mass the correct answer is almost certainly "Depends on where each of them is. If the elephant is on the ISS and the cat on earth the cat weighs more."

Furthermore rereading the "proof/explanation" it seems a little as if the student might be trying to give the "correct" reasoning for exactly this strange interpretation:

Certainly that is a lot of extra words but having graded many attempts at proofs of students at a much higher level (college) I can attest that even then this kind of butchering of language is common and the students in those cases had argued that it was obvious that's exactly what they meant.

With more context posted in the OP I must withdraw most of my objections. The context is apparently comparing fractions as rationals. In the light of the extra context, the picture seems to imply not that $1/2<1/4$ but rather that the picture proof was not deemed appropriate. This still does not explain marking the circled "True" as wrong though.

This is a ludicrously badly worded question.

They do have a point. They are not making it intelligible.

What is wrong with this logic?

Or just use an intelligently designed book that teaches this basic level of logic in a way that is easily absorbed by kids.

Possibly another way to refute the counterexample given, is to reduce it to a statement that's more clearly untrue. Suppose $\frac{1}{2} < \frac{1}{4}$. Then, multiply both sides by 4 to get $2 < 1$, which is more clearly false.

So at this point point, the teacher either has to say that the multiplication doesn't preserve the inequality, or (less likely) that the resulting statement is false.

(Though I wouldn't be surprised if they try to refute modus ponens, or the law of the excluded middle, or so on)

Not the answer you're looking for? Browse other questions tagged arithmetic education fractions or ask your own question.

1068
How long will it take Marie to saw another board into 3 pieces?

9
Apparently cannot be solved using logarithms
2
Factoring/approximating an apparently simple formula
2
Why in formulas a return value of a function sometimes shown as an argument?
1
How and why can it be true that some decimals that sometimes go on forever in base 10 such as $1\over 3$ change to good numbers in base 12?
6
How to explain why Integration by parts apparently "fails" in the case of $\int \frac{f'(x)}{f(x)}dx$ without resorting to definite integrals?
0
With the goal of having a function defined for all values of x, why can you only sometimes simplify a fraction, making divisor not equal zero?
3
Is the sum of two linear expressions always a linear expression?