Compactification of the integers

With the usual discrete topology, $\mathbb{Z}$ is non-compact.

I wonder if it is possible to make $\mathbb{Z}$ compact; I think there are many different ways to do so.

I've heard about the following idea:

Consider the stereographic projection of the closed lower semi-circle as illustrated in the Picture below, where $\mathbb{Z}$ is embedded in the $x$-axis and where the Points $(\pm 1,1)$ represent $-\infty$ and $+\infty$, respectively. I guess

2) Why is this now compact?

3) As a metric one can use the arclength metric?

4) I guess this has nothing to do with one-point compactification? 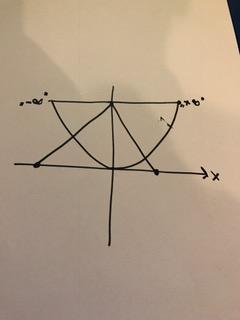 Observe that this is similar to embedding $\mathbb R$ in the extended reals $\overline{\mathbb R}$. The extended reals are just $\mathbb R$ with $-\infty$ and $\infty$ joined to each end. The extended reals are of course compact (since the space turns out to be homeomorphic to the interval $[0,1]$). Basically, what your construction does is considers $\mathbb Z$ first as a subspace of $\overline{\mathbb R}$ and then takes the closure - which includes $-\infty$ and $\infty$. Then, a closed subspace of a compact space is compact.

Note that, you can show your construction gives a compact space rather directly, since it identifies $\mathbb Z$ with a closed and bounded subset of the plane, which must be compact. You can also directly show that, if we let $\overline{\mathbb Z}$ be the new topology, then a subset $U$ is open if and only if it satisfies two conditions:

I don't know if I'd call this "well-known", but it is implicit in a lot of places - for instance, if you take a limit $$\lim_{n\rightarrow\infty}(1+1/n)^n$$ then, you are implicitly using this topological space to define $\infty$.

Not the answer you're looking for? Browse other questions tagged general-topology compactification or ask your own question.