What's wrong in this effort to describe equilateral triangles algebraically?

Today I was working on a spreadsheet to generate equilateral triangles. I perceived the question in terms of finding values for a, b, f and g in the following diagram so that the red dots are equidistant. 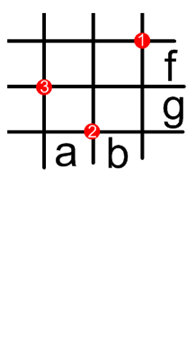 Each distance is a hypotenuse and so describable with the Pythagorean Theorem. (The given values are the squares of the hypotenuse, but I think we can use them instead of the roots.)

From there it seems a system of three equations. But something funny happens when I try to simplify.

It seems to me that tautologies arise for two reasons: all numbers are solutions, or we substituted an equation into itself. Neither seems to be the case here. So what happened? Can you suggest a comparable (but correct) way to generate the vertices of equilateral triangles in Excel?

You've simplified two of the equations and substituted the results into the third, which yields a tautology.

The reason we only have two equations is that the system has two degrees of freedom.

Not the answer you're looking for? Browse other questions tagged triangles coordinate-systems or ask your own question.