It is quite easy to see why $f(z)=\bar{z}$ isn't complex differentiable.

But I struggle to see why this is the case.

Visualization of the conjugate function in my head is simply flipping the complex plane upside down. I don't see how this creates any discontinuities.

Am I having the wrong visualization or have I misunderstood complex differentiability?

Of course it doesn't satisfy one of the possible definitions (Cauchy-Riemann equations, the specific limit does not exist), but in my opinion that doesn't give you much intuition - at least of the geometric kind. Hopefully the following will compensate for that.

If $f$ is differentiable at a point $z_0$, then there's the linear function $$(Df)(z_0)\colon \mathbb C \to \mathbb C;\quad z \mapsto f'(z_0)z $$ that approximates $f$ well around $z_0$. Multiplication by a complex number is a rotation or a scaling of the complex plane, thus it keeps orientation.

These imply that $f$ has to keep orientation locally, around $z_0$. Conjugation is a reflection so it flips orientation, therefore it cannot be differentiable at any point in the complex sense.

As you can see in the $r=0.1$ case the red and blue circles are almost equal. As $r \to 0$, the difference becomes smaller and smaller. That's what I meant by locally almost keeping circles.

Here's another picture, displaying the image of a point from each of the two black circles. The black and blue circles represent the same as before, the green circles are due to the $\omicron(r)$ part. 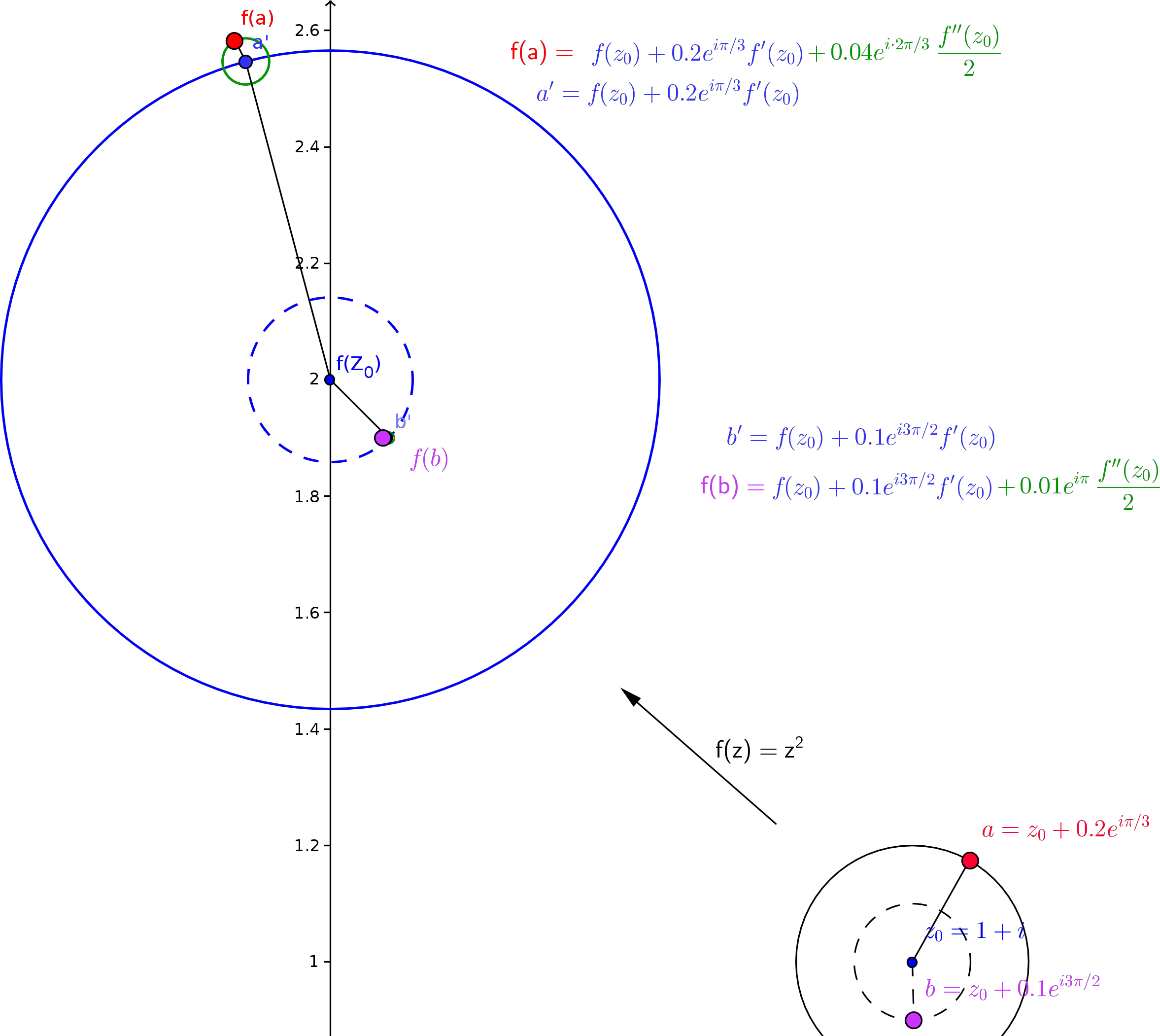 In fact, in the $r=0.1$ case the green circle is so small, you can barely see any of it (this is why the red and blue circles from a moment ago were almost equal).

As you can see, the image of a circle is essentially the sum of multiple circles, in this case, two; however, if $f$ has lots of non-zero derivatives, then there'll be lots of circles, and each "new" circle will have smaller radius, but higher frequency than the previous one (assuming $r < 1$).

If you know about Fourier-series, then this concept might sound familiar. By the way, if you haven't already, read this answer.

Hopefully I've convinced you that the $\omicron(r)$ part is not significant. (Of course only so if the first derivative is non-zero, but in the other cases we can say something similar too.)

$f$ does not create any discontinuities ! $f$ is continuous, but not complex differentiable.

To be complex differentiable (holomorphic) require more than differentiability for a real function (that, anyway, is more than continuity) because we need that the limit of the incremental quotient have to be the same ''from any direction'' in the Argand Plane. You can see a good illustration of the case $f(z)=\bar z$ here.