What's your explanation of the Raven Paradox?

The Raven Paradox starts with the following statement

which is equivalent to the following statement

(2) Everything that is not black is not a raven.

Now, whenever we see a Black Raven, we see an evidence which supports the statement 'All Ravens are Black'. So, if we see more and more black Raven, then our belief gets stronger and stronger that all Ravens are black.

But since the statements (1) and (2) are equivalent, so collecting evidence supporting statement (2) is also an evidence that all Ravens are black. So, if we see , for example, a red apple, then it's an evidence supporting that 'All Ravens are Black'. It's because 'A red apple' is neither black (because it is red) nor is it a Raven (because it's an Apple. Apples can't be Ravens, can they?).

This conclusion seems paradoxical, because it implies that information has been gained about ravens by looking at an apple. Also, the evidence is completely unrelated. I attempted to explain it but I'm not completely convinced by my explanation.

How can we resolve this paradox?

EDIT: It can be used to collect evidence supporting completely false statements like: 'All dinosaurs are educated'. Because we've seen plenty of things until now which are neither educated nor they're dinosaurs.

EDIT2: I think that the paradox still remains. If we have a journey and took a look at every non-black thing in the universe and found it to be non-Raven, then from this argument it should be proved that all Ravens are black. But that's paradoxical because it would mean false statements can also be proved by taking a look at everything else.

There are approximately 16 million ravens in the world (source: International Union for Conservation of Nature), so if you see a black raven, you've got a very tiny bit of evidence for your hypothesis: you're about $6.25\times 10^{-8}$ of the way to a full proof.

There are about 10 quintillion insects in the world (source: Smithsonian). There are a lot of things in the world that are not insects (source: I really should tidy my desk). Let's say, conservatively, that there are 20 quintillion things in total. About 79% of them aren't black (source: DuPont; they were only counting cars, but I'm going to assume that's a representative sample). So if you saw one non-black thing that wasn't a raven, that gives you a really really tiny bit of evidence for your hypothesis - you're about $2.5\times 10^{-16}$ of the way to a proof, i.e. 1 red apple $\approx$ 4 nanoRavens.

An intuitive explanation of why evidence for the second statement carries less weight is that there are far more not black things than ravens.

Suppose that you are sampling marbles from a bag. Suppose that you draw 5 and they are all black; what is the probability that all in the bag are black? You need to know how many are in the bag. Try 10, 100, 1000, etc.

First things first. From a mathematical point of view, statements (1) and (2) are clearly equivalent and that's all there is to it.

All the rest of the "argument" is completely heuristical. When I say "heuristical" I mean the words/concepts:

which are used terribly imprecisely and happily lead to the disguised "paradox". If you care to define mathematically the words listed above, then a mathematical discussion is possible where we may or may not reach the conclusion that there is a paradox here. Such a chain of "arguments" leads to no paradox at all, at least not a mathematical one. A good example of a true mathematical paradox is Russel's famous paradox, whose conclusion lies well within mathematical definitions, and so finally forces us to abandon the notion of a universal set of all sets being a set. This however, is nowhere close, and hardly provides any interesting insights into mathematics.

Here an answer a bit different. It is an "extreme" case, but it may convince you that finding something that is not a raven and it isn't black is evidence that all ravens are black:

Let's say there are only 7 things in the world. 4 of them are ravens, and 3 of them are not ravens. 2 of the non-ravens are also not black.

If you want to prove that all ravens are black you could check all of the 4 ravens, so each raven is 1/4 of the total evidence you need. Or you could also check if the 2 non-black things are not ravens, so each of the two things would be 1/2 of the total evidence you need. So checking that a non-black thing is not a raven is a stronger evidence than checking that a raven is black! After you have checked that all the non-black things are not ravens, you know that no raven will be able to be non-black anymore. So the ravens will be black.

Maybe the above sentences were a bit difficult to parse, so here some Venn diagrams to look at while reading: 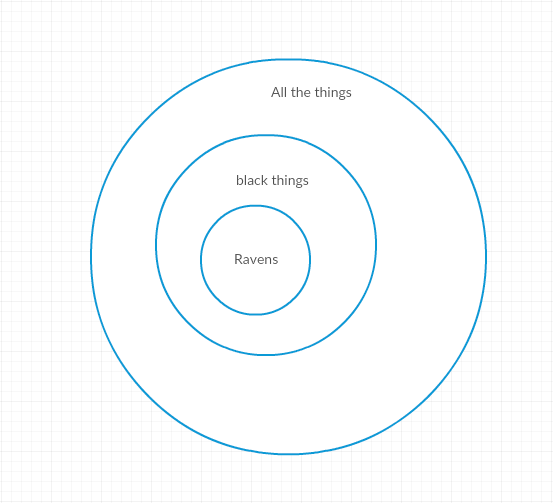 These simple set theory considerations, together with the arguments about probability that other answers gave should give you a pretty clear overall picture.

I'm inclined to be Bayesian about this, and for the basic approach, see e.g. the Wikipedia article.

But it isn't trivial to get the details right. If anyone really wants a careful account of Bayesian (yep, some maths!) treatments of the Ravens Paradox, then

How Bayesian Confirmation Theory Handles the Paradox of the Ravens

is helpful (Lemmas! Theorems!!) at bringing out some of the complications while aiming to give a "Best Buy" Bayesian response.

I'm not hereby fully endorsing that account by Branden Fitelson and James Hawthorne -- but it is salutary reading for anyone inclined to think that it is trivially easy to find a satisfactory response to the issues at stake.

If you see a number of red objects, and none of them are ravens, you gain the "evidence" that a) there exist red objects, and b) none of them are ravens. With sufficient amount of such observations, you might conclude that it's not likely for red ravens to exist (in the group of objects your samples are drawn from). Similarly for any values of red.

Of course this is only statistical evidence at best, and a heuristic at worst (as others have noted), and it only gives you information about objects in the set your samples are drawn from.

Let $Q$ be the proposition that all ravens are black. When we make an observation $O$ of something that isn't a black raven, we update our probability estimates (in the form of the ratio of the probabilities for and against $Q$) as

So, what are the probabilities:

If these are equal, then the evidence both for and against the proposition cancel out, so that observing a red apple tells us absolutely nothing about $Q$.

The paradox is the mistake of trying to make a one-sided analysis — most observations are consistent both for and against a proposition, and one must weight the evidence appropriately.

Some cases, such as seeing the sun rise being consistent with the sun not existing are very weak and for practical purposes can be ignored. But this problem is not one of those.

(yes, this is consistent; e.g. it could be a hallucination, or you're tricked into seeing a recording, or a freak atmospheric event, or ...)

Here's how I tried to explain it but I'm not completely convinced by my explanation:

Now, this happens if we try to prove all Ravens are black by collecting evidence of the second statement:

If the set of all things in the universe except Ravens is $R'$ and the set of all colors in the universe except Black is $B'$, then to prove that all Ravens are black, we've to cross out everything in the set $R'\times B'$. Both $R'$ and $B'$ are infinite sets. Now, observing a red apple is an evidence that All Ravens are black. But such an evidence doesn't contribute anything significant to our belief that All Ravens are Black. Because crossing out $(Apple, Red)$, from the infinite set $R'\times B'$ doesn't contribute anything finite to proving All Ravens are Black.

But I've assumed that there are 60 Ravens. If there are an infinite number of Ravens in the world, then observing a Black Raven also won't contribute anything finite. But I believe that observing a black Raven is quantitatively a better evidence than observing a non-black non-Raven.

What if there were two kinds of Ravens $R_A$ and $R_B$ such that all $R_A's$ were black and all $R_b$'s were brown? And both $R_A$'s and $R_b$'s are found equal in number in any area. Then, I think we could consider these two statements:

(2)Everything which is not black but is a Raven is not a $R_A$ Raven.

0
I see a white poodle. Does it increase the probability that all crows are black?