Why does Brownian motion have drift on Riemannian Manifolds?

My question is conceptual and geometric in nature: how can there be a drift term in this equation?

Algebraically, I understand, roughly speaking, that it arises from the extra temporal terms in Ito's formula. However, in a general relativity sort of way, one can consider $g$ to be a "warping of space" (say for $M=\mathbb{R}^n$), and we note $g$ is always symmetric. The metric does not depend on directions, but only on locations (unlike say for Finsler manifolds). In other words, acceleration in one direction due to the curvature also occurs in the opposite direction, meaning the effect of the curvature on the diffusion is also symmetric. So, geometrically, how can $\vec{b}$ exist, as it by definition favors some particular direction?

This is even weirder to me when I think about Riemannian normal coordinates (say at $p$), where $g_{ij}=\delta_{ij}$ and thus $\Gamma^k_{ij}=0$ at $p$. Thus, $\vec{b}=0$ at $p$, in that system. One can do this at every point. I suppose the drift would not disappear off of $p$, but it still seems odd to me that the presence of drift would not somehow be an invariant. Undoubtedly, I am missing something here.

I think something to do with the heat equation generating the SDE above, i.e. $\partial_t u = \Delta_g u/2$, may be useful.

Edit: It's useful to note that the term "drops out" of the equation for the Laplace-Beltrami operator in local coordinates (see the cross-posted version of this question on MathOverflow).

Some intuition can be gained by noting that this term appears even in the flat case if you choose curved coordinates. For example, on $\mathbb R^2$ you could choose a coordinate system near $p$ looking something like this: 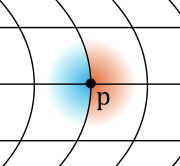 Geometrically, it's clear that short-time Brownian motion (defined in some invariant way) starting at $p$ is more likely to end up in the red region. If you were to define $dX_t = \sqrt{g^{-1}} dB_t$ in these coordinates then the blue and red regions would be equally likely, since in coordinates they are just two sides of an axis. Thus we need some drift term pushing towards the right to compensate for the curvature of the coordinate system.

In stochastic differential geometry, as developed by Meyer and exposed by Emery in his book, the drift of a stochastic process may only be defined via an affine connection.

Recall that, in differential geometry, affine connections distinguish curves which have zero acceleration, or geodesics. There is no sense in saying that a curve is a geodesic, if one has not specified a connection, beforehand.

Intuitively, one can think of the stochastic differential $dX$, of a stochastic process $X$ on a manifold, as a random second order vector. Let us say that $\Gamma$ is an affine connection. The drift of $X$ with respect to $\Gamma$ is equal to the random vector $\Gamma(dX)$. In particular, if $\Gamma(dX) = 0$ then $X$ is a $\Gamma$-martingale!

This definition (you can find all computations in Meyer and Emery) shows that, indeed, a martingale in a manifold is a process with zero drift. The drift you are talking about is an artefact which appears when working in a general, perhaps not well-chosen, coordinate system.

Note that the above only uses an affine connection, which does not have to be metric. A Riemannian metric serves to distinguish a martingale which is a Brownian motion, but drift is not a ``metric property". -- Salem

2
Infinitesimal generator of the Brownian motion on a sphere

5
Approximate expression for the metric in normal coordinates
4
Why is the solution of a stochastic differential equation wrt the Brownian motion suitable for a model of a disturbed time continuous process
1
geometric meaning of the second fundamental form in a Riemannian manifold
7
Hitting times by Brownian motion
4
Filling Riemannian manifolds, Gromov, Proposition 5.1.B