Trigonometry: know the value of $\sec$, need to find $\tan$

I want to use a geometric method to solve this question since I know how to do it via trigonometric identities. I use the following definition provided by my book: 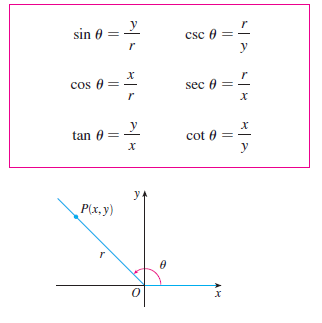 Things are a little confusing since $x$ is both a coordinate in the figure you're using to define the $\sec$ function and also a variable in the problem you're trying to solve. So I'll write $t$ for the horizontal coordinate in the figure and formulas for the trigonometric functions, and therefore $$ \sec \theta = \frac rt \quad\text{and}\quad \tan \theta = \frac yt. $$

Now it appears that what you have done is, you have observed that when $0<\theta<\frac\pi2,$ so that the ray at angle $\theta$ lies in the first quadrant, there is a right triangle with leg $a$ adjacent to an angle of measure $\theta$ that "fits" perfectly between the ray and the horizontal axis, and the length of the hypotenuse of that triangle is $x.$

Now you expect to find a triangle whose side lengths you can similarly identify that fits in the same way between the horizontal axis and the ray at angle $\theta$ when $\pi < \theta < \frac{3\pi}{2}.$ There is, in fact, a suitable right triangle that has a hypotenuse of length $\lvert x \rvert > 0.$ There is just not a triangle whose hypotenuse you can naïvely label $x,$ expecting that label to makes sense as a length.

The variables $t$ and $y$ that show up in the definition of the trigonometric functions for general angles are not lengths of the sides of the triangle; they are coordinates of the other end of the hypotenuse, away from the origin. Unlike the sides of a triangle, these coordinates can be negative.

You can, if you like, construct a right triangle in the third quadrant with vertices at $(0,0),$ $(-a,0),$ $(-a,y),$ choosing $y$ so that the point $(-a,y)$ is on the ray at angle $\theta.$ Then the leg of that triangle along the horizontal axis will have length $a$ (the distance between $(0,0)$ and $(-a,0)$; observe that it is perfectly sensible to have a positive distance to a point that happens to have a negative coordinate). The hypotenuse of that triangle will have length $-x.$ The length is not $x$; the definition of $\sec\theta$ for a general angle $\theta$ never says that $a\sec\theta$ will be a length when $a$ is a length.

That's about as close as you can get to an accurate labeling of a triangle in the third quadrant comparable to the triangle you can construct in the first quadrant.

Yes, it can be confusing to know when the hypotenuse of a triangle should be said to have length $x$ and when it should have length $-x.$ I think that is a big part of the reason why the figure and formulas you found define the trigonometric functions of a general angle in terms of Cartesian coordinates instead of drawing a triangle.

Rewritng $-x = (-a)\sec \theta$ should lead you in the direction you want.

However, it is a bit confusing to write $P(x,y)$ when the letter $x$ already stands for something other than the first coordinate of $P$, so rather than write $P(x,y)$ instead I'll write $P(\tilde{a},\tilde{b})$ for the point on the terminal side of the angle $\theta$.