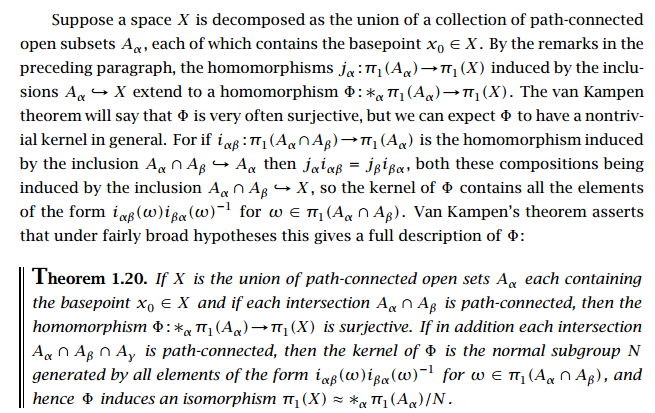 This is well known Seifert-van Kampen theorem for which I am asking any help in order to make a clear picture of it.

Now, in most of my "first" exercises I'm working in such a way that I am usually able to find "only" two such open, path-connected subsets of $X$, usually denoted by $U$ and $V$.

My idea is to take for one set a small nbh. of $0$ and for another the complement of zero.

Okay, for the first case I know that the image of the generator of $\pi_1$ of the intersection is trivial since the other space is contractible to a point,

and, at the end, how to conclude what my final fundamental group is?

Can I suggest you view your topological space in a slightly different way?

Can you convince yourself that this is the same space as what you described?

Finally, Van Kampen tells you that $\pi_1(X)$ is generated by $\gamma_U$, except that the element $4\gamma_U$ should be identified with the element $0$. This group is precisely $\mathbb Z_4$.

As often happens with applications of Van Kampen's Theorem, you'll need to carry out some intermediate steps to settle this. I suggest the following two steps.

First, you'll need to understand that there is a deformation retraction from the complement of zero in $X$ and the subset of $X$ represented as $\mathbb{S}^1 / \sim$. This let's you set up an isomorphism between their fundamental groups.

Second, you'll need to figure out the fundamental group of $\mathbb{S}^1 / \sim$.

Combining these, you will obtain the understanding of the fundamental group of the complement of zero that you need to continue the problem.