I'm stuck on a mathematical riddle from Dudeney's Amusement in Mathematics.

I will write here the text of the riddle and my attempt. I just don't get how to proceed further.

Seven men, whose names were Adams, Baker, Carter, Dobson, Edwards, Francis, and Gudgeon, were recently engaged in play. The name of the particular game is of no consequence. They had agreed that whenever a player won a game he should double the money of each of the other players—that is, he was to give the players just as much money as they had already in their pockets. They played seven games, and, strange to say, each won a game in turn, in the order in which their names are given. But a more curious coincidence is this—that when they had finished play each of the seven men had exactly the same amount—two shillings and eightpence—in his pocket. The puzzle is to find out how much money each man had with him before he sat down to play.

Hence at the end they all have $32$ p, which means in total there are $224$ p since there are seven players.

$A$ is the first and he possesses $a$ pence, hence the other ones, in total, have $R$ pence.

The first useful equation is trivial and its

Now: $A$ wins first, hence he has to pay everyone else twice what they have.

But then he always loses (other wins), and each turn until the end $A$ gets his sum doubled. In this way the turn are described by:

Now my problem is to understand how to get the sum of the other players. I tried with a similar method but I failed.

It is essentially bookkeepping (or literally bookkeeping, since they are playing for money). Working backwards, each player has half as much as the subsequent round, except the "winner" of the next round additionally has half the total of $7\times 32=224$, so $112$ more than half. 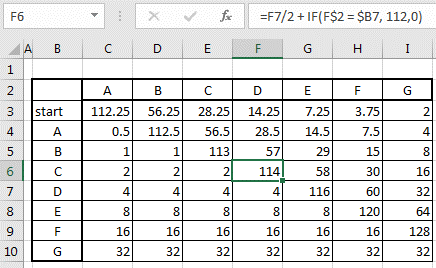 Not the answer you're looking for? Browse other questions tagged discrete-mathematics recreational-mathematics puzzle or ask your own question.

3
Nim Variant (reducing by divisors)
0
Game: removing coins from two stacks.
6
Weighted War - Game of Mind and Probability
0
A Maths exercise from school I couldn't solve with a system of equations
1
Passing Shillings
0
Strange mathematical riddle, from Dudeney's Amusements in Maths.
1
A riddle about motion and distances
1
What is the minimum amount of moves it takes to finish this game?