Doubt on approximation of area under the curve

In Simmons' Calculus with Analytic Geometry, on pg. 221, the following formula is provided to evalute the area under some curve: 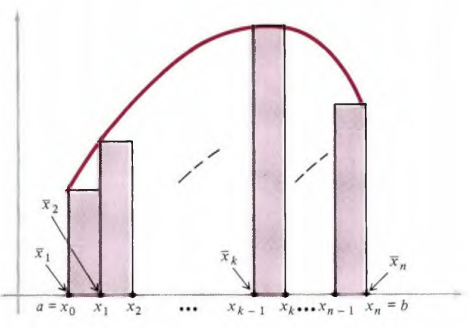 But then the book goes on to state that that formula is equivalent to:

My question is: why are these formulas equivalent? I understand why the first one yields the desired result, but I can't see how we can evaluate the area under the curve by the second one. Any clarification will be appreciated. Thanks.

The first one is not entirely clear because it doesn't say what $x_k$ actually are. In the figure it looks like you have $x_k=a+\frac{k(b-a)}{n}$ (the uniform partition), but that isn't made explicit.

The second one is saying that it doesn't really matter what $x_k$ actually are: as long as you partition $[a,b]$ into subintervals and the lengths of all those subintervals go to zero, you will recover the same limit (for a nice enough function, in particular for a continuous function).

What's going on here is the following. I won't go into too much detail because exactly these things are discussed in any undergraduate-level real analysis text. (I learned from Strichartz The Way of Analysis, which has a few serious flaws but I generally like.)

We define Riemann integrability in the absolute most restrictive way we can think of. We define an "evaluation partition" of $[a,b]$ to be a pair of finite sequences $(\{ x_k \}_{k=0}^n,\{ y_k \}_{k=1}^n)$, subject to the following conditions. (Note that this is not a standard term in the literature.)

We define the Riemann sum for an evaluation partition $P$ and a bounded function $f$ to be:

We define the mesh $m(P)$ of an evaluation partition $P$ to be $\max_{k=1,\dots,n} x_k-x_{k-1}$. (This is a standard term.) We say a function is Riemann integrable if for any sequence of evaluation partitions $P_n$ whose mesh goes to zero, $R(f,P_n)$ converges to a single universal limit.

Now this definition is horrible, because it tells us to check for evaluation at totally arbitrary points. We can make it easier to use by focusing only on the partitions with evaluation points $y_k=\arg \min_{x \in [x_{k-1},x_k]} f(x)$ and $z_k=\arg \max_{x \in [x_{k-1},x_k]} f(x)$. (The former is what is suggested in your definition). The former sum is called the lower sum; the latter sum is called the upper sum. Restricting attention to just these evaluation partitions (still leaving the $x_k$ part arbitrary) gives us a criterion for so-called "Darboux integrability".

The obvious question is now: is Darboux integrability the same as Riemann integrability? The answer is yes. The gist of the reason is that if we fix any partition $x_k$ and we look at evaluation partitions $(x_k,y_k)$ and $(x_k,z_k)$, the difference between their Riemann sums is less than the difference between the lower and upper sums for the partition $x_k$.

Finally if we want to make use of this, we should prove that continuous functions are Riemann/Darboux integrable. This requires an intermediate lemma, called the Heine-Cantor theorem, which says that continuous functions on a compact set like $[a,b]$ are uniformly continuous. With this in hand, we have a uniform modulus of continuity $\delta(\epsilon)$, and now we can ensure that the upper and lower sums are within $\epsilon$ of each other provided that our partition has mesh less than $\delta(\epsilon/(b-a))$. Note that in the special but common case of continuously differentiable $f$, $\delta(\epsilon)$ can be taken to be $\epsilon/M$ where $M=\max_{x \in [a,b]} |f'(x)|$.

Ian's answer is very good. I will provide a slightly more particular point of view, assuming $f$ is continuously differentiable and $\Delta x_i$ is a constant $\Delta x$.

Now, my choice of points $c_i$ at which to evaluate $f$ is rather particular and may differ from your choice $\bar{x}_i$. I'll show that, as long as $\Delta x \rightarrow 0$, the difference in calculated area coming from different choices of points is negligible.

3
Integral and Area of a section bounded by a function.
6
How did Newton (or whoever invented the process) come up with the idea that the anti-derivative can be used to calculate the area under a curve?
2
What is the proof of integral theorem i.e area under curve is given by anti derivative?
0
Length of a curve || Deriving formula
0
Area under curve using Riemann Integrals
4
Arc length of a Polar curve as a Riemann sum