I tried to explore the identity $(4)$ in page 35 from (currently you can read this page as a Google Book) Edwards, Riemann's Zeta Function, Dover Publications (1974), that is Riemann's asymptotic formula for the prime-counting function $\pi(x)$. My idea to get this exploration was take the derivative with respect $x$ of $RHS$ of $(4)$ from Edward's book using the Fundamental Theorem of Calculus, thus I've obtained $$\text{speculative derivative with respect }x \text{ of }\pi(x)\sim^? \frac{1}{x\log x}\sum_{n=1}^\infty\frac{\mu(n)}{n}x^{1/n},\text{ as }x\to\infty $$

(the symbol ? above the asymptotic equivalence means that it is the thesis of Newman's theorem) and after do a comparison with Newman's theorem for asymptotics and derivatives. The background of this speculation is that there is an issue (a conjecture) about the convexity of the prime-counting function (note that I know that there is no mathematical meaning of a derivative $\frac{d}{dx}\pi(x)$ or the convexity of our prime-counting function using the criterion for the second derivative, since $\pi(x)$ is discontinuous).

My question is independent of previous two references, in the corresponding two paragraphs. But if you want to read the cited references and criticize after my idea in comments feel free to add your ideas.

Question. Let $\mu(n)$ the Möbius function and $\operatorname{Li}(x):=\int_2^x\frac{dt}{\log t}$ the offset logarithmic integral. Is it possible to prove or refute that $$\frac{1}{\sum_{n=1}^\infty \frac{\mu(n)}{n}\operatorname{Li}\left(x^{1/n}\right)}$$ is a convex function? If you can add calculations/reasonings it is the best, but I will accept answers as a plot of such function to know if it seems convex. Many thanks. 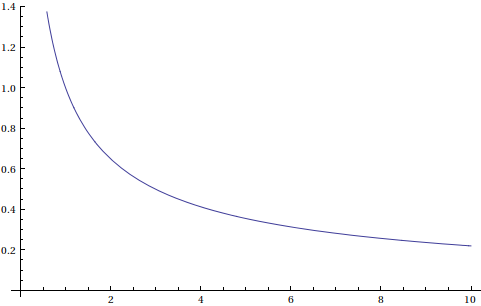 convexity in a left neighbourhood of $+\infty$ is evident.