What could be an example of a real life situation for which an implicit function may arouse?
In real life, while plotting a value against the other, wouldn't it be the case that the function would not be implicitly defined?

This relates to the understanding

In a "real life situation" you usually have a model that relates the values of two variables. For example, the number $E$ of software engineers looking for jobs and the average salary $S$ offered are related. When the industry is hot companies need developers and pay more to attract them. When schools graduate more engineers than the industry needs, starting salaries are lower.

An economist could ask two kinds of questions:

In general, in real life problems you may not have one particular variable that you think of as the independent variable that others depend on. You just have relations among variables.

Here's an example from an answer to one your blender questions (https://blender.stackexchange.com/questions/56715/what-to-pay-attention-when-modelling-for-animation):

You need to consider how the model will be animated, think of the arm being lifted and swung around, think of extremes like swinging from an overhead bar or doing a high roundhouse kick, your model needs to be deformed by the armature without the shoulders or hips getting kinked and looking unnatural.

In this case the variables (inside blender) that describe the position of the shoulder are related to the ones that describe the position of the extended arm. Your animation makes small changes in the arm as a function of small changes in the animation parameter time. Blender figures out how a small change in the arm changes the shoulder. That's essentially implicitly differentiating the function relating shoulder and arm variables. It's implicit because there is no calculus-like formula inside blender to differentiate. The software computes the small change numerically. The calculus analog would be looking at $\Delta(\text{shoulder})/\Delta(\text{arm})$ before you take the limit of that difference quotient. If you wanted to model how the arm changed when you moved the shoulder you would just use the reciprocal of that fraction.

A vast majority of scientific experiments can be considered to be collecting data that follows some implicit relation. What do I mean? In a typical scientific experiment, you wish to test or investigate an effect, and you have a number of parameters that you think can possibly determine some effect that can be observed via measured quantities. So what you do is to set up a controlled environment where you keep everything else the same and just change the parameters, each time recording the corresponding measurements. A major hallmark of a scientific theory is that it can be verified by reproducing experimental results that it predicts. But actually there is a catch; the point in time cannot be reproduced, and hence all that an experiment can provide are measurements at distinct points in time, and time ends up as a parameter as well. Yet in many models we assume that the physical laws are invariant over time, and hence we can based on repeated experiments deduce some relation between other variables.

Another common way that implicit relations turn up is in dynamic systems at equilibrium. This is because they are often governed by 'balance' equations that constrain the system, which naturally lead to implicit relations between the relevant variables.

For example, consider a titration experiment where we measure the pH of a solution at different points of the titration. Here you might think that given the analyte and titrant, and the initial amount of analyte, the only parameter that is needed to determine the pH of the mixture is the amount $x$ of titrant added. So the curve that we plot will be pH against $x$: 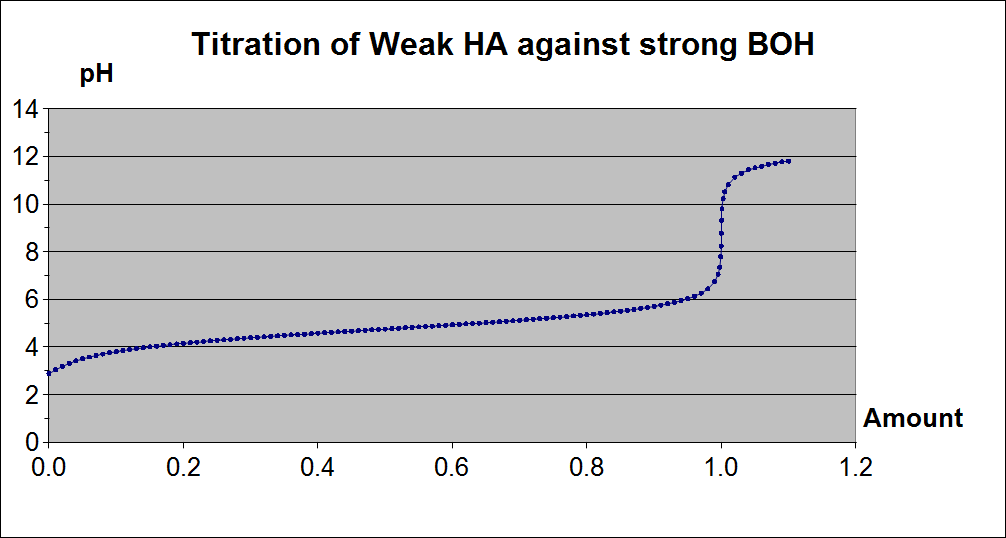 Notice something; the actual titration process corresponds to moving along the curve shown. But we do not actually care how, and indeed repeating the titration shows that the relation between pH and $x$ is independent of how long we wait between each step of adding more titrant. So we have an example of the first kind of implicit relations that arise from ignoring the time parameter.

Furthermore, even in the special case depicted where we assume complete disassociation of the base BOH, we can mathematically prove under standard assumptions (mass balance and charge balance and ionic product of water) that the pH is not a simple function of $x$. It actually turns out to be the logarithm of the positive root of some cubic equation whose coefficients are some rational functions of $x$. So even if we ignore time and just consider $x$ as the independent variable and the pH $p$ as the dependent variable, the relation between $x$ and $p$ can still be considered as an implicit one of the form $a(x)e^{3p}+b(x)e^{2p}+c(x)e^p+d(x)=0$ where $a,b,c,d$ are functions. It so happens that we can algebraically solve for $p$, but it is unimportant. We may also be interested in how fast the pH changes with respect to $x$, in which case it is easy to just use implicit differentiation to obtain the mathematical solution!

You have a circular curve of which you want to know the diameter. You have a measuring wheel to get the arc length and a meter to get the chord. (This is a true real-life situation in road management.)

Then geometry tells you that

Denoting the unknown $y:=a/d$ and the independent variable $x:=c/a$, we get the beautiful implicit equation

Note: we can express the solution as

$$y=\text{sinc}^{-1}x$$ where $\text{sinc}$ denotes the cardinal sine function, but it's inverse is not accepted as valid for a closed-form expression.

$x$ usually denotes an independent variable and $y$ the dependent one. This is why you are interested in $dy/dx$ rather than in $dx/dy$, even though these two derivatives are just the inverse of each other.

26
What do "function of" and "differentiate with respect to" mean?

1
Edited: Implicit Differentiation of Life-History Function
0
Help understand related rates problem: calculating the derivative of the distance function
1
Critical Number real life applications
10
Treating dy/dx as a symbol for the derivative as opposed to a fraction of the differentials dy and dx
0
Confusion over derivative (Calculus perpective )
3
Lipschitz Implicit Function
48
A question about differentiating equations that are impossible to solve for a variable
37
Why isn't the directional derivative generally scaled down to the unit vector?
0
Implicit function theorem for second derivative