Let $ABC$ be any triangle and let $O$ be a point on the line segment $BC$. Show that there exists a line parallel to $AO$ which divides the $\Delta ABC$ into two equal areas.

I have tried by rough geometric figure but failed. I got this from a well known book. Please help me to solve this.

In this solution, I will use area notation as []. In other words, I will express the area of a triangle $XYZ$ as $[XYZ]$.

Note that if $O$ is the midpoint of $BC$, we are done because $AO$ divides $\Delta ABC$ into two equal areas. 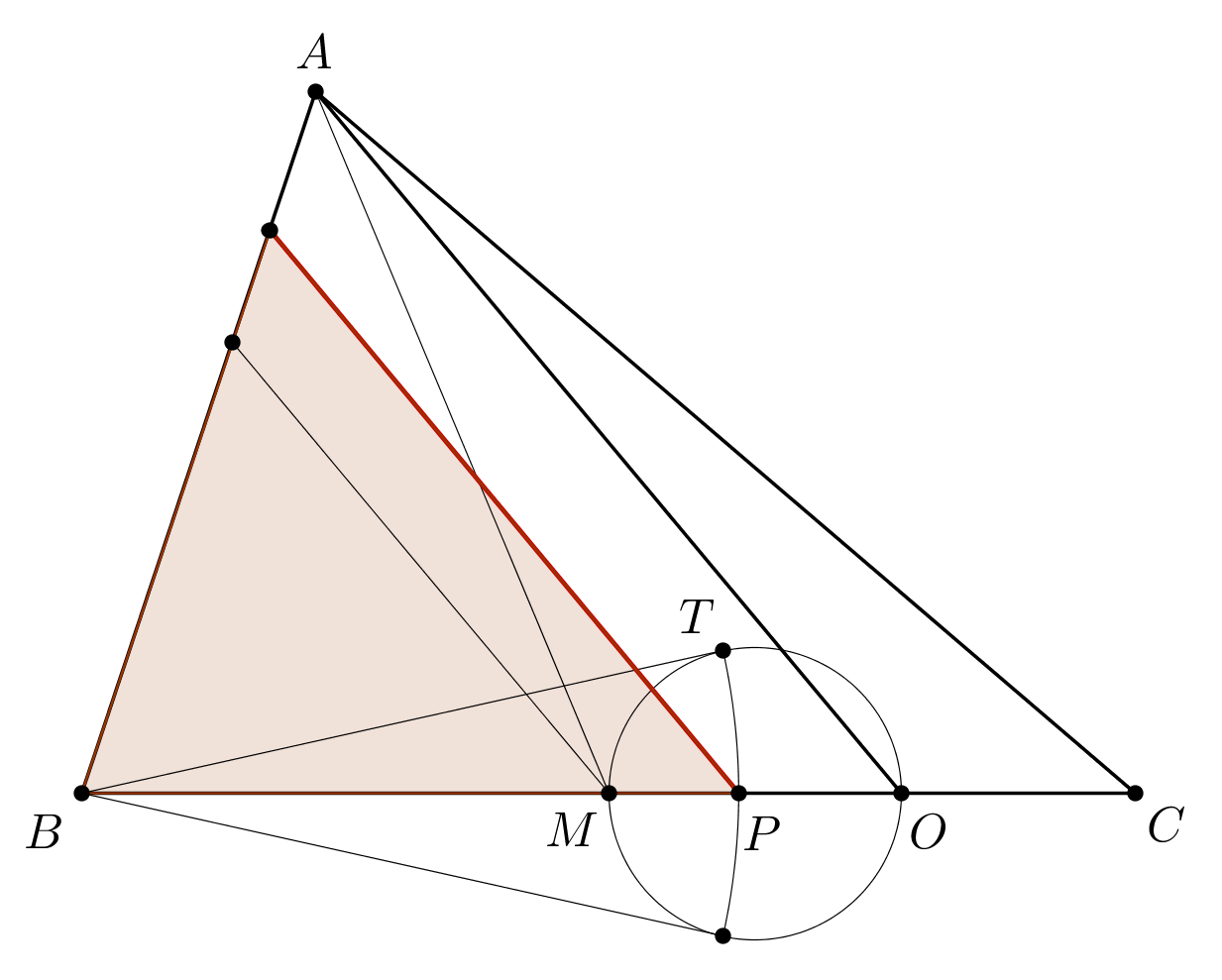 Here it is a straightedge and compass construction:

This is certainly true, just by continuity - we can move such a parallel line so that it divides the triangle in any proportions we chose.

If $O$ is equidistant from $B$ and $C$, the triangle area is already bisected.

Otherwise, assume by labelling that $O$ is closer to $C$, and define $r := \frac{\large OB}{\large BC}$. Define $D$ on $BC$ as where the parallel line must cross $BC$ to bisect the triangle area, and $E$ as the crossing point of that line on $AB$. We can find the location of $D$ as follows:

where $M$ is the midpoint of $BC$. To construct the length $CO_1$ just draw a circle with diameter $CO$ and draw a perpendicualr line to $BC$ at $M$. It will intersect the circle at two points $P,Q$. Now draw a circle with radius $CP$ and center $C$. The intersection of this circle and $BC$ is the point $O_1$

9
Divide a triangle into 2 equal area polygons
1
Dividing a Triangle into Two Parts of Equal Area with Constraints
0
If a trapezoid has bases of length $a,b$, find the length of the segment that is parallel to the bases and divides the trapezoid into $2$ equal areas.
0
Comparison of triangle areas
4
Wallis' axiom for parallel lines
1
Geometry involving circumcenters
0
Given a circle with radius $10$. There are $10$ points $A_1, A_2, \ldots, A_9, A_{10}$ on the circle with equal gap. Find $A_{10}A_3-A_1A_2$.
0
A contest problem in geometry to find triangle ratio $EG$ to $GF$
0
About Euler's line.