How many resistors are needed?

I was told about the following problem. Suppose you have infinite number of resistors with only value 1$\Omega$. Question is

What minimal number of 1$\Omega$-resistors is needed to construct given fraction resistance $R$, i.e. $R\in \mathbb{Q}_+$. 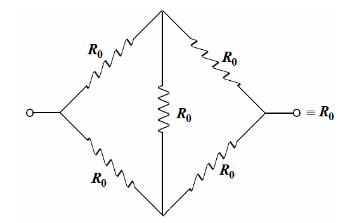 If you know how to formulate this rule better, please, say.

I think that Euclidean algorithm often solves the problem. More over, it is needed to consider only one "half of $\mathbb{Q}_+$", for the other half it is enough to replace +'s by $\oplus$'s and vice-versa.

I was able to find a bound for the number of resistors required.

Given a resistance $\frac{a}{b}$, at least $n$ resistors are required where $\phi_{n+2}$ is the first Fibonacci number greater than or equal to $a+b$.

Here's my thinking process and proof:

Naturally I started out by listing things to see if I could find a pattern.

In other words, (if this is true), given a resistance $a/b$, at least $n$ resistors are required where $\phi_{n+2}$ is the first Fibonacci number greater than or equal to $a+b$.

Since the other day I've played with resistors, and made a program similar to Martin's to enumerate all possibilities that ensure the minimum number of resistors.

Also from this list, I've drawn a picture of the rationnals that share the same $n$. It is quite impressive the see how the bubble expands, but the border of this bubble seems to have an asymptotic behaviour already.

As you can see it is hollow, because many rationnals are not reached for such a low $n$, eventually all the white is to be filled with a superior rank color. 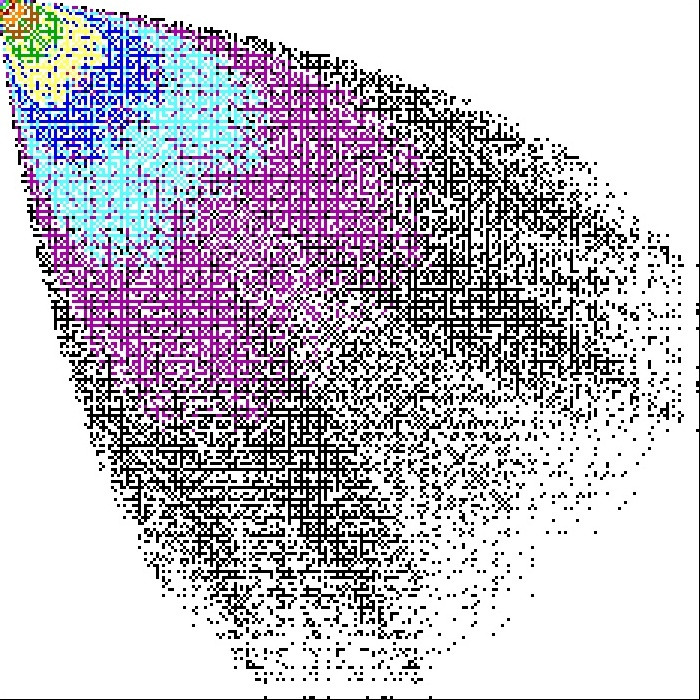 For a better rendering you can download directly the XPM file.

Some convenient notational framework
For the formal handling I' propose a slightly different notation:

Some basic algebraic rules on equal resistors are

Method for creation of the full tree of resistors-configurations
One remark on the example-trees in the other answers.

This latter definition lets us generalize to get a full tree:

The key to the full tree is now, that for $R_4$ all possbible combinations must be collected, which means

I save myself the draw of the (complicated) tree of partial constructions, someone else might do that. But it is to be noted that in this full tree various results occur multiple and we can search for the earliest occurence / the occurence with least number of required resistors. Note, that for instance in $R_4$ we find the element $1r$ which has there the configuration $ (r \oplus r) || (r \oplus r) = \,^2 r || \,^2 r$ having 4 resistors, but of course that element occurs already in $R_1$ and has its earliest occurence there.

I don't see, how one could formalize that earliest occurence in the tree /that "least number of resistors needed for some result" furtherly...

An ordered list for all reachable fractional resistance-values by that vectors $T_k$ (which have duplicates with higher number of resistors removed) shows the following picture (ironically I've written "transistors" instead of "resistors", but that's caused by my old-time education in electronics...) 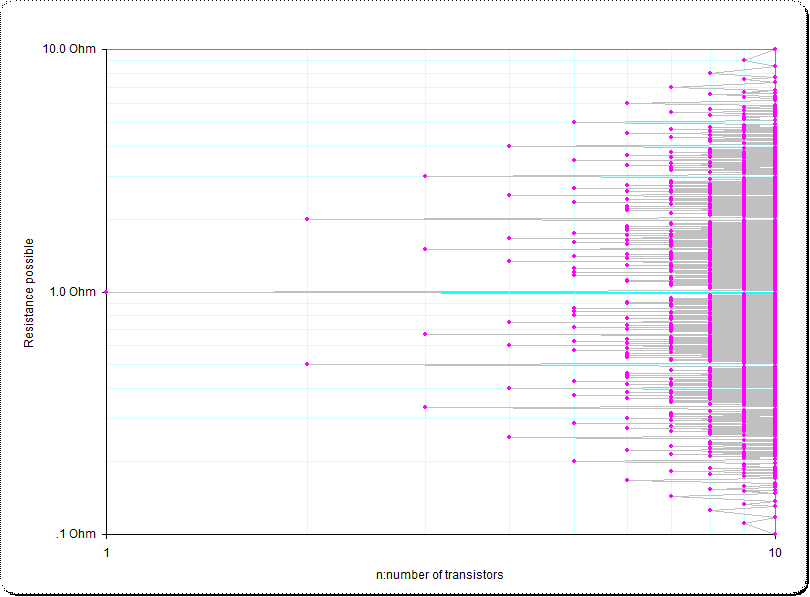 For fractions $<1$ this differs from the Euclidean algorithm initially for $(n-1)/n$:

where the above corresponds with the minimal number of resistors needed for the following fractions:

Table of differences between Euclidean Algorithm and OP: 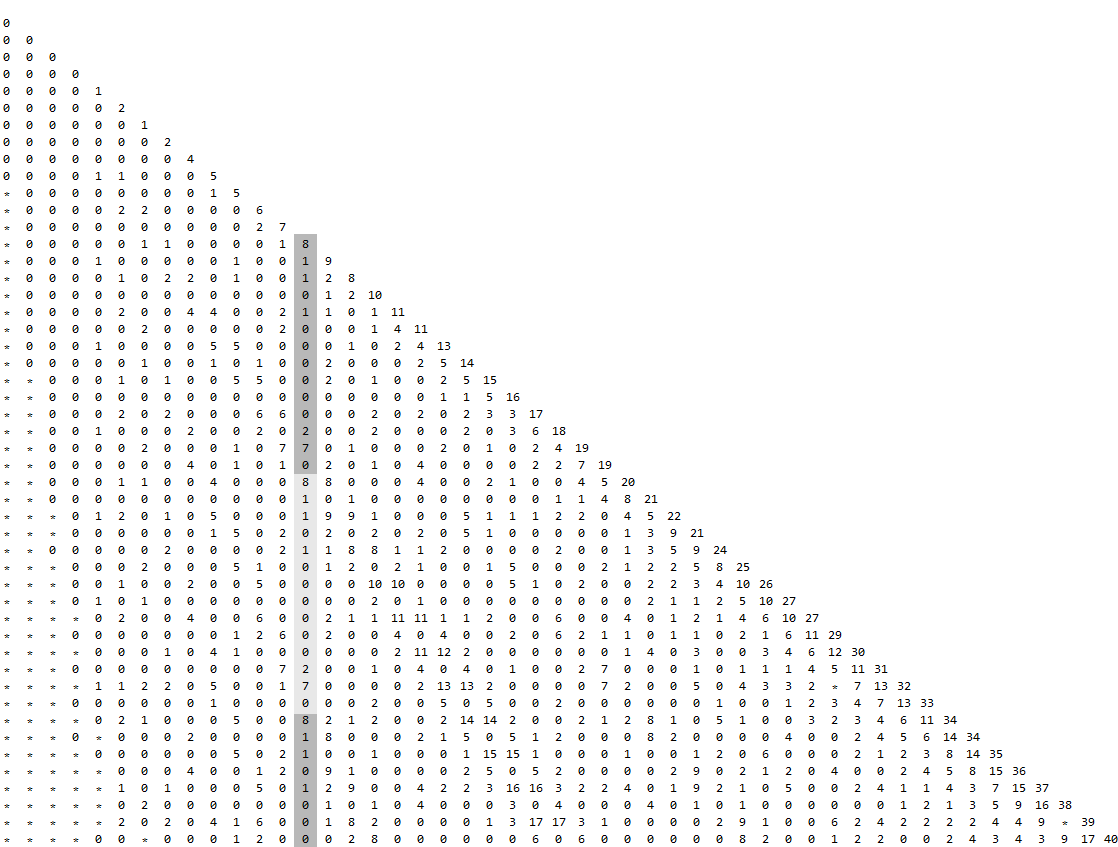 for corresponding fractions up to $49/50$. Note the repeating pattern in each column. This does not hold further down the table however where it starts to exhibit minor changes. The asterists use $>12$ resistors. It is likely the left hand "clump" of asterisks are all $0$ (ie, equivalent to the EA).

Here is a file showing all possible fractions $<1$ generated by up to $12$ resistors, with an example for each one. The notation used is $x(1,1)$ for series and $y(1,1)$ for parallel. Corresponding Mathematica functions for x and y can be found above. 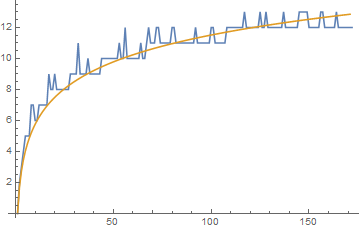 Since this method was suggested in the comments, I'm going to present it, but this is a restriction on the OP problem, in that we consider only adding a resistor either in serie, either in parallel to an existing circuit built in the same way. Thus it is far from representing all possibilities.

If there $n$ resistors then there are $2^n$ arrangements of resistors, basically they are given by the binary developpement where for instance $+$ is associated to $1$ and $\oplus$ to $0$.

It behaves as an arithmetic stack.

This correspond to the well known bijection from $\mathbb N\to\mathbb Q^+$ which has a representation as the Stern-Brocot tree : Stern-Brocot Tree 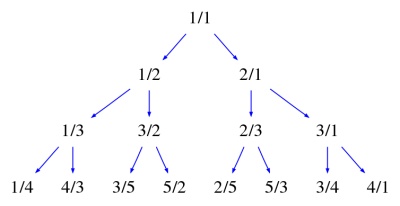 The tree also has this interesting property : Fractions on a Binary Tree II 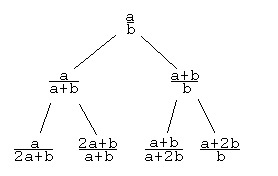 It is not too difficult to prove that our resistors verify these properties.

Note also that the bijection can be explicited :

The case of more complex circuits (i.e. other parenthesizations, and there are Catalan numbers many of them) still need to be adressed. And from Martin's results it seems they lead to shorter circuits.

So even if this idea seems nice because it offers a constructive way to reach every rational resistor, it does not realizes the minimum in term of needed resistors.

Not the answer you're looking for? Browse other questions tagged algebra-precalculus number-theory or ask your own question.

5
Is there a 'natural' bijection between the rational and the natural numbers?

1
Computing Hermite Normal Form using Extended Euclidean Algorithm (modulo $D$)
3
What is this pattern in the Euclidean algorithm?
0
How many objects are needed to cover certain area?
2
How many trips needed?
2
A stupid puzzle, but a reward of pizza
1
Proving an inequality involving euclidean algorithm
2
Show that the elimination of the successive remainders from the Euclidean algorithm leads to a finite expansion.
0
Using Standard Resistance Values, what are the combinations of 2 resistors in series or parallel to achieve a non standard resistance?
10
Did I just discover a new way to calculate the signature of a matrix?
0
Pefsu problem explanation