I'll try to give a soft answer to what I see as the spirit of the question, which is not why you get exactly log, but why the behaviour is different when integrating $x^{k}$ for $k=-1$.

The way I see it is that the logarithm would actually be there for other powers of $x$ too, but it's "hidden" by the fact that in a geometric series one term "gobbles up" all the others together, except in the very special case when all terms are equal. Put in other words, the intuition is very close to the reason why $\sum_{i=a}^b c^i$ can be reasonably approximated by just the first term of the sum ($c^a$) if $c<1$, and just by the last ($c^b$) if $c>1$, regardless of how large $b-a$ is, i.e. of how many terms you have in the sum. But if $c=1$ no single term dominates all the others, and that's when you have to count them all, and you end up seeing the $b-a$ term "emerge" in $\sum_{i=a}^b 1^i=b-a+1$.

This is actually a phenomenon that I've seen pop up really really often in math, physics, and computer science. You often have a sum of many terms, and a parameter that, for small values, makes the first term of the sum dominate all the others put together, and for large values, makes the last term dominate all the others put together, regardless of how many terms you have in the sum. But when the parameter equals exactly the critical value at which the transition between the two regimes occurs, all sort of strange quantities related to the number of terms in the sum appear in any approximation of it.

More simply, let $f(x,n)$ be given by the integral

The paradox disappears when you consider the antiderivatives having the common point $(1,0)$, i.e. the functions

It perfectly blends with the others. 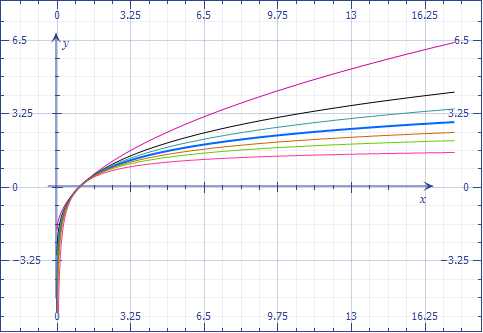 I shall demonstrate these three points in order from basic principles using basic properties of $\exp$ instead of 'ad-hoc' limit arguments. These properties are:

From (1) and (2) we can already obtain the answer. But why? Note that in the above derivation it is the derivative of $\ln$ that is actually causing the power of $x$ to decrease in the derivative of $x^r$. Interesting, isn't it! Now one might say, wait a minute, doesn't the power decrease because of the binomial theorem in the standard proof where $(x+h)^r = x^r + r x^{r-1} h + \cdots$? But look again; we have proven (2) for arbitrary real $r$, so if you wish to use the binomial theorem instead you would have to have proven it for arbitrary real powers! That is non-trivial, and at its core requires proving (2) or solving some related differential equation or proving that term-wise differentiation for power series works!

So I would say that (1), rather than being a special case that fills the 'discontinuity' at $r = -1$ in the anti-derivative formula for $x^r$ with respect to $x$, is actually the underlying reason for the general case via the derivative of $x^r$ for arbitrary real $r$. Since $\ln$ is the sort of 'base case' here, it cannot be derived from the general case, and there is sort of a logically inevitable split.

There are already great answers showing why $\int \frac{1}{x}=\ln(x) (+C)$. But it's fun to ask why integrating other powers of $x$ does not produce a logarithmic answer.

We can interpret this as meaning that the $\ln(x)$s are always "somewhere" in the integration of powers of $x$, but in almost all circumstances they are cancelled out by another term. For $x^{-1}$, uniquely, the cancelling term itself vanishes, and we are left with only the logarithm function.

Note that this argument was entirely circular, and thus doesn't "prove" anything. And we should probably worry slightly about dismissing that second term before it is evaluated. But I hope it was useful to see the problem from another direction.

the indefinite integral of $x^n$ has power $n+1$

So if you want an intuitive explanation, I would say the problem is that the pattern for the derivative rule introduces a constant factor of $0$ here that you cannot get rid of, i.e. "the indefinite integral of $cx^n$ has power $n+1$" is "true" for $n=-1$ only if $c=0$ to begin with, which covers only a degenerate case of $\int cx^{-1}$ and is not terribly helpful when evaluating $\int c'x^{-1}$ for $c'\neq 0$.

clearly is undefined if $n = -1$ so the rule is breaking down.

but since $x^{-1}$ is bounded and continuous if $x>0$ the integral should exist.

Lets tackle this from the other direction.

From the definition of derivative.

A different approach is provided by considering the effects of substitution on the differential $x^n dx$. Turns out we can blame, or perhaps credit, our old friend zero!

or in product form

Wait a minute, make that, we can almost interchange any $n$ for any $m$. The proposed substitution method will fail for the specific case $n=-1$ unless we also accept $m=-1$. Likewise $m=-1$ cannot be accessed from any value of $n$ other than $-1$. Note that this cutoff at $m=-1$ or $n=-1$ correlates with the multiplicative property of zero.

This means differentials having the form $x^n dx$ for different values of $n$ are interrelated by algebraic substitution and their integrals will be algebraic functions of each other -- except for $n=-1$ which is cut off from this interconvertibility. So, the integral of specifically $x^{-1} dx$ will have a different, algebraically independent form versus all other power function integrals. And it's all because of zero doing its own totalitarian thing with multiplication!

For me, the key observation has always been that $\int \frac{dx}{x}$ is "scale-free" in the following sense. Suppose that you perform a scaling operation on $x$ by defining $u=ax$ for some constant $a$. How does the integral change? You get: $$ \int \frac{dx}{x} = \int \frac{\frac{du}{a}}{\frac{u}{a}} = \int \frac{du}{u} $$ It doesn't change! This would not be true for any other power of $x$, since the numerator and denominator would not cancel out perfectly.

This is fundamentally the same observation as the highest-voted answer by @Anonymous above, and there are hints of it in the other answers as well. But I think that this way of explaining it is much more concise.

In physical terms, applying a scaling factor could represent measuring $x$ in feet rather than meters, for example. It's unusual that the result does not depend at all on the units that you use, and this is ultimately the reason why the logarithm has all of its interesting properties, such as $\log ab = \log a + \log b$.

(For those who are interested, the term "scale-free" is a buzzword in statistical physics to describe some similar behavior in physical systems near a phase transition. I have intentionally misused it here, because in physics you typically don't care about creating a constant factor when doing the scaling, so all power laws in physics are "scale-free," but here we are talking about strict equality.)

Not the answer you're looking for? Browse other questions tagged calculus real-analysis logarithms indefinite-integrals or ask your own question.