How to find the smallest enclosing quadrilateral for an irregular polygon

The context here is geo-location/geo-fencing. I need to compute the smallest enclosing quadrilaterals for a large sequence of irregular polygons (latitude/longitude value pairs) in order to approximately place a location in the right "polygon" with as little overhead as possible.

I should explain what I am trying to accomplish here. Take a look at the image below. I have used the rotated outline map of Austria by way of example - it has concavity, has one "end" a whole lot bigger than the other etc: the characteristics I want to deal with efficiently. This is only an example. The "real" polygons I need to deal with cover much smaller geographic areas.

Bounding this shape in a rectangle "pulls in" a great deal of "unrequired" area since the top of the shape of the polygon is so much smaller than the bottom of the shape. Using a bounding quadrilateral helps to reduce the unrequired area.

As I have noted, I only require this to make an approximate location placement. The fact that this technique can lead to spurious placements of a point in more than one adjoining quadrilateral bound polygons is not a concern. 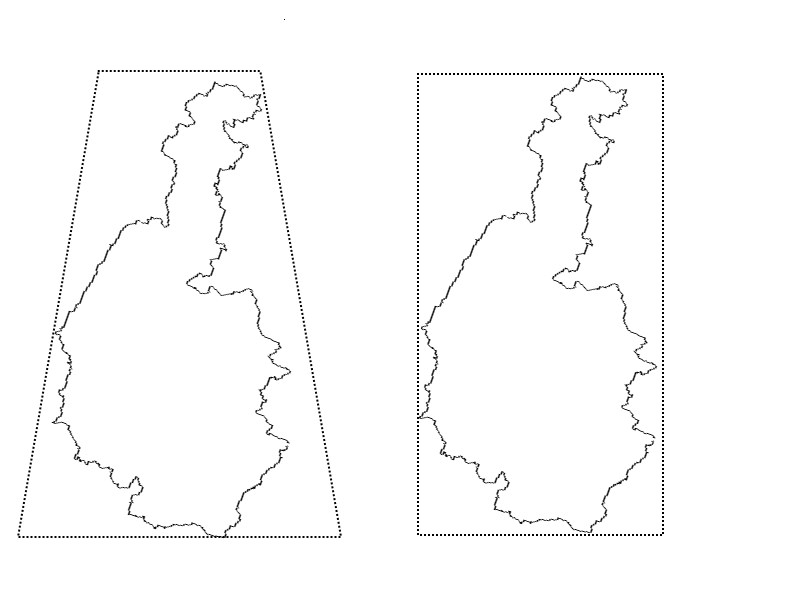 Are your polygons convex? Will the quadrilateral always be convex? If so then my intuition tells me that the minimum bounding quadrilateral will have sides that coincide with sides of the polygon. I don't know how to prove this but I'm pretty sure that at the very least making this assumption won't be a disaster. So to find a good solution you just enumerate all possible quadrilaterals that share all sides with polygon and then pick the one with the smallest area. This could be very ineffient though if the number of sides of the polygon is large.

Not the answer you're looking for? Browse other questions tagged computational-geometry or ask your own question.