How would a triangle for sin 90 degree look

I am studying trigonometry in my school and learned that in a triangle the side opposite to angle theta should be taken as perpendicular side - hypotenuse remains the same and the third remaining side is the base.

The remaining other can be created using the above two.

One other way to find angles -

And in this case Opposite Side is Hypotenuse itself.

One could think as follows: Since the side opposite to the angle B is the hypotenuse, then: $$ sinB = \frac{hypotenuse}{hypotenuse} = 1$$

However, one must always look carefully and rigorously to definitions. The sine of an angle is defined as the division of the opposite side to the angle by the hypotenuse. The hypotenuse can't be one of the sides. Having a look at the trigonometric circle might help: 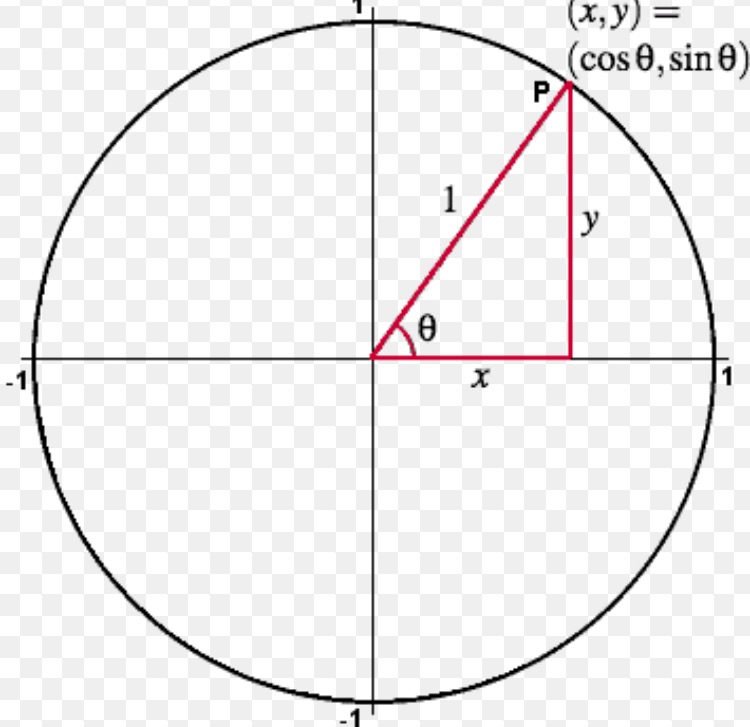 The sine is defined here always as the value of $y$ divided by 1 (hypotenuse) When the angle is 90°, then $y=1$. I don't want to sound rude, but there is not a lot of sense in "choosing the sides" for calculating the sine of 90°. Hope i've helped.

The short answer is that you can't construct a right angle triangle to visualise $\sin 90^{\circ}$.

The "opposite" (or "perpendicular" as per your nomenclature) side has to be distinct from the hypotenuse, it cannot be the same side. But in a plane figure with two right angles opposite one another, you will never have an apex as the parallel sides won't ever meet (i.e. you can't construct such a triangle).

You can get arbitrarily close by having one true right angle with the other angle approaching very close to a right angle (with the third angle getting progressively smaller). This will result in a very "tall" and "narrow" right triangle if you orient it a certain way. From this you can tell that the side opposite the right angle will become closer and closer to the length of the hypotenuse, with the sine of that angle approaching $1$ from below. In other words, you can construct plane right triangles allowing you to visualise $ \sin x \to 1$ as $x \to 90^{\circ}$, but you can't actually draw the limiting case.

Opposite Side means opposite to the angle for which you are calculating the sine and cosine. An angle in a right-angled triangle will be formed from two sides of the triangle: Hypotenuse and Adjacent Side. The third side will be the opposite side of this angle.

If we simply change the angle for which the sine and cosine to be calculated, the adjacent and opposite sides will change, but the hypotenuse will remain the same since the right angle did not change.

Look at the following picture:

While the idea of measuring the sine of a right angle using a degenerate triangle (hypotenuse coincident with the opposite leg, and a base of zero length) may be intuitive to some, not everyone finds it satisfactory, as you can see from the other answers.

And what about the sine and cosine of angles between $90$ and $180$ degrees? We need them in order to apply the law of sines and law of cosines to the obtuse vertex in an obtuse triangle.

Indeed, as you go on in mathematics you may find it desirable to find sines and cosines of angles greater than $180$ degrees, and even "angles" greater than $360$ degrees.

Mathematicians solve this problem in the definitions of trigonometric functions by extending the definitions of the sine and cosine functions so that they take care of input values of any size. The extensions agree with the hypotenuse-opposite-adjacent definitions for angles that are greater than zero but less than a right angle, and they preserve useful properties such as angle-sum formulas and angle-difference formulas for input values outside that range. Several of these extended definitions are listed in the answers to an earlier question, How many ways are there to define sine and cosine?

My favorite extended definition for use at a level of mathematics where you are just starting to go beyond the elementary right-triangle definition is the unit-circle definition. We observe that if you place a right triangle with unit-length hypotenuse on the Cartesian plane so that one leg is on the positive $x$-axis and one end of the hypotenuse is at the origin of coordinates, $(0,0),$ the $(x,y)$ coordinates of the other end of the hypotenuse are the cosine and sine (respectively) of the angle at the origin. If we then take a sequence of triangles like this with increasing angles at the origin, the other end of the hypotenuse traces out points along the circle of unit radius centered at the origin. The idea of the unit-circle definition is that you use the $(x,y)$ coordinates of these points as the definition of cosine and sine, and to find cosine and sine of $90$ degrees or larger angles, you just keep going around the unit circle. Once you accept this as a definition, there is nothing ambiguous or even special about the sine of $90$ degrees, except perhaps that it is unusually easy to find its value.

63
How does a calculator calculate the sine, cosine, tangent using just a number?
0
Finding a Side of a Triangle Using Basic Trig
3
Is sine of angles greater than 90 degrees a convention?
0
Adjacent versus Opposite Angles in Right Triangles (Trigonometry)
4
Sine of an obtuse angle
0
Intuitive understanding of trigonometric functions of angles greater than a right angle
2
Finding the ratio of cosines of a triangle given the ratio of sines
0
Prove that the ratio between the sines is equal to that of the sides.
2
Necessity to prove certain obvious and trivial results in trigonometry?