Is it possible to have a spherical object with only hexagonal faces?

If so, what would be the most efficient algorithm for generating spheres with different number of hexagonal faces at whatever interval required to make them fit uniformly or how might you calculate how many hexagonal faces are required for each subdivision?

No, not even if we permit non-regular hexagonal faces. (We do, however, preclude hexagons that are not strictly convex—where interior angles can be $180$ degrees or more—since those permit degenerate tilings of the sort David K mentions in the comments.) The reason is more graph-theoretical than geometrical.

Consider the faces meeting at a vertex. There must be at least three of them, since it is not possible in a solid for only two faces to meet at a vertex.* Thus, if we add up the six vertices for each hexagonal face, we will count each vertex at least three times. That is to say,

On the other hand, if we add up the six edges for each hexagonal face, we will count each edge exactly twice, so that

Substituting these into Euler's formula, we obtain

But if $F+V-E \leq 0$, then it is impossible that $F+V-E = 2$, so no solid can be composed solely of hexagonal faces, even if we permit non-regular hexagons.

*ETA (2022-05-17): This is a concession to geometry; the argument isn't strictly graph-theoretical. If you permit situations where only two faces meet at a vertex, then it is possible to create a polyhedron with only hexagons. For instance, start with a cube, and describe a circuit around the faces. (One such circuit goes along the faces of an ordinary die in numerical order.) Then on the edge adjoining two faces in this circuit, add an additional vertex in the middle. Each face will have two new vertices, converting each square into a "hexagon" of sorts. But I think most people would agree this isn't a very interesting positive response to the original question.

If we now restrict ourselves to regular faces, we can show an interesting fact: Any solid with faces made up of nothing other than regular hexagons and pentagons must have exactly $12$ pentagons on it (the limiting case being the hexagon-free dodecahedron).

Again, we begin with Euler's formula:

Similarly, if we count up the five edges of each pentagon and the six edges of each hexagon, then we have counted each edge twice, so

Plugging these expressions back into Euler's formula, we obtain

However, these pentagonal faces $G$ through $L$ cannot terminate in a single vertex—they would have to be squares to do that. Hence, they must terminate in a second hexagon. Thus, a polyhedron of the type envisioned cannot exist.

Likely the above approach could be made more rigorous, or perhaps there is a more clever demonstration.

If a compromise is acceptable, the $2p, 4p, 8p, ... $ subdivisions of each side of an icosahedron in Buckminster Fuller domes leave behind 12 pentagons at each of its 12 vertices.

Else, possible by means of a stereographic projection of a flat regular hexagonal net (a node of which touches south pole and other nodes/junctions connect to north pole), the curvilinear hexagon boundary cells shrink to zero towards north pole according to standard stereographic scaling. They can be seen on POV Ray image provided by user PM 2Ring below. A part of spiral has been traced connecting opposite vertices of some hexagons. 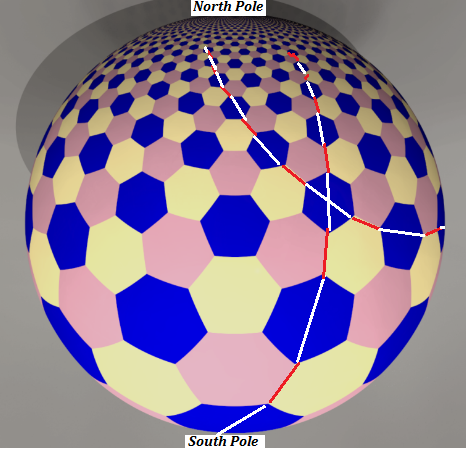 It is a collection of log spirals centered at south pole that isogonally ( i.e., conformally) project to rhumb-lines (loxodromes constant inclination to meridians at $\pm \pi/6$) with corresponding latitude circles drawn. I could make an image later if you wish to see. Since these loxodromes are not overtly seen on the above image, some segments are indicated across some hexagon diameters.

You can do it if you allow your sphere to have a hole through it, i.e. be a torus. See image here. Then the Euler characteristic, as described in Brian Tung's excellent answer is 0, not 2.

You might also be able to do it for non-convex polygons; convexity is a requirement of the Euler characteristic. See, e.g., the octahemioctahedron. I couldn't find one with just hexagons though.

2
Is it possible to imitate a sphere with 1000 congruent polygons?
1
creating all possible connected graphs with $n$ edges
9
Determine all convex polyhedra with $6$ faces
10
What is the most efficient shape for tiling curved spaces?
5
What 'uniform' shapes can be used to build an approximated spherical object?
1
Smallest polyhedron with an odd number of all n-gon faces
1
the MST over spanning trees that must contain a specific edge (proof of correctness)
4
How to construct a chamfered dodecahedron with equilateral or coplanar faces?