How to choose the smallest number not chosen?

So there are $n$ people, each choosing some non-zero counting number. You don't know what any of them choose. To win, you must choose the smallest number; but if you choose the same number as somebody else, you are disqualified. How would you decide what number $k$ is best to choose? I feel like $k\le n$, but apart from that I have no idea where to start. Any ideas?

EDIT: So to avoid a trivial paradox and to somewhat model real human behavior, we want the $n$ people to choose numbers reasonably but not necessarily perfectly. For instance, nobody else is gonna choose $k > n$, as that would be silly. Since choosing 1 being unreasonable would lead to paradox, we'll also say 1 could be chosen, but won't necessarily be picked.

Contrary to intuition, the Nash equilibrium for this game (assuming $n\geq 2$) must have positive probability of choosing any positive integer. Assume not, so there is some integer $m$ such that the Nash equilibrium picks $m$ with probability $p_m>0$ but never picks $m+1$. Suppose everyone else is playing that strategy, and consider what happens if you play the modified strategy which instead picks $m+1$ with probability $p_m$ and never picks $m$. This performs exactly the same if you pick some number other than $m+1$. If you pick $m+1$ and would have won had you picked $m$ then you will still win, since no-one else has picked $m+1$ (because they can't) or $m$ (by assumption that you would have won by picking $m$). You also win in the event that you pick $m+1$ and everyone else picks $m$, which has positive probability. So the original strategy wasn't a Nash equilibrium, because this one beats it.

Given that there are $n$ players, let's assume that each player must choose a number $k \in \{z \in \mathbb{Z} | 1 \le z \le n\}$. Note that the order of players picking a number does not affect the outcome.

When $\textbf{n = 2}$ equilibrium is achieved when both players choose the smallest number i.e. $1$.

Let's consider what happens if we choose

This approach can be generalised for more players.

But generalizing to any $n$ is proving more difficult than expected.

Edit 18 Nov 2021
With more than three players, I get a sequence of simultaneous polynomial equations. I could not solve them. Instead, I picked a random starting set of probabilities, and did a random walk to minimize the variance of the probabilities of winning. I got the following graph for Nash equilibrium probabilities of selecting each number, depending on the number of players in the game. 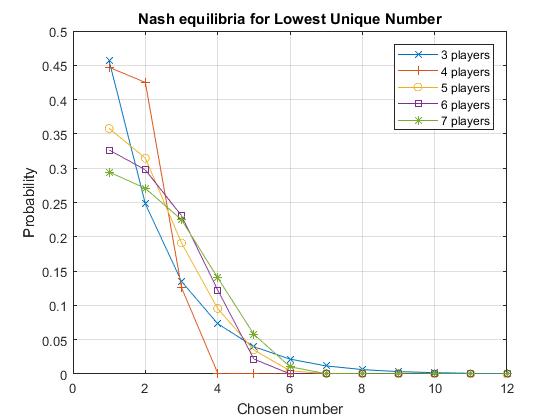 For $N$ players, either 0, 2 or more rivals pick 1, then you need to be best of what's left. There is a recursion on the winning probability $W=f(p,N)$

If everyone picks a value between 1 and $n/\ln(n)$, each value will be picked $\ln(n)$ times on average.

For a given value, the number of times it is picked follows a Poisson distribution, with $\lambda = \ln(n)$. The chance it is picked once is $\lambda e^{-\lambda}=\ln(n)/n$.

On average, one value will be unique.

If people pick numbers bigger than $n/\ln(n)$, there will be several unique numbers. Since only the lowest of these wins, they would be better off with smaller numbers - so this is not fruitful. If people spread out over twice the interval, there will likely be $\sqrt{n}$ unique values.

If people only pick values much less than $n/\ln(n)$, then each value is picked several times. Everyone is eliminated, and a winning strategy is to avoid the crush by picking a large value. Again, it is not fruitful to concentrate on small values. If people restrict to half the interval, there is one chance in $n$ of any unique values.

I believe the following is a proof that, in the simplified case of exactly 3 players, there doesn't exist a computable optimal strategy.

2
Odds of a number being the smallest number not picked?

9
Number Game: 31 - Winning Strategy?
35
Three against the devil: a combinatorial game
3
How does one explain basic probability theory to a layman?
1
Why is the "rational" solution to the Traveler's Dilemma 2?
0
What is the optimal solution to this common resource pool problem?
10
Dice puzzle: pips must sum to 21
0
Game theory - Cooperative n-player game with only one winner.
5
What is the optimal strategy of guessing a number where closest without going over wins?
5
Best strategy to optimize probability of winning in card drawing game with opponent