The classic problem of constructing a perfect squared square, i.e. tiling a square with a finite number of squares of pairwise distinct sidelengths (which must be rational multiples of the tiled square's, so we need only look for integral tilings) has solutions (one is shown below). However, it has been proved impossible to tile an equilateral triangle with equilateral triangles of distinct sizes (elegant proof here). It is also impossible to do it for other (more-sided) regular polygons since the angle between a corner piece and the side of the tiled polygon will be acute.

In three dimensions, one can prove very elegantly that it is impossible to divide a cube into a finite number of cubes of distinct sizes. A natural generalization is to ask whether it is possible to divide a regular tetrahedron into tetrahedra of distinct sizes (I assume the other Platonic solids will not work)? This problem appears more complicated, and I don't know if either impossibility proof (for cube or equilateral triangle) will generalize to tetrahedra. (This question appears to be asking something somewhat different, related to a specific type of division).

Thus I have the following questions: 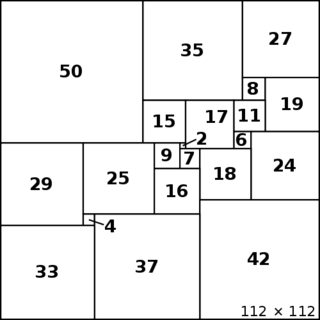 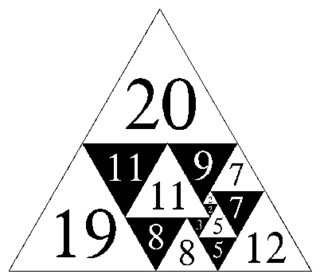 Here is a bit more rigorous argument. Clearly such a decomposition will have an edge $e$ of some smaller tetrahedron$~t$ across a face of the original tetrahedron ("across" meaning lying in the face but not along an edge of it). The plane perpendicular to$~e$ and cutting it at the middle has an angle of$~\pi$ for the interior of the original tetrahedron (the remaining angle$~\pi$ being the exterior). Of this flat angle, $t$ occupies $\arccos(\frac13)$, but $\pi-\arccos(\frac13)$ is not an integer multiple of $\arccos(\frac13)$, and so we cannot fill this remaining angle completely with tetrahedra, so we will fail to cover some points in the neighbourhood of the edge$~e$.

We see that it would actually be necessary to have an angle of the form $\frac\pi n$ rather than the more liberal $\frac{2\pi}n$ to succeed. If you try to arrange regular tetrahedra around a common edge, you will see that you can manage $5$ but that a small angle is left, way to small to fit in a sixth regular tetrahedron.

Here is another approach, which shows the much stronger statement that a tetrahedron cannot be cut into polyhedral pieces that are then reassembled into smaller regular tetrahedra. We'll do this by proving that any collection of equal-volume smaller tetrahedra don't have the same Dehn invariant as the large one.

But since all $\ell_i$ are less than $1$ by assumption and their volumes add to the volume of the original tetrahedron,

so the Dehn invariant of the small tetrahedra will exceed that of the large one and they will have a nonzero difference.

(This doesn't rely on the tetrahedron in any particular way except that the Dehn invariant is especially simple - the general theorem here is that a polyhedron is dissection-congruent into a collection of scaled-down copies if and only if it is a space-filling polyhedron, i.e. has Dehn invariant $0$.)

Not the answer you're looking for? Browse other questions tagged combinatorics geometry recreational-mathematics discrete-geometry tiling or ask your own question.

8
Equidecomposability of a Cube into 6 Trirectangular Tetrahedra
6
Dissecting an equilateral triangle into equilateral triangles of pairwise different sizes
5
Division of regular tetrahedron
1
Rectangling the rectangle
4
Triangling a triangle
14
A regular tetrahedron can be dissected into $1,2,3,4,6,8,12,$ or $24$ congruent pieces. Is this it?
4
Cutting a polygon into 2 or 3 smaller, rationally-scaled copies of itself?