Prove or disprove my conjecture about triangles.

Prove or disprove: For a set of at least 3 points not all collinear, we can always construct a triangle that contains the points, with the added condition that each of the triangle's edges has a point at its center.

Example: See the figure below. 7 points are scattered about at random, and the black triangle contains all of them. (Note that I consider the red point in the bottom left contained despite being intersected by the edge of the triangle.) Furthermore, the triangle's sides each have a point from the set at their center. I have colored these center points orange for convenient viewing, but there is nothing special about them: I might have selected another three center points when building a triangle to contain this set. 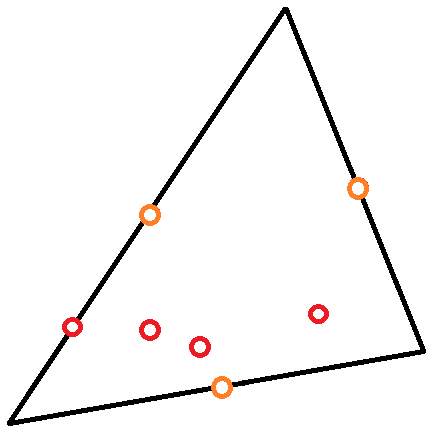 Your conjecture is true, and for a surprisingly (to me) elementary reason. I strongly suggest you draw my solution for yourself - it isn't deep.

A finite set of points $S$ will determine finitely many triangles; take the largest of these in area, $T$. I claim that all points will fall inside the triangle $M(T)$ which has $T$ as its medial triangle (which will clearly satisfy our requirements on each side of the triangle having a midpoint belonging to $S$). Now suppose that some point $s\in S$ fell outside $M(T)$; let $L$ be the side of $M(T)$ that $s$ lies above. (By this I mean that if we extend the sides of $M(T)$ to infinity, there will be three sections of the plane, determined by these lines, which touch the sides of the triangle; if $s$ is in the section that touches $L$, we can visualize it as "lying above $L$.")

Now, take the side $K$ in the original triangle $T$ which is parallel to $L$ in $M(T)$. Because $s$ lies above $L$, it lies above the vertex $v$ in $T$ that falls along $L$, which means - since $K$ and $L$ are parallel - that the altitude of $s$ from $K$ is higher than that of $v$ from $K$. But then the triangle having $s$ as a vertex instead of $v$ would have strictly larger area (take $K$ as the triangle's base to see this). This would contradict our hypothesis that $T$ was the largest triangle we could make from points in $S$!

Not the answer you're looking for? Browse other questions tagged geometry proof-writing or ask your own question.

4
Prove that if Triangles ABC = DEF in a metric geometry, then line AB contains exactly two of the points D, E, and F.
12
How can the centers of these 5 related circles be specified as a formula?
0
How do I scale a triangle given its cartesian cooordinates?
0
Triangulation to maximize the number of triangles, including those with points inside
2
How do you calculate the weighting of a point inside of an equilateral triangle compared to its vertices?
0
Calculating the bounding box for a projected equilateral triangle
3
Find all the triangles in a dissection of a decagon