I am trying to understand the following proof intuitively which I am providing from Joseph R. Shoenfield’s Mathematical Logic, page 15,verbatim. If you wish to consult the book there is an link here. 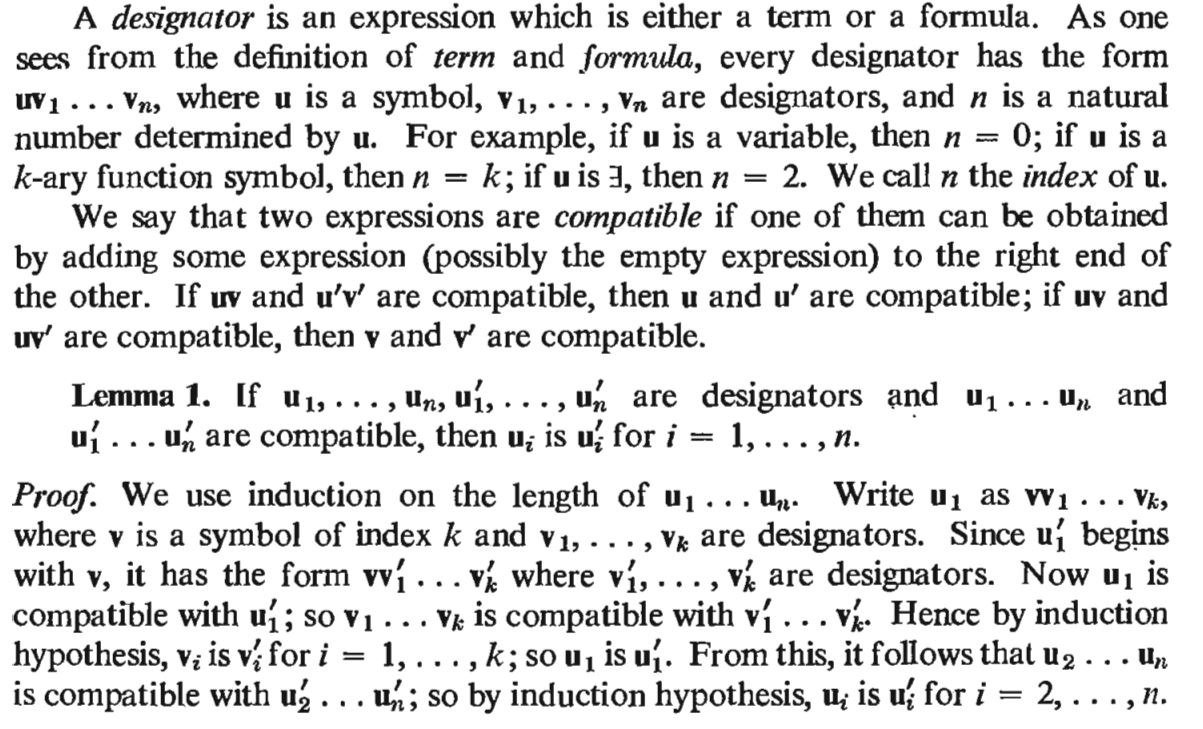 There are two criteria in the definition of compatibility:

Here is what I was thinking so far:

The proof in the book seems to assume that the desginators $\mathbf {v_1,...,v_k}$ are not be further dependent on other terms. Or am I completely misunderstanding this??

Thanks in advance!! I really appreciate this site.

Let's first of all set some context. Shoenfield is preoccupied with establishing unique parsing (or readability, as aptly pointed out by @bof) of first-order languages. He uses Polish (prefix) notation for both terms and formulae, which allows him to give a unified treatment. (Unlike, for instance, Enderton, who is another author preoccupied with unique parsing.)

So, designator is the term that may refer indifferently to a term or a formula. If we have a sequence of designators, we want to show that there is no ambiguity in their parsing, even though there is no syntactical demarcation of where one ends and the next begins.

Now Lemma 1 shows that two (syntactically correct) sequences of designators that result in the same sequence of symbols can only be obtained by concatenating the same designators in the same order.

So, we apply the inductive hypothesis to $v_1\cdots v_k$ and $v_1'\cdots v_k'$ to prove that $u_1$ is parsed the same as $u_1'$. This means, thanks to the second property of compatibility, that $u_2\cdots u_n$ is compatible to $u_2'\cdots u_n'$. Both are shorter than the two original sequences, which allows us to again invoke the inductive hypothesis to argue that they have a unique parsing and thus finish the proof.

Not the answer you're looking for? Browse other questions tagged logic induction proof-explanation first-order-logic formal-languages or ask your own question.

0
Lemma concerning compatibility of words (formed by a term algebra)
4
understanding a proof which uses induction on the length of a formula
1
Induction on formulas in First Order Languages
3
Satisfiability in first order languages
0
Mathematical Logic (Shoenfield) : Lemma 1
2
How to prove $x=5$ using the Peano Axioms?
0
Special neighborhoods for distinct points in a first countable and compact space?