How big is the equilateral triangle inscribed in a triangle?

I would expect an answer as a ratio of polynomials in sines and cosines of the angles of $\triangle ABC$. I got such an expression via a clunky unsymmetrical method, but it but it was so messy that I gave up trying to simplify it. However, a more intelligent method might well yield a formula of reasonable length. 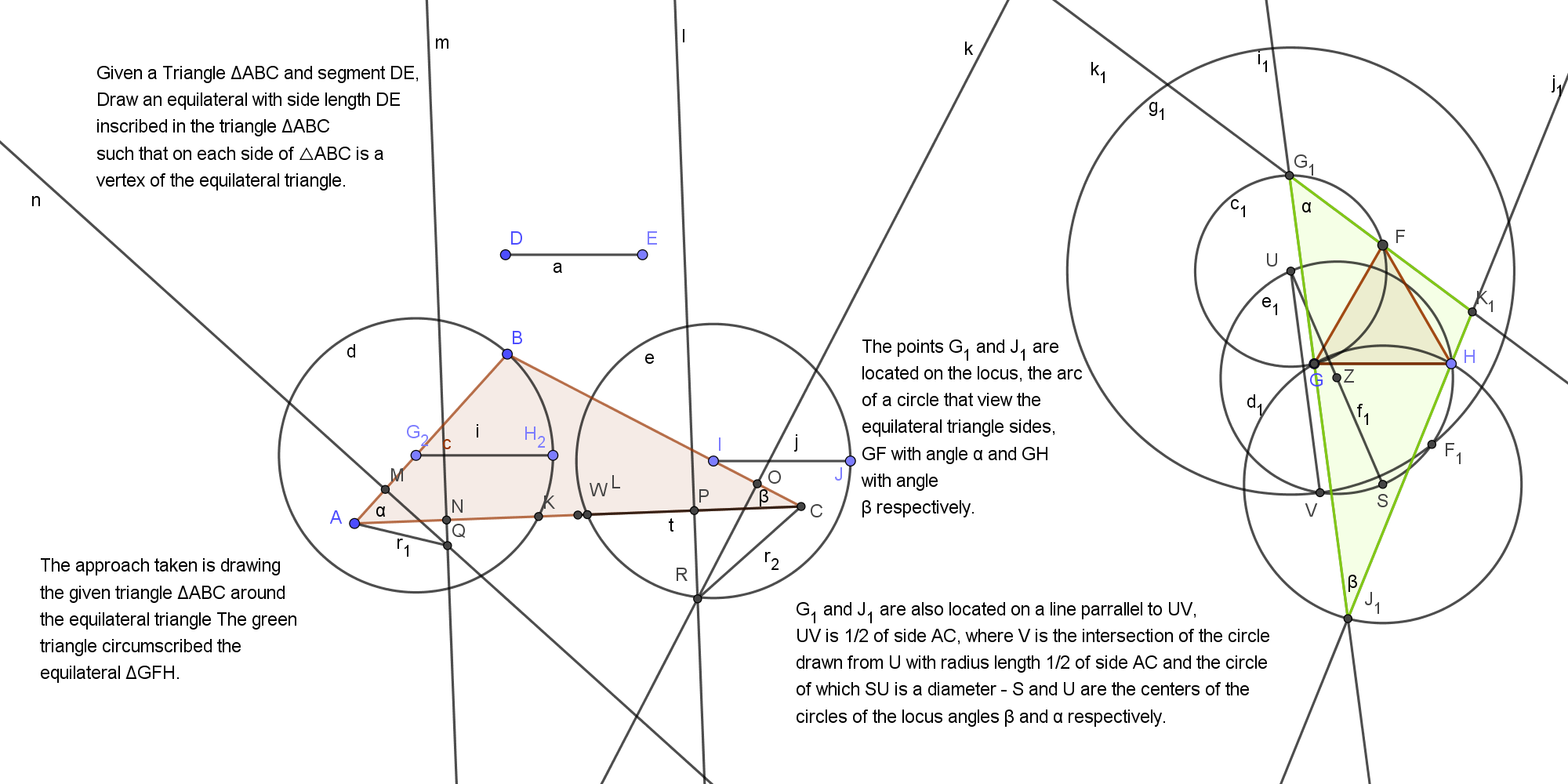 When you have (the drawing on the right) the two circles with centers $U$ (radius $r_1$) and $S$ (radius $r_2$), you select the side of the equilateral triangle $GH$, in the larger circle (center $S$ in the drawing), you stretch it to intersect the smaller circle (not shown) and then you draw the line through this intersection and the third vertex of the equilateral triangle intersecting the other circle.

Let me know if you have a question. 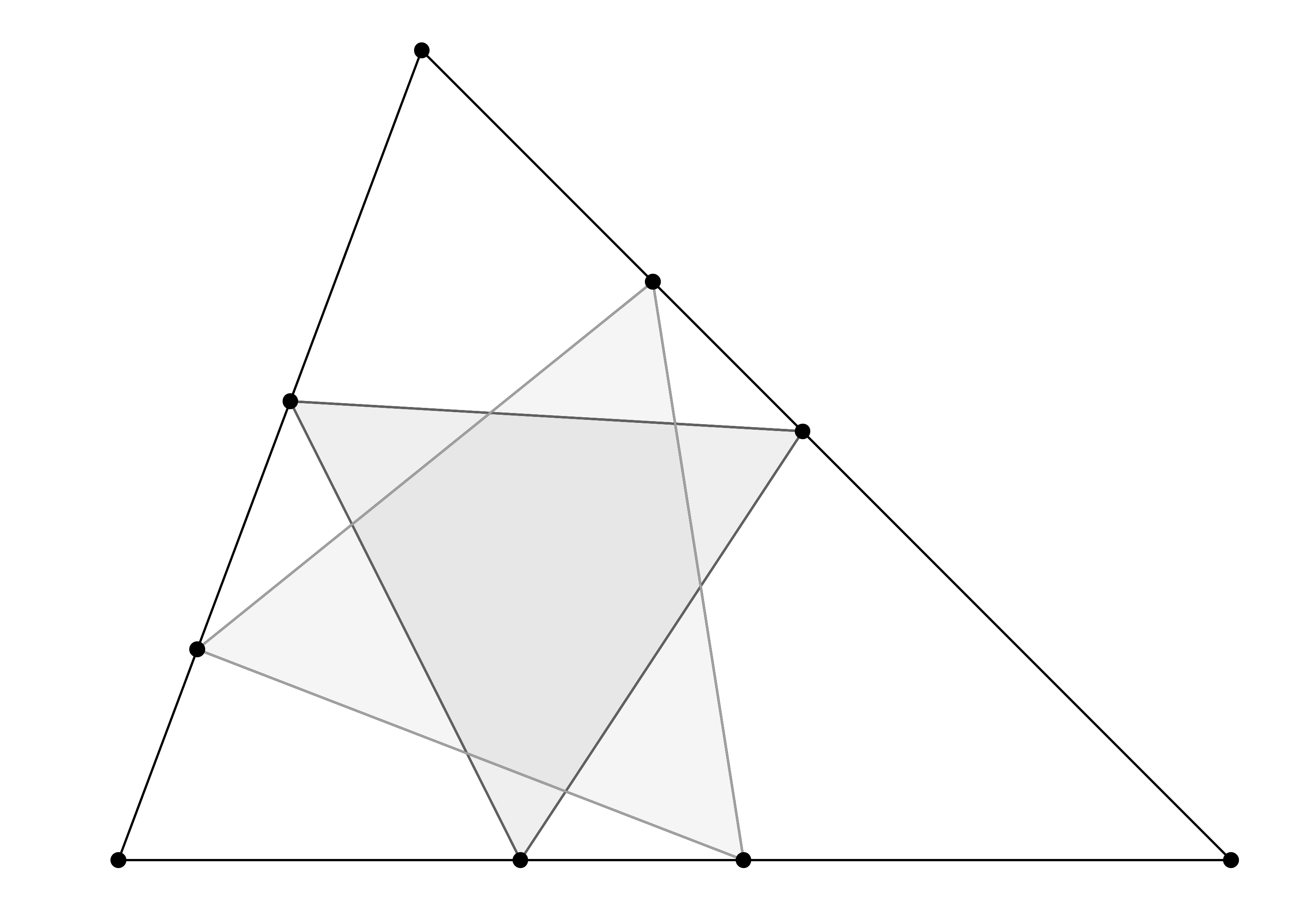 If you mean what is the maximum ratio $\frac{[ABC]}{[DEF]}$, the answer is given by a rescaled Napoleon triangle. We may notice that such ratio is also the ratio between the areas of the largest circumscribed equilateral triangle and the original triangle. On the ther hand, it is quite simple to describe the set of the circumscribed equilateral triangles: let we consider the Napoleon/Torricelli/Fermat configuration: 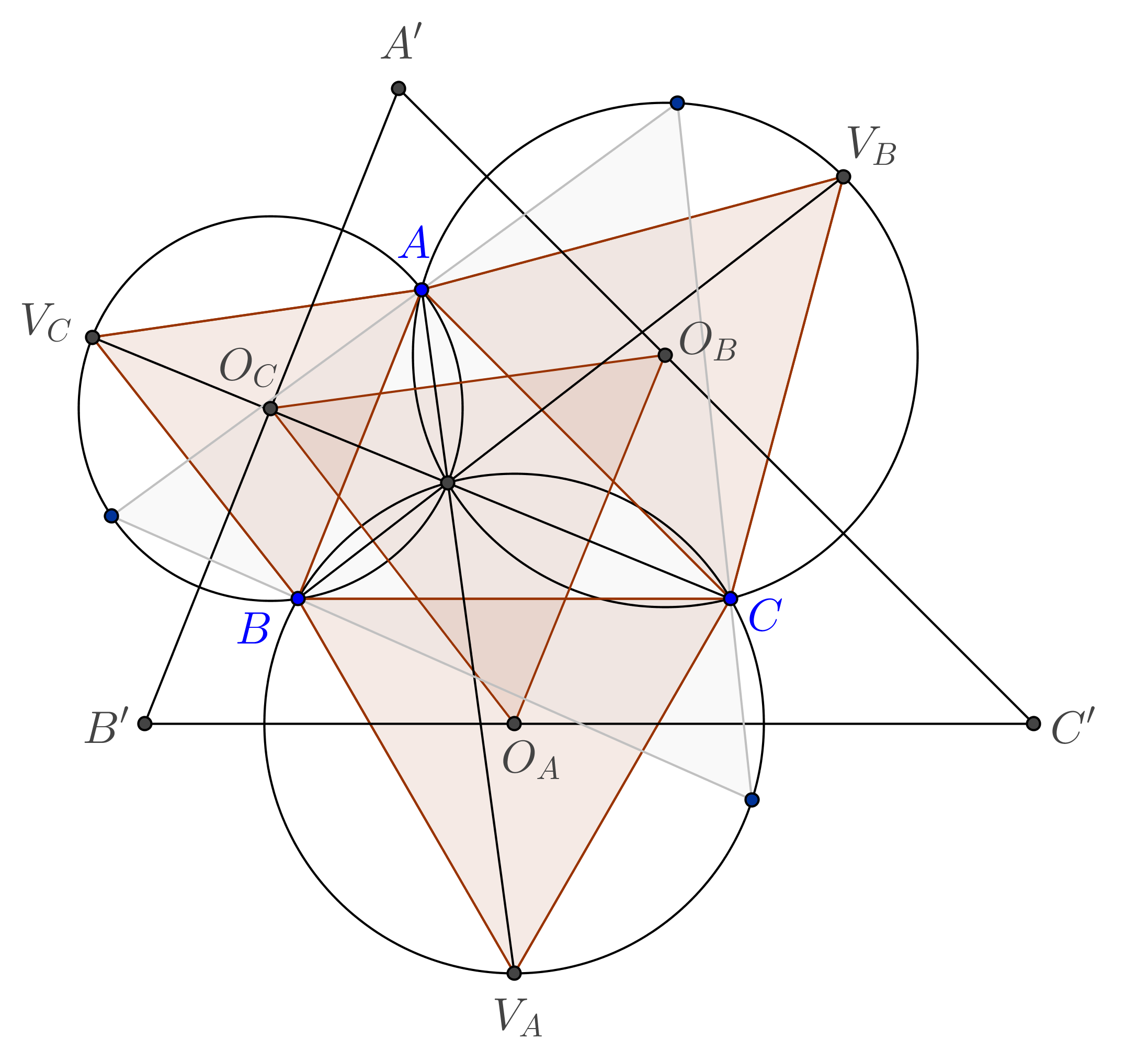 We have $O_B O_C\perp AV_A$ and so on. If we take a point $P$ on $\Gamma_A$ (the circumcircle of $BCV_A$), draw a line through $B$ till meeting $\Gamma_C$ at a new point $Q$, then draw a line through $A$ till meeting $\Gamma_B$ at a third point, the (grey) triangle defined this way is equilateral. It follows that we simply need the greatest $PQ$ segment among the segments built through the previous procedure. This segment has to be perpendicular to the radical axis of $\Gamma_A$ and $\Gamma_C$, so the Napoleon triangle of $ABC$ is the smallest inscribed equilateral triangle in $A'B'C'$. By rescaling, we get the solution. It is interesting to point out that the side length of $O_A O_B O_C$ is $\frac{1}{\sqrt{3}}AV_A$, and $AV_A=BV_B=CV_C$ is the length of the Steiner net of $ABC$, i.e. $FA+FB+FC$, with $F\in\Gamma_A\cap\Gamma_B\cap\Gamma_C$ being the Fermat point of $ABC$.

This is intended as a different view, but doesn't constitute a complete answer.

We are going to work on the following figure, which has a classical aspect (first part of Miquel's theorem, see (https://en.wikipedia.org/wiki/Miquel%27s_theorem)) 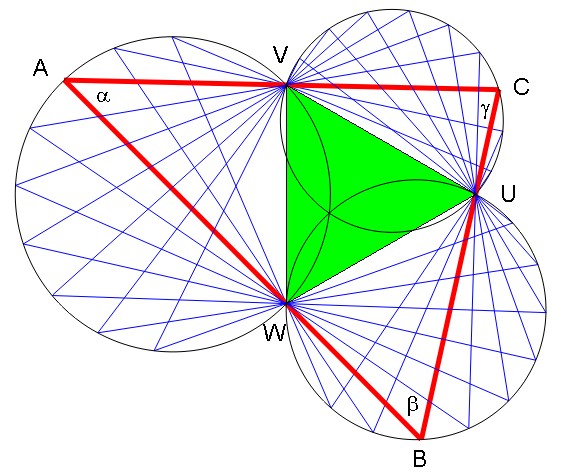 This makes sense as the issue is size and rotation invariant.

Being given these angles $\alpha, \beta, \gamma$, where can $A,B,C$ be situated?

Evidently, $A,B,C$ are restricted to be on circles (or more precisely their external arcs) from which one can see resp. line segments $VW$,$WU$ and $UV$ under angles $\alpha$, $\beta$ and $\gamma$ resp..

Taking an arbitrary point $A$ on the $\alpha$ circle; line AW intersects circle $\beta$ in $B$; then, line $BU$ intersects circle $\gamma$ in $C$; at last, points $C,V,A$ are aligned, as can be established by angle chasing in triangles $AWV$, $BUW$ and $CVU$. This is our manner to prove the existence of an infinite number of ways to inscribe an equilateral triangle in a given triangle.

Remark: We have also a global view of the areas ratio $R=[UVW]/[ABC]$ whose maximum is looked for (this ratio has not been modified by the transformation); it is equivalent to look for the

As the figure of this text is very similar to the figure given by @Jack d'Aurizio (though obtained in a different spirit), I do not complete (at least for the moment) my proof because it would paraphrase his proof. I am indebted to Jack d'Aurizio because a first draft of this text was on bad tracks : I hadn't perceived that there is a - continuous - infinity of inscribed equilateral triangles in a given triangle.)

28
Langley's Adventitious Angles
3
Why are there two possible triangles when given SAS?
1
Minimizing the area of the triangles containing a square of side $1$
0
Proof of an inequality in a triangle
1
Finding center and radius of circumscribed triangle
3
Is there anything special about intersection points of vesica pisces circles on a triangle?
2
Four circles tangent to each other and an equilateral triangle
7
Finding angles of $\triangle ABC$: $CA=CB$, $BD$ is angle bisector and $BD+DC=AB$.
0
Given three non-colinear points, calculate the angle between every edge
2
Inequality with sides and angles in a triangle