Why is the second derivative of this function a straight line?

This might be an unusual question but I was wondering why the 2nd derivative of this function is a straight line? I kind of have the feeling this is not that easy to answer. But it kind of struck me that it is exactly linear. 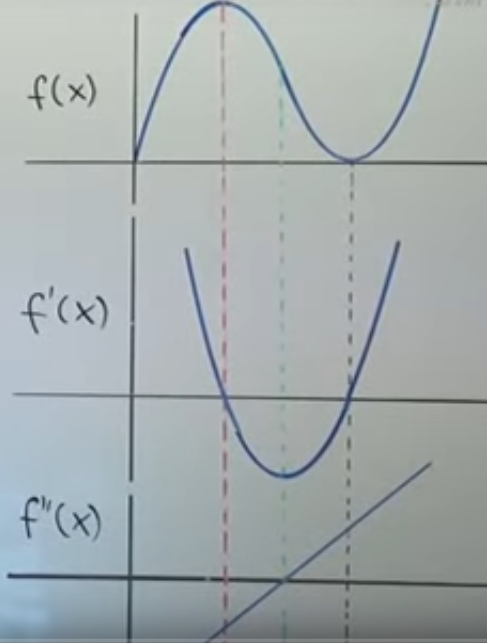 I mean, yes mathematically you can say that it just is as it is, but is there also an intuitive answer to it? Thank you for answering!

Suppose the second derivative of a function is a straight line:

So the only functions that have their second derivatives as straight lines are polynomials degree $3$ or lower.

Now, for some insight, let's just worry about the first derivative of $x^2$, which is obviously $2x$, but I wish to make it more intuitive:

Similarly, if we apply a finite difference on $x^3$ 2 times, which is analogous to the second derivative, we get

Indeed, you should be able to prove by induction that the $n$th derivative of a polynomial degree $n+1$ is linear.

And as a last comment, usually, when we have $h\to0$, all the left-over constants and such go to $0$.

I understand this is math.stackexchange, so the answers that have already been put up are certainly sound. However, you said you were looking for something a little more intuitive.

The diagram you posted has dotted lines drawn from the top curve at inflection points, where the slope changes from positive to negative. Notice how they're drawn downwards to the middle curve (the parabola) exactly where it crosses the x-axis.

The second derivative is not guaranteed to be a straight line for any arbitrary function $f(x)$; it just describes the "slope of the slope" of that function.

I will make an attempt to respond to this part:

is there also an intuitive answer to it?

Recall that the derivative of a function [is a function that] takes an $x$-value as its input, considers the tangent line drawn at that $x$-value, and gives the slope of that tangent line as its output.

I happen to think that considering a quadratic function written in standard form, $ax^2 + bx + c$, and recalling that its vertex occurs when $x = -b/2a$, is enough to guess (using one's intuition) not only that the derivative would correspond to a linear function, but that, in particular, the derivative is $2ax + b$. I wrote up this idea and put it as the second example in the following article, published in a journal of mathematics education, which you may (or may not) find of interest:

Let's talk only about intuition.

Your $f(x)$ plot shows a function with one local maximum and one local minimum, and you can expect that at such points $f'(x)=0$. And it turns out that your $f'(x)$ plot has one (absolute) minimum, so $f(x)$ should have an inflection point. It makes sense: your function reaches a local maximum and starts decreasing and then reaches a local minimum and starts increasing; at some point between maximum and minimum the "speed" at which the function decreases has to slow down: that point is the inflection point, where $f''(x)=0$.

Finally, the second derivative being a straight line requires to see all plots together:

Others have mentioned what the intuitive meaning of a derivative is: How steep the curve is at that point, i.e. how steep a line would be that touches the curve only at that point: a tangent.

So we have established that the derivative line is qualitatively correct, but it could still be a curved line. Why is it straight? This picture may explain it: 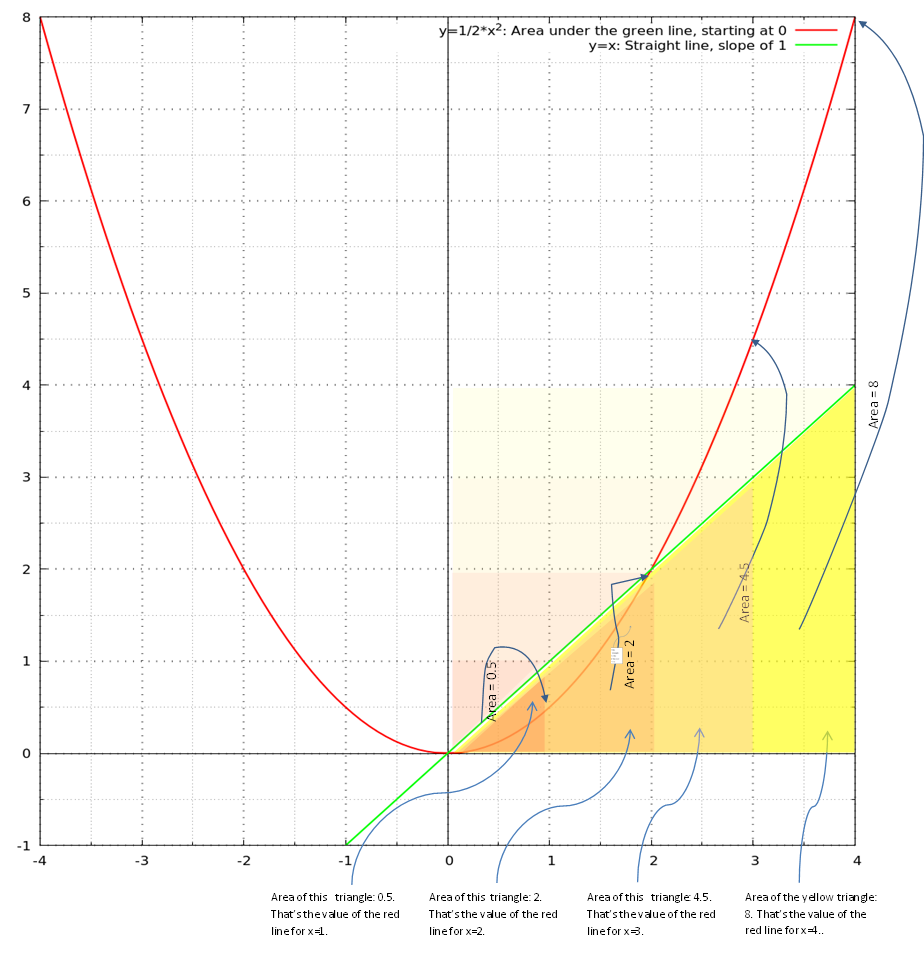 We see a parabola in red and its derivative in green. Because the reversal of deriving is integrating, the parabola gives us the value for the area under the green curve for each x. The areas are triangles which I highlighted in shades of yellow and orange. Remember that the area of a triangle is half the area of a corresponding rectangle, marked in a very light shade above the green line. Therefore, the triangles' area — which is the area under the green line — is growing with the square of x! A function whose value grows with the square of its argument is a parabola. I have marked the triangles' areas and the corresponding value of the parabola with arrows. It's actually easy to just count the areas with the aid of the grid.

If we have the speed of a vehicle at each point after it started, we can compute the distance covered: It is the area under the speed graph, in our diagram the triangles. The red graph shows that distance. It becomes steeper and steeper, because the vehicle accelerates. It is a parabola because the triangles' area grows quadratically.

A nice example with more graphics for the speed/distance relationship can be found here.

Differentiation is an invertible operation.

Given an arbitrary function $f(x)$ (with some restrictions that are irrelevant here) you can find a function $g(x)$ such that the derivative of $g(x)$ is $f(x)$.

You can find a function such that its second derivative has any shape.

In the case at hand, if

In fact taking the antiderivative of any polynomial is straightforward.

For other functions $f$, quite often you won't be able to find an analytical expression that works, but this doesn't mean that the functions $g$ and $h$ do not exist. In this case, it is not possible to "write it down", but you can plot it anyway.

It turns out that the next question, "is there a function which is the same as its own derivative" is an extremely important one, which has innumerable applications in the study of physical systems.

As you can check (if you learnt the properties of the exponential), $f(x)=e^x$ is such that

What derivative does is it shows you relative change. Let me explain:

Now if you look at the chart of the g(x) function, You'll see that it changes a lot on the left side, then almost no change near 0 and then it starts changing more and more.

Now on the left side, the value goes down. And the derivative is negative. the bigger the change, the lower the value of g'(x).

Near zero, g'(x) reaches zero, so the change is very small.

On the right side, the value goes up. The derivative is positive. The bigger the change, the higher the value of g'(x).

Hope this helps to get an intuitive feel of derivatives.

Not the answer you're looking for? Browse other questions tagged derivatives polynomials curves or ask your own question.