How do I solve an ellipse with three chord lengths and angles?

I have a plane on which is a circle, there are three arbitrary points on the circle ($A$, $B$ and $C$) of which the relative angles are known. The plane the circle is on is then rotated arbitrary line on the plane (through the centre of the circle) to create an ellipse with the three points on it. 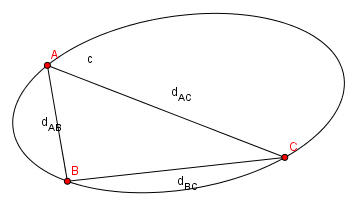 In theory the system should produce four answers, two for R (within a 2PI rotation) and the ability for the major/minor ellipse axis to be switched. The four solutions would be based on the angle of the line of rotation on the plane and the sign of the rotation itself.

Thank you in advance! Lee

If I understand the question properly,

Now the circle has undergone a stretch:

Which makes it an ellipse. It is also rotated by an angle $R$.

Now you are given the lengths of the 3 chords connecting the original 3 points.

First, since you are only given lengths in the ellipse, I don't think there is a way of finding the angle $R$ since that leaves the lengths unchanged.

Second, note that the transformation above does not change the parametric angle of the point in the ellipse. So your angles remain unchanged (except for a $+R$ shift). These are different from the geometric angles of the points which indeed transform to $ \tan^{-1} (\frac{b}{a} \tan t). $

But you can use the chord lengths and the formula you mentioned to form 3 equations in 3 variables: $a, b, r$ where $r$ is the radius of the circle.

Not the answer you're looking for? Browse other questions tagged systems-of-equations conic-sections computational-geometry or ask your own question.

6
Normal to Ellipse and Angle at Major Axis
3
Ellipse center with three points and the semi-axis lengths given
4
Finding the major and minor axis vertices for an ellipse given two conjugate diameters?
0
Unique Specification of Ellipse Given Two Arbitrary Axes Lengths and Axes Orientation?
4
Start and end point of a rotated ellipse
5
Prove that the chord of the ellipse passes through a fixed point
0
Finding the major and minor axes lengths of an ellipse given parametric equations
2
The chord length of an ellipse
4
Finding center and rotation angle of ellipse that contains three points