In differential geometry, there are several notions of differentiation, namely:

I have listed them in order of appearance in my education/in descending order of my understanding of them. Note, there may be others that I am yet to encounter.

Conceptually, I am not sure how these three notions fit together. Looking at their definitions, I can see that there is even some overlap between the collection of objects they can each act on. I am trying to get my head around why there are (at least) three different notions of differentiation. I suppose my confusion can be summarised by the following question.

What does each one do that the other two can't?

I don't just mean which objects can they act on that the other two can't, I would like a deeper explanation (if it exists, which I believe it does). In terms of their geometric intuition/interpretation, does it make sense that we need these different notions?

Note, I have put the reference request tag on this question because I would be interested to find some resources which have a discussion of these notions concurrently, as opposed to being presented as individual concepts.

Of course, there is a lot more to say.

Edit. I decided to extend my answer as I believe that there are some essential points which have not been discussed yet.

Indeed, my comments are speculative and sparse. I wish if this question were answered by someone like P. Michor, to be honest :-)

Since I don't have the time to give a super-detailed answer, allow me to just summarize some things that others have said, adding some additional points in the process. Hopefully this will be at least somewhat helpful.

To me, the exterior derivative is the differentation operator we need for Stokes' Theorem to make sense. The $d^2 = 0$ property is dual to saying that "the boundary of a boundary is empty," and is the very thing that makes de Rham cohomology work. I sometimes think about $d^2 = 0$ as describing the commutativity of second derivatives.

Connections: The main feature here is differentiation along curves.

Connections generalize the case of $\mathbb{R}^n$, where

Connections also let us define the concepts of "parallel transport" and "torsion." When a Riemannian metric is given, there is a canonical choice of connection (the Levi-Civita connection) which gives lots of geometric information. In particular, many classical formulas from the differential geometry of curves and surfaces can be phrased in terms of connections.

Lie derivative: The main feature here is the relationship with integral curves and flows, and the fact that $\mathscr{L}_XY = XY - YX$.

However, unlike connections, Lie derivatives do not give a well-defined directional derivative of vector fields "along curves." The following problem from Lee's Riemannian Manifolds book illustrates this:

Pretty much all of this can be found in Lee's "Smooth Manifolds" and "Riemannian Manifolds" books.

To understand the difference between these two ideas, consider working in coordinates. The Lie derivative will take the form $(\mathcal{L}_{X} v)^a=X^b \partial_b v^a-v^b \partial_b X^a$. The second term indicates that the first derivative of $X^\mu$ is involved when differentiating along flow lines. There is no sensible way to differentiate $v$ in the direction of a vector unless the vector is a vector field or you have additional structure that tells you how to connect nearby tangent spaces (a connection). (The only obvious guess would be $X^b \partial_b v^a$ which gives different vectors in different coordinate systems.)

I think there is an important point that has been overlooked in the above answers: The exterior derivative is the only linear natural operator in the list. This is explained with several variations the book by Kolar, Michor and Slovak cited in Yuri Viatkin's answer.

The Lie derivative is also natural under general diffeomorphisms but only as a bilinear operator, which takes one vector field and one section of a general vector bundle (for example a tensor field) as it's entries. In particular it is a bi-differential operator, so both the vector field and the other section are differentiated.

The covariant derivative initially is natural in a bilinear sense and under the the much smaller (finite dimensional instead of infinite dimensional and generically trivial) group of affine transformations. However the advantage here is that it is tensorial in the vector field entry and only the additional section is differentiated. This allows one to view it as a linear operator mapping sections of a vector bundle $E$ to sections of $T^*M\otimes E$ and in this form (having also given a connection on $TM$) is can be iterated to define higher order operators, which is not possible with either the Lie derivative or the exterior derivative.

In geometric calculus, one deals in not just vector fields but multivector fields--fields that associated oriented planes, volumes, or other types of primitives to each point. These multivector fields are differentiated by an operator denoted $\partial$. It can act on multivector fields in either of two ways. On a multivector field $A(r)$, it can act as $\partial \wedge A$, which is the familiar exterior derivative. This increases the grades of all components of the field by one--vectors become planes, planes become volumes, and so on.

Now, introduce a global rotation field called $\underline R(a; r)$, which acts linearly on the vector $a$ and is a function of position $r$. For brevity, we'll just call this $\underline R(a)$ in most cases. We can, at our discretion, use or set this rotation field to our liking, perhaps because it is convenient, perhaps because it is necessary--you can regard it as inherent to the space if you like.

We can then look at the transformation of $A \mapsto A' = \underline R(A)$. This naturally changes the way we must differentiate. See that

This is just a fancy product rule, with the overdot saying we differentiate only the linear operator, not its argument.

We define the covariant derivative to get rid of the messy second term on the right-hand side. That is,

I'm not as familiar with Lie derivatives, but I'm given to understand that if $B$ were transported along a "flow" generated by $A$, this quantity would measure how much $B$ maintains its value during the process.

Yet another, slightly different approach below :

The problem of course is that we can't compare vectors at different points ( different tangent spaces ) of a manifold when we don't know how to transport vectors from one tangent space to another.
If we want to generalize the notion of a directional derivative to vector fields (and other geometrical objects) on a manifold we have to be able to transport a vector from tangent space to another nearby tangent space in which we can take the difference of two vectors and divide by some notion of a distance.
In absence of some other structure on the manifold the only simple way to do this is by using the concept of Lie dragging a vector field along a congruence. This way we arrive at the Lie derivative which is most fundamental.
The other derivatives are just special cases of the more fundamental Lie derivative. 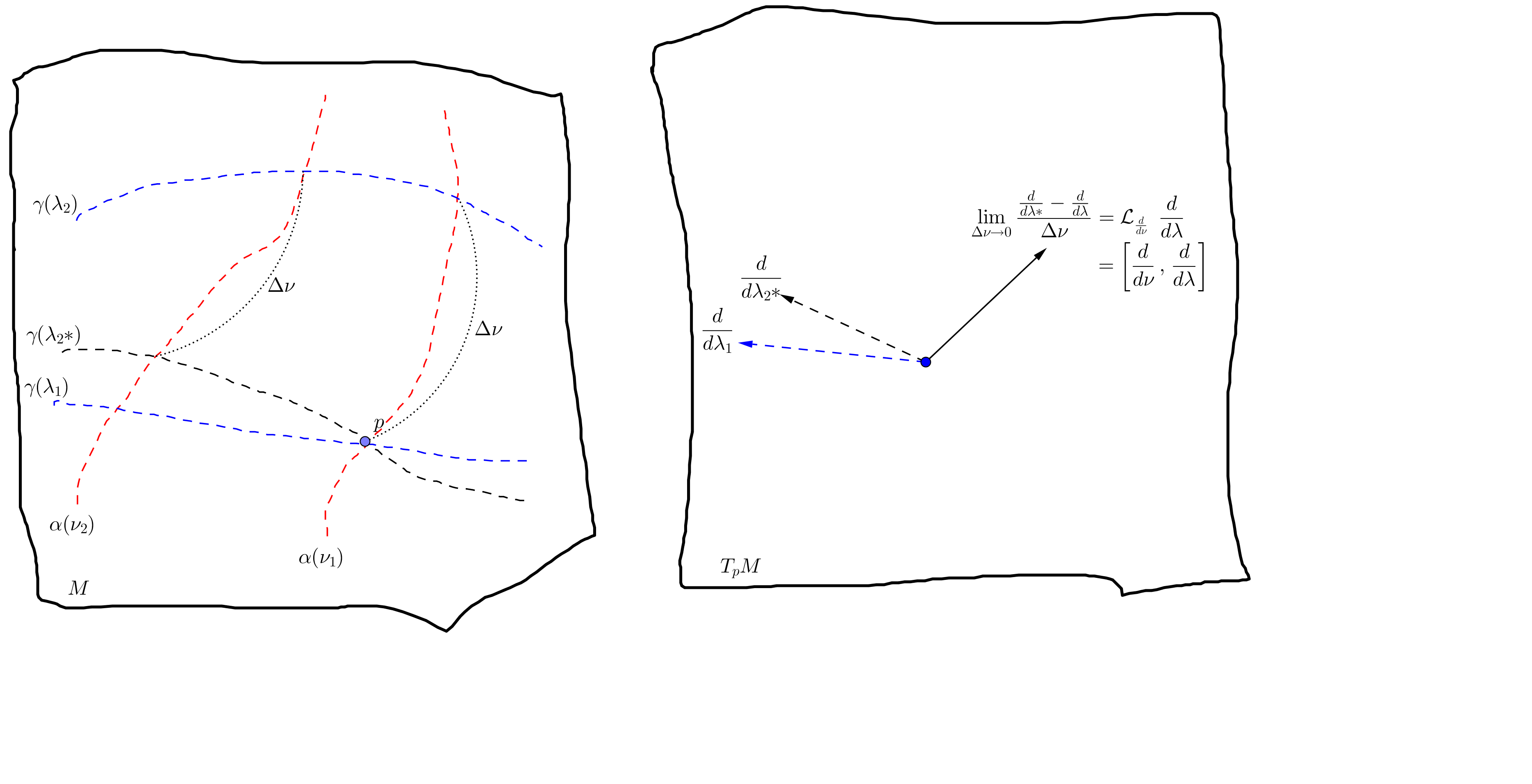 The above shows why this definition is the only logical choice for a generalization of the Lie derivative in the absence of a second congruence (so the only obvious generalization for differentiation along a curve instead of a congruence).

For similarities and differences between Exterior derivative and Lie derivative see this clear explanation : https://en.wikipedia.org/w/index.php?title=Lie_derivative#The_Lie_derivative_of_a_differential_form

Here's an answer that's more abstract, and a bit different in spirit from the others. Not sure if you'll find it useful, but hopefully someone will. This approach is explained in chapter 5 of Kock's excellent text Synthetic Geometry of Manifolds, if you want more details.

Given a manifold $M$ in SDG, we have the the 1-jet groupoid $\Pi^{(1)}(M) \rightrightarrows M$ of 1-jets of local diffeomorphisms. We also have the graph $M_{(1)} \rightrightarrows M$, which is the first order infinitesimal neighbourhood of the diagonal. That is, the elements of $M_{(1)}$ are pairs of infinitesimally close points (to first order). This is a reflexive symmetric graph: the symmetry is the involution $M_{(1)} \to M_{(1)}$ that interchanges the source and target of each edge, and reflexivity is the diagonal map $M \to M_{(1)}$. A morphism of reflexive symmetric graphs is a morphism which is compatible with the reflexivity and symmetry in the obvious way.

Given a vector bundle $E \to M$, we have the smooth groupoid $GL(E) \rightrightarrows M$ of linear isomorphisms between fibres in $E$.

From the point of view of representation theory and synthetic differential geometry, the Lie derivative of sections of a vector bundle $E \to M$ comes from a groupoid representation of the 1-jet groupoid $\Pi^{(1)}(M) \rightrightarrows M$ on the groupoid $GL(E) \rightrightarrows M $. Thus, we have a canonical Lie derivative of sections of any natural bundle.

Here is my humble take on this very interesting question. I think of the exterior differentiation $d$ as some kind of infinitesimal Stoke's theorem, so to speak. Namely, if $\alpha$ is a $k$-form, then $d\alpha$ is of course a $k+1$-form, and it can be defined at some point $p$, in some directions determining a $k+1$ dimensional subspace of the tangent space $T_p$, by essentially taking a small $k+1$ dimensional closed ball, and associating to it the integral of $\alpha$ on the boundary $k$-dimensional sphere, and then normalizing this integral properly and then letting the radius of the ball go to $0$. This is similar to what one sees in some Mathematics for Engineering books actually, albeit in some special cases (divergence, curl etc.).

I think of a covariant derivative mathematically using parallel transport and holonomy, and physically, for a connection on some unitary vector bundle, as some kind of potential (similar to the electromagnetic potential, but of course, it could be more complicated).

Philosophically speaking, I like to think of these derivatives using the most intuitively appealing (for me) definitions, which are usually close to the historical ones. However, when it comes to computing them, of course, this is almost never the easiest approach: then one can resort to formulas such as Cartan's magic formula $L_X = d \circ \iota_X + \iota_X \circ d$, and so on.

I would like to make a remark. In a torsionless manifold, the link between these derivatives may be found in the (very good) reference mentionned by Yuri Vyatkin (book of Yano, 1955). Another point is very interesting for practical use of Lie derivative in the same reference : the index convention for the covariant derivative may lead to some errors when using Lie derivative of tensors in a manifold with torsion and curvature.

Not the answer you're looking for? Browse other questions tagged reference-request differential-geometry differential-forms exterior-algebra big-picture or ask your own question.