Angles between vectors: is my textbook wrong here, or am I mistaken?

Below is a screenshot of my Calculus textbook, Stewart's Calculus: Early Transcendentals 8th edition. It's taken from the chapter on Vectors.

Where $\theta$ is the angle between the two vectors.

As I understand it, the angle between two vectors is measured if you start both vectors at the same tail, right? So in the diagram above, wouldn't the angle between the two vectors actually be 180-75 = 105 degrees? If so, why does my textbook use 75 degrees in its calculations? Is it because the sine of either of these angles will be the same, since both angles are above the x-axis in the 1st and 2nd quadrants?

Edit: or is the position vector in this case extending from the bolt to the end of the wrench? If that's the case, then I can see why it would be 75 degrees, since you would put tail to tail.

The position vector $\vec{r}$ is the vector with its tail at the bolt and its head at the point of application of force. 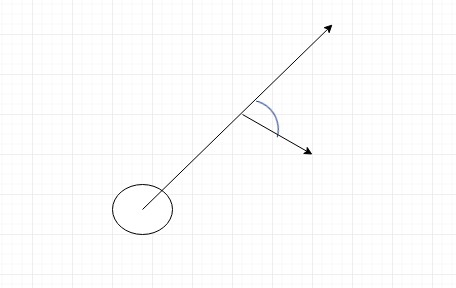 a) the position vector is usually taken to start from the origin, i.e. the bolt, so shift its tail to the end of the wrench and the angle will be $\pm 75^ \circ$.
b) depending on how you do the cross product ($r \times F$ or $F \times r$) and which value you take for the angle, the torque will change sign.
c) The standard way is to take $\tau = r \times F= |r|\, |F| sin \theta$ with $\theta$ being the trigonometric angle spanned by $F$ in moving away from $r$.
In this way the torque is positive when it is exerted CCW, same as standard direction in trigonometry, and it will be a vector directed as the axis $z$, in a standard (right-hand rule) reference system. In your case $\theta$ would be $-75^\circ$ (it is CW), and the torque would be negative (i.e, exerted CW, vector directed as $-z$).

Not the answer you're looking for? Browse other questions tagged vectors mathematical-physics word-problem or ask your own question.