In his Topology and Geometry YouTube lectures, especially lectures 5 and 6, Tadashi Tokieda helpfully proves that every knot made of curves, while nontrivial in $\mathbb R^3,$ becomes trivially the unknot in $\mathbb R^4$ and above.

One way I have to visualize this comes from my understanding of the projection of the Klein bottle into $\mathbb R^3$. This consists of visualizing a 3D point's position within the 4th dimension as a color, say ranging from blue through purple to red. So any object that we can embed in 3D can be colored all-blue without collision; but the reason the Klein bottle does not self-intersect is because the color smoothly varies over its surface and a blue tube penetrates the red surface: hence they don't collide at all in 4D.

Similarly, we take some knot as made of blue string; we can undo any crossing by locally shifting the color of one strand to red, so that it does not collide the blue string, then passing it "through" the other string without intersection, then returning it back to blue, smoothly. The other parts of the string smoothly fade to purple for a bit, but we clearly never have any point passing through another point at the same place with the same color.

Now Dr. Tokieda also proves a theorem about moving submanifolds within a manifold through other submanifolds: in 4D you can't move a plane through a line without intersection at a point, except in degenerate cases. Certainly, there is no moving a plane through a plane. And this makes sense too; let the line be a blue line and let the plane have a random red-blue gradient, only in degenerate cases is the plane monochrome or are the level sets of color parallel to the line. In every other case the point of intersection between the line and plane passes through all of the colors of the plane, including the blue of the line, which is a point of 4D intersection.

So the intuition seems good, but points out that this result is very dependent on the infinite extent of the plane and line. And this intuition has led me pretty well until these latest lectures where Dr. Tokieda wraps the curve of a knot with a thin tube that closes upon itself. If you do this with a loop you get a torus, so I will call this a "toroidified" curve.

He insists that the resulting "knots" cannot be unlinked until you get to $\mathbb R^6$ because of the above theorem where lines can't be moved through planes. And he not only makes this point outright, but also by quizzing students on it. It strikes me that the simplest version of his argument would be the claim that if you started with a Hopf link and turned them into two linked tori, you could not unlink them until you get to $\mathbb R^6$. The above "color shifting" arguments say that this is flat-out wrong, in $\mathbb R^4$ you can just shift one of the tori to blue, pass them through each other, and shift it back to red. Furthermore it seems like the "purple" part can be clustered in a space that the curves never overlap as they pass through each other. In other words, there seems to be no reason that the "tube" can't follow the exact same path that the "string" did, when you toroidify a curve.

To give an idea of what can happen, I have tried illustrating a possibly knotted torus in $\mathbb{R}^4$ (I have not proved that it is knotted). The convention is like that for knot diagrams: the part that is "below" another part is drawn with a gap --- for sake of terminology, let's say the part which passes wover the wunder part is drawn uninterrupted, where the wunder part is drawn with a gap. (the "w" is coming from $x,y,z,w$). The illustration represents the torus passing wunder then wover its own wall. Somewhere between, the surface must be the same color as the wall, which is an obstruction to the "just recolor and pass through" argument. 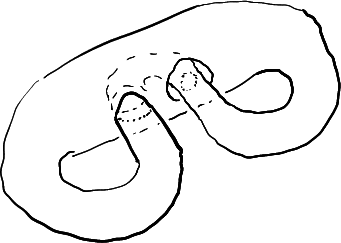 Not the answer you're looking for? Browse other questions tagged geometric-topology knot-theory low-dimensional-topology or ask your own question.

6
Computing knot/link groups
2
Density of continuous knots in the plane transversal to some circles
1
Why is the Hopf link the only link with knot group $\mathbb{Z} \oplus \mathbb{Z}$?
5
How to visualize the real projective plane $\mathbb RP^2$ in three dimensions, if possible?
0
Knot Complement of Knot Sum of Two Hopf Links
2
Map of $\mathbb{R}^3-Knot \to S^1$
4
Proving this 1-manifold is the Hopf link