What is a geometric construction corresponding to elliptic curve addition for Sharygin-isosceles triangles?

Recently I learned that the real points of the identity component of this curve naturally parameterise Euclidean triangles with a neat property. Specifically they are scalene triangles such that the triangle formed by intersecting angle bisectors with opposite sides is isosceles. Here's an example: 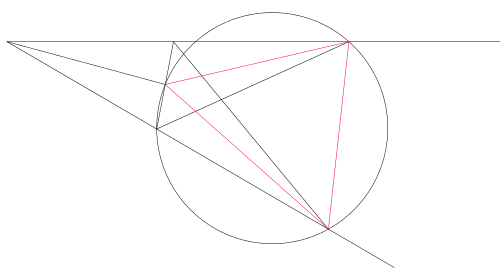 (The triangle in red, constructed from one internal and two external angle bisectors, is isosceles.)

Let's call this property $P$. See here for a fuller discussion, with more pictures and a little history.

This means that given two triangles satisfying property $P$, there is a naturally associated third: their sum under elliptic curve addition. My questions are:

Regarding the second question, as discussed here it seems like triangles are out but it seems plausible we could find something. E.g., an idea with the sort of flavour I have in mind is as follows: a triangle satisfying property $P$, has a distinguished side. We can regard the other two sides as a singular quadric. Perhaps admitting non-singular quadrics gives us room to find an interpretation for points on this other component.

Not the answer you're looking for? Browse other questions tagged euclidean-geometry triangles elliptic-curves plane-geometry or ask your own question.