So, about a decade ago my company came up with pricing for some banners that we sell. the prices are as follows.

and I can not figure out where these prices came from. The guy who wrote them up quit before I started, and I need to figure out the equation to extend the pricing up and down.
Here's what I DO know.
The equation is based off two things
The cost of the banner per square foot
The cost of labor
I do not need to figure out the factors that went into pricing for either, I just need to know what numbers they are. Best guess for labor was 63 dollars, it might not be, but if that works, it sounds good to me.
my attempt was to figure it out using substitution with a system of equations.

with a second set of

BUT the first set gives me

and the second set gives me

which leads me to believe that the hours per banner change. Meaning the y in each equation is different. Is there a way to determine what these two variables are, even though one changes, probably linearly? If not, I'll just do a whole new equation, the only issue is the number of variables going into each of these variables. Thanks.

I plotted the cost as a function of the area of each banner here. I also made two regressions--one linear and the other quadratic. I recommend you use the quadratic regression to project the prices, because the quadratic more closely matches the data trend and any extrapolation using this regression will give a higher price than the linear regression (you are less likely to undercharge). 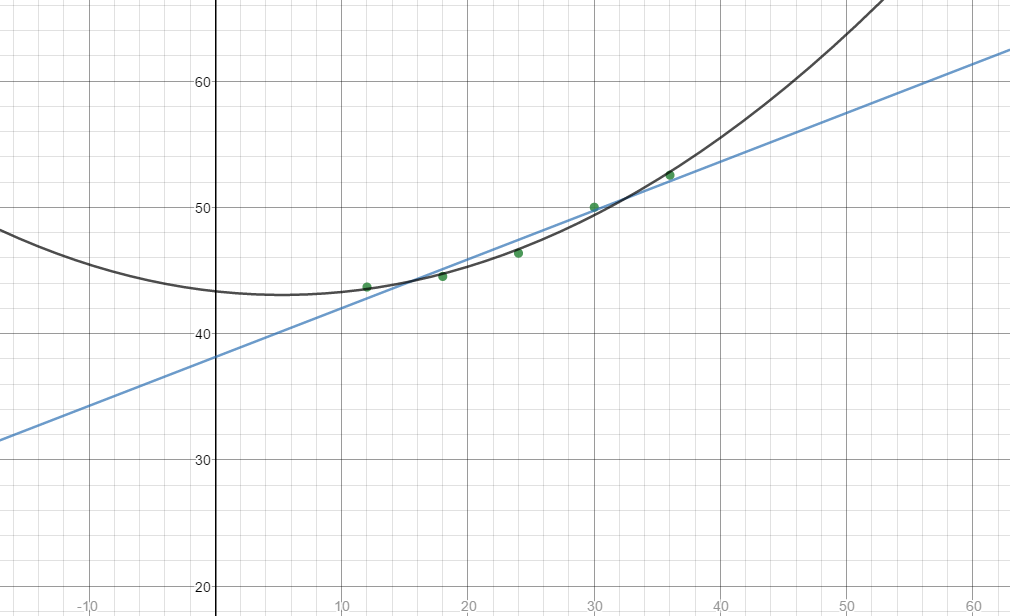 The quadratic regression gives the equation

In the end, I agree with Wildcard's comments; you should use a heuristic method to find the best price for your product, but this is a good starting point.

Each time you go up a size you add 2 feet to the length. The added cost for these 2 feet varies from 0.84 to 3.64, which is quite a variation. This shows you will not be able to generate a formula of $A + B(length)$ that fits the old data, as $B/2$ should be the added cost per square foot. Clearly labor is not $63$ as all the prices are less than that. You can do a least squares fit, shown below, which gives price =$38.14+1.16length$ 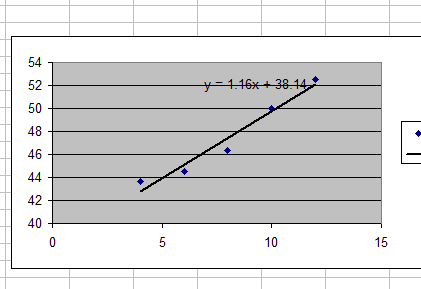 If you use the formula .4*area + 38, you'll get approximately what the current prices are. It's an easy formula to apply if you want the new prices to seem consistent with the existing prices. However, if your new sizes include dramatically larger areas, then spend some time investigating costs.

Not the answer you're looking for? Browse other questions tagged linear-algebra algebra-precalculus or ask your own question.

16
Intuitive reasoning behind the Chain Rule in multiple variables?
5
What are the steps to solve this simple algebraic equation?
0
Cost of cable problem
1
Functions - if statement in equation: applying discount to total price for up to 10 products
3
Building an equation. Trying to figure out the relationship between variables.
4
Solve for $a,b,c,d \in \Bbb R$, given that $a^2+b^2+c^2+d^2-ab-bc-cd-d+\frac 25 =0$
2
Algebraic equation for increasing cost