In how many ways can you colorize the vertices of a grid with 4 colors so that every unit-square vertices are all of a different color?

In how many ways can you colorize the vertices of an $(n\times n)$-square forming an $(n+1)$-grid with $4$ colors so that every unit-square vertices are all of a different color ?

Consider a rectangular grid containing $m$ squares in each column and $n$ squares in each row. Label the rows of squares by the indices $1$, $2$, ..., $m$ and the rows of vertices by the indices $0$, $1$, ..., $m$ and do similarly for columns. Suppose that the vertices of the grid have been colored in such a way that every one of the $mn$ squares contains a vertex of each color.

Now suppose that a new row of squares is added to the grid. Can the previous coloring be extended to the last row of vertices (row $m+1$)? If so, in how many ways? The answer to the first question is that it can. This is so because we can color row $m+1$ the same way we colored row $m-1$. To answer the second question, notice that, once the color of any vertex in the row is decided, the colors of all the remaining vertices in the row are determined, assuming a coloring is possible at all. (Successively color neighbors of previously colored vertices until the whole row is colored. Each vertex that gets colored is the fourth member of a square in which three vertices have already been colored. Either the fourth color will be uniquely colored or two of the three colors already used will be the same, making the coloring untenable.) Since the first vertex can be colored in two ways, we conclude that row $m+1$ has at least one coloring and at most two colorings.

Added summary: Let's formalize and flesh out a few details of the conceptual explanation above.

Proposition: If an $m\times n$ grid, $m,n\ge1$, has been four colored so that each of the four colors is used in every square then at least one of the following holds.

Proof: Observe that if a row or column uses only two colors, then the colors in that row or column alternate, $ababab\ldots$. Now perform induction on the number of squares in the grid. The base case is the case of one square, for which the statement clearly holds. For the induction step, at least one of $m$, $n$ is greater than $1$. Let's say $m$ is. Then, by the induction hypothesis, the statement holds for the four coloring of the $(m-1)\times n$ grid obtained by deleting the last row of vertices. Suppose that the rows of this smaller grid each use only two colors. If the colors in the last row of this smaller grid are $ababab\ldots$, then the colors in the deleted row can only be $cdcdcd\ldots$ or $dcdcdc\ldots$, where $c$ and $d$ are the two colors different from $a$ and $b$. If the rows of the smaller grid each use three or more colors, then the columns each use only two colors. Furthermore, the deleted row (row $m$) is colored the same as row $m-1$, and hence introduces no new color into any column. $\square$

I thought about this for a while and came to a conclusion: 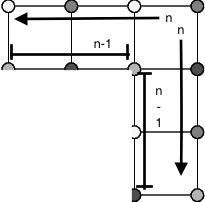 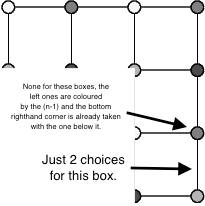 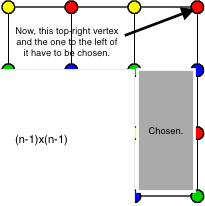 Thus, for an n-sized grid there are $4*(n-1)$ ways of colorizing the vertices satisfying the conditions above. However, if we look more carefully, we can find cases where only one of these 2 choices are given to us and that in fact, we only ever get one of these 2 choices. Consider the case where one of our 2 colours to "choose" from is also the colour of the vertex 2 up, 1 left from the bottom righthand corner. If this was true, we would only have one choice in how we arrange the colours, and that would be the same as the penultimate column of the $(n-1)$ box.

If this was true, another consequence would be that you could still choose one of 2 configurations in the top righthand corner, since we know the reflected columns fact. However, if in the first case we had 2 choices then by the time we had got to the top righthand corner, we would not have 2 choices there, since the columns would not be reflected.

Thus, we derive the number of ways to colour an n by n grid using 4 colours such that every unit-square vertices are a different colour with 4 colours is $4!*(2^n-1)$.

4
How many ways are there to color vertexes of a $n\times n$ square that in every $1\times 1$ squares we should have $2$ blue and $2$ red vertexes?

1
Vertex coloring
6
Given an $n \times n$ square grid, how many ways can we remove $k$ vertices with the graph still connected?
5
How many ways are there to color $1\times1$ squares in a $4\times5$ rectangle?
9
What is the largest possible number of moves that can be taken to color the whole grid?
2
Squares sharing a side have different colors
20
How many colors are necessary for a rectangle to never cover a color more than once?
3
Given a grid of $m \times n$ squares in black and white. Given a rule, which grid sizes $m \times n$ (with $m,n \ge 3$) have a valid colouring?
3
Smallest $m$ such that, for any $m$ unit squares in an $n\times n$ grid, the centers of some four of them are vertices of a parallelogram
16
How close are the closests cells of the same color in a periodically colored grid?
6
We color each unit square of a table $10\times 10$ with one color so that …