Function with the symmetry of a hyperbolic regular tiling

where $\mathbb{D} = \{z\in \mathbb{C} : \vert z \vert \le 1\}$ is the unit disk identified with the Poincaré disk model of the hyperbolic plane, which has a zero of multiplicity 7 at each vertex of the order-7 triangular tiling of the disk: 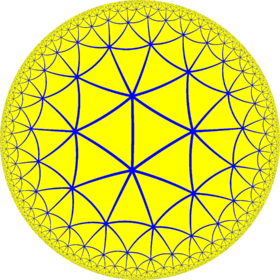 (with one of the vertices at the origin and one of the central edges in $\mathbb{R}^+$, for example, so that the function is unique up to scale), and a pole of multiplicity 3 at each vertex of its dual tiling.

Has this function been studied somewhere? Is there an explicit expression for it, maybe in terms of special functions?

I know that similar functions exist for regular spherical tilings in the Riemann sphere (see for example this question), and powers of Weierstrass P functions give the corresponding functions for Euclidean tilings of the complex plane.

First of all, the proper description of your map is as a holomorphic map ${\mathbb D}\to CP^1= {\mathbb C}\cup \{\infty\}$ (this is what it means to have poles) which is automorphic with respect to a certain group $\Gamma$ of linear fractional transformations of ${\mathbb D}$ preserving the order order 7 tiling: $$ f(\gamma z)= f(z), \gamma\in \Gamma, z\in {\mathbb D}. $$ Such $\Gamma$ is not unique and neither is $f$ (even after your normalization), unless you impose further restrictions. Firstly, you want to have $\Gamma$ which is the $(2,3,7)$ von Dyck group. To describe this group geometrically, pick one of the triangles $T$ in your tiling. Let $v$ be one of its vertices, $o$ the center of $T$ and $p$ the midpoint of an $e$ edge containing $v$. The group $\Gamma$ is discrete, generated by order 7 primitive elliptic rotation around $v$, order 2 elliptic rotation around $p$ and order $3$ rotation around $o$. (Rotations are understood here as linear fractional transformations conjugate to the euclidean rotations.) The quotient $X={\mathbb D}/\Gamma$ is topologically a 2-sphere with three distinguished points $[v], [o], [p]$, projections of $v, o, p$. The complex structure from ${\mathbb D}$ descends to a complex structure on $X$ making it a Riemann surface. As any compact Riemann surface of genus $0$, it is biholomorphic to the extended complex plane, $CP^1$. Such a biholomorphic map $h$ is not unique, but it becomes unique if you require $$ h([o])=\infty, h([v])=0, h([p])=1. $$
The composition of the (holomorphic) projection $\pi: {\mathbb D}\to X$ with $h$ is your automorphic function $f$. It will have a triple pole at $o$, order 7 zero at $v$ and also will send the edge $e$ to the unit segment $01$ in the real line. By automorphicity, the same will be true for all other vertices are centers of triangles.

This description is not explicit of course. However, the function $f$ (or its multivalued inverse) can be found as a solution of some ODE of the form $S(F)=\varphi$, where $\varphi$ is a certain meromorphic quadratic differential and $S$ is the Schwarzian derivative. Equivalently, $F$ is the ratio of two independent solutions of Fuchsian linear 2nd order ODE, of the type: $y'' + \varphi y=0$, where $y$ is a function of one complex variable.

This ODE can be made very explicit if you look at the target space (the extended complex plane); I can write it down if you are interested and when I have time. The differential $\varphi$ can be made very explicit on the target space but less so in the unit disk (one can find it as an infinite sum, a Poincare series). All of what I describe was known to Poincare and can be found in books on automorphic functions, like Ford's "Automorphic functions".

Once you know $f: T\to H$, you get $f: {\mathbb D}\to CP^1$ by using the Schwarz reflection principle (to define $f$ on the image of $T$ under the hyperbolic reflection in the edge $e$) and then the automorphic equation $f(\gamma z)= f(z)$ on the rest of the unit disk.

I have not heard of this.

A lot of people who play with hyperbolic tilings check in with me to seek my opinion on this or that.

The equiangular or steriographic projection of hyperbolic geometry is bounded. The only unbounded one i know is the equiperimeter version, which has rings that run as the cosh(nr).

But i can't ever recall anyone ever putting the h2 or e2 onto the complex plane. A number of people have tried to suggest some sort of coordinate system, but i point out these turn very dense very quickly.

Not the answer you're looking for? Browse other questions tagged complex-analysis closed-form hyperbolic-geometry tiling or ask your own question.

7
Polyhedral symmetry in the Riemann sphere

22
how to generate tessellation cells using the Poincare disk model?
1
Triangular tiling of hyperbolic plane
2
Perimeter of $(p,q)$ tiling of the hyperbolic plane
3
Ruler and Compass in the Hyperbolic Plane
3
Properly drawing a Penrose tiling using the pentagrid method
1
What regular or semiregular hyperbolic tiling has the smallest average tile area?