How similar are circular and parabolic paths?

I'd for a long time thought of parabolas as semi-circles.

However, if you take half of a circle the ends will - look - parallel, where as parabolas continue to extend horizontally and infinitely.

Are the only similarities then the fact that they're curved?

Notice: I hope the pictures explain themselves and that you enjoy pondering over this post :-)

Circles and parabolas are both second degree equations, meaning that they can be created by cutting open a cone (conic sections): (You could also make these by shining a flashlight) 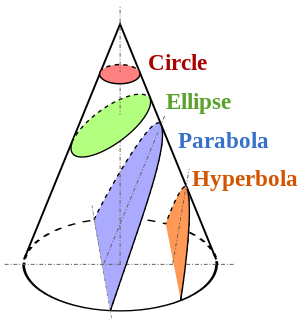 This is related to eccentricity. 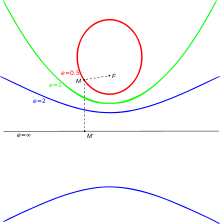 You could imagine eccentricity to be how much these graphs are stretched: ($e=$ eccentricity)

while probably not what you were thinking of, sinusoidal functions look parabolic locally: 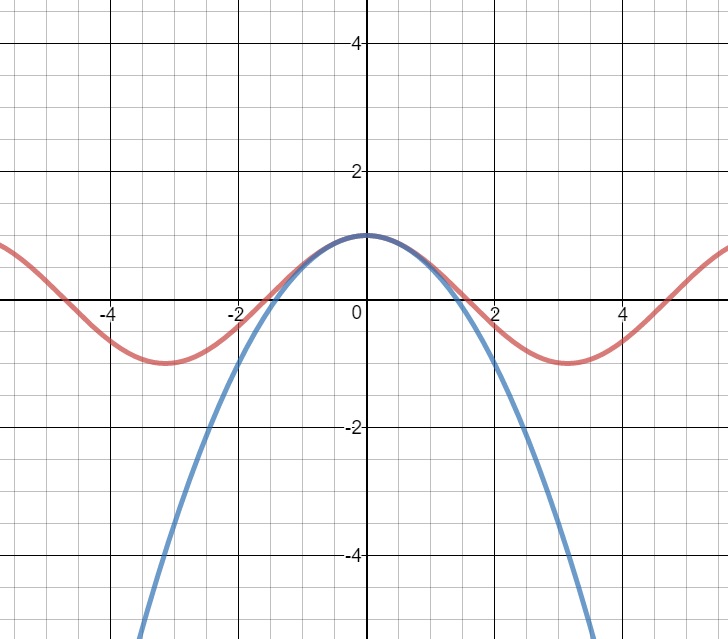 which is due to Taylor's theorem.

I should perhaps begin this answer by saying that, in many (often important) ways, parabolas and circles are very different. For example, a particle on a parabolic path will shoot off to infinity, while a particle on a circular (or, generally, elliptical) path will not; if you're flying a spaceship around a planet and you're running out of fuel, you might care about this difference!

Also, sinusoidal graphs are very different to circles: at the roots of $\sin$ we have a gradient of $\pm1$, so the tangent line never goes vertical like it would on a circle.

Sinusoidal graphs are also different to parabolas, but I haven't (yet) managed to come up with so easy a way to see the difference. At worst you can just try to figure out what the correct parabola would be and deduce that no such parabola exists.

I mentioned projective geometry in the comments and I'd like to stay true to my word. As I said, I don't want to get bogged down in technical details, but the answer is a bit long nonetheless.

The projective geometry is the proper setting for talking about "points at infinity." You may or may not have heard that "parallel lines meet at infinity" (if you haven't, don't worry). This statement makes no sense in ordinary geometry, but (plane) projective geometry is specially designed and set up so that we can make such statements precise. In the projective plane $\mathbb{RP}^{2}$, there is a line of points "at infinity," and, just like there is always a unique line going through two given points, there is also always a unique point lying on two given lines: lines in general position meet at one point, just like in the affine plane $\mathbb{R}^{2}$, while parallel lines meet at infinity.

So far, what I've said about the projective plane is just hand-wavy algebra. But projective geometry really stems from trying to draw the world around us: we see the world in perspective, resulting in certain projective features in our vision.

For example, one can imagine that if we lived on a perfectly flat plane that extended infinitely in all directions, then the railroad tracks in this image would appear to meet at the horizon (they don't in the image due to the curvature of the Earth, but a plane has curvature zero, thereby removing that problem). But they're railroad tracks, so they must be parallel - parallel lines that "meet somewhere". The reason they would appear to meet at the horizon is that we would be seeing the projective plane around us, wherein the horizon line would be the line at infinity. This at least makes some intuitive sense: if you're standing on an infinite plane, and you still see a horizon (which you must do if, say, the ground is green and the sky is blue), then the horizon must be infinitely far away: the line at infinity. Moreover, the railroad tracks are parallel lines, so they must meet at a unique point on the line at infinity, i.e., at some point on the horizon.

Hopefully you can fill in the rest of the coordinate system with your imagination. Note that the "vertical" lines $x=7,6,5,\ldots,-5,-6,-7$ are parallel, and hence all meet at the same point on the horizon.

We can sketch the parabola $y=x^{2}$ on such a coordinate system. Here's what we get:

At this point (if my freehand drawing skills are good enough), you might be thinking "Will, that's not a parabola, that's an ellipse" (and if you aren't thinking that, then I need to improve). Indeed, I have more-or-less drawn an ellipse, but you even know in advance that it can't be an ellipse in the usual sense, because it meets the line at infinity.

So you see that, projectively, parabolas and ellipses are at least related, even if you aren't convinced they're the same. With an additional helping of mathematical formalism (which would take a good few hours of lectures to properly explain) one can make everything I've said so far completely rigorous, work in "homogeneous coordinates" and actually write down "projective changes of coordinates", that keep the underlying geometric objects the same (at least, projectively the same) but transform the corresponding polynomial equations into each other, and it turns out that there is indeed a projective change of coordinates that transforms $x^{2}+y^{2}=1$ into $y=x^{2}.$

Finally, the curvatures of the Semicircle and Parabola are equal only at their apexes, that is at the (0,-1) point on the graph. 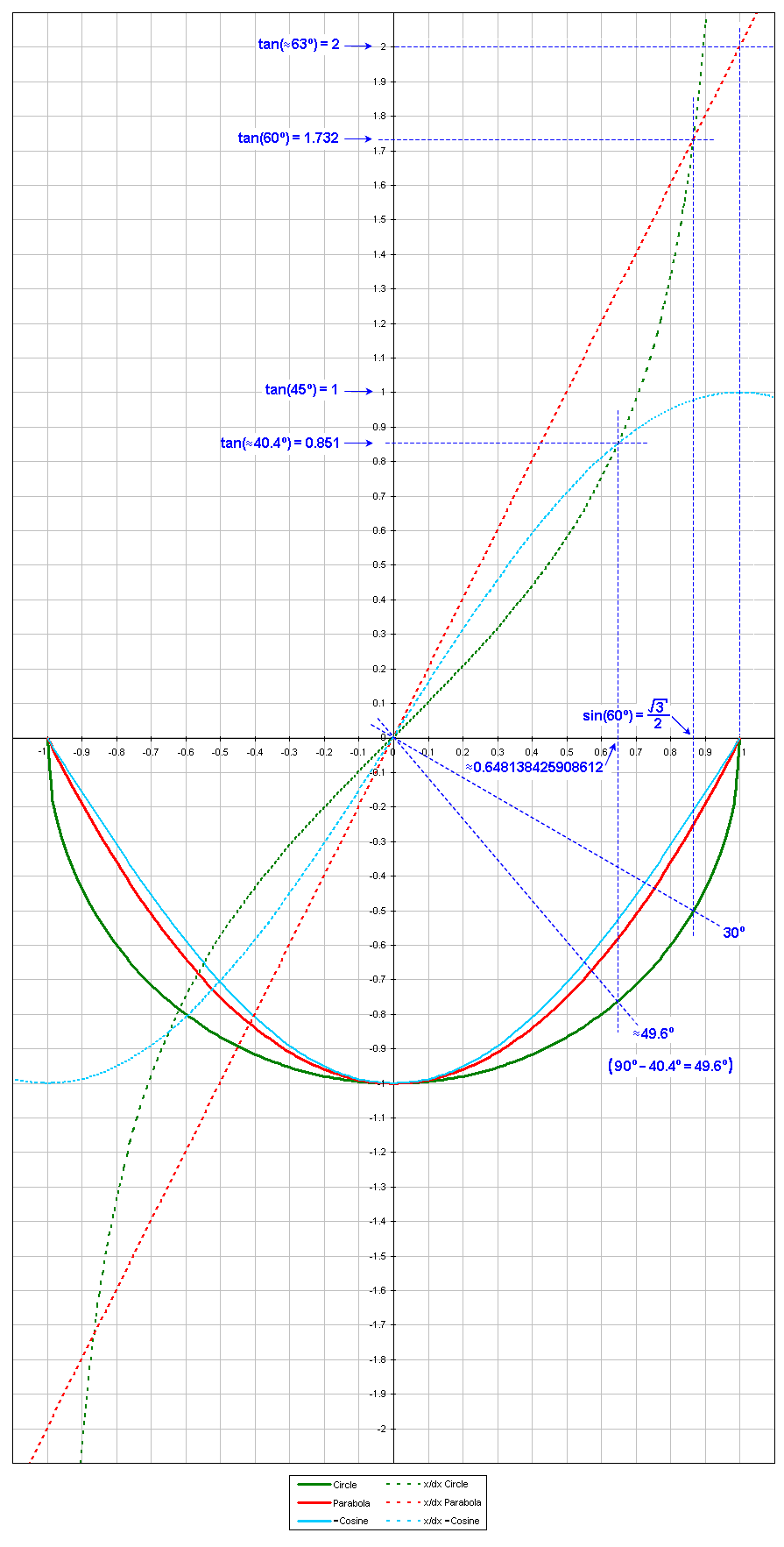 P.S.
It is possible to analyze other curving functions the same way. For example, the normalized Hyperbolic Cosine (shifted down by -2), will have the same 3 points common with the Semicircle, Parabola and the Cosine curve in the -1≥x≥1 domain, but it will fit between the Semicircle and the Parabola (the cosh() matches the Parabola better than -cos()) and the ends of its arms will have a ±60º slope when Y=0. The slope of the Hyperbolic Cosine is equal to the slopes of the Semicircle or the Cosine Curve at some X coordinate, but is never equal to the slope of the Parabola in the -1≥x≥1 domain, besides the trivial case at X=0. I am not including the cosh() on the graph, because the OP did not ask about it.

I hope you are not under the impression that these are the only possibilities. There are many different possible curves, infinitely many in fact, parabolas and semi-circles are only 2 examples. The sine curve is neither piecewise parabolical, nor piecewise semicircular. It is a different curve altogether. 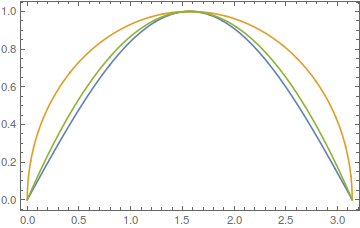 Sinusoidal graphs can be approximated by parabolas in some regions ... depending on the type of sinusoid, the graph may be exactly replicated by linking parabolas together.

You are correct in saying that parabolas are linked to circles, but not in a simple way, as circles have tangents that rotate about completely as you rotate around the circle; parabolas do not.

Parabolas also are onto functions, whereas circles cannot be.

Not the answer you're looking for? Browse other questions tagged trigonometry circles parametric or ask your own question.

1499
Visually stunning math concepts which are easy to explain

22
Are there parabolic and elliptical functions analogous to the circular and hyperbolic functions $\sinh$, $\cosh$, and $\tanh$?
0
Compute angle and radius of a circular segment
3
Geometry question: ray paths and circles
4
Should we re-define Sine?
0
How to parametrize circular paths?
0
Circular Trigonometry Word Problem: How to interpret the equation?
0
How to find the perimeter of a triangle with circular ends?