Why does the Mandelbrot set appear when I use Newton's method to find the inverse of $\tan(z)$?

Here are the results:

To be a bit more explicit:

The function I am iterating per newtons method is

Here is a clearer picture along with a picture generated with the regular equation for the Mandelbrot set, each with 100 iterations. 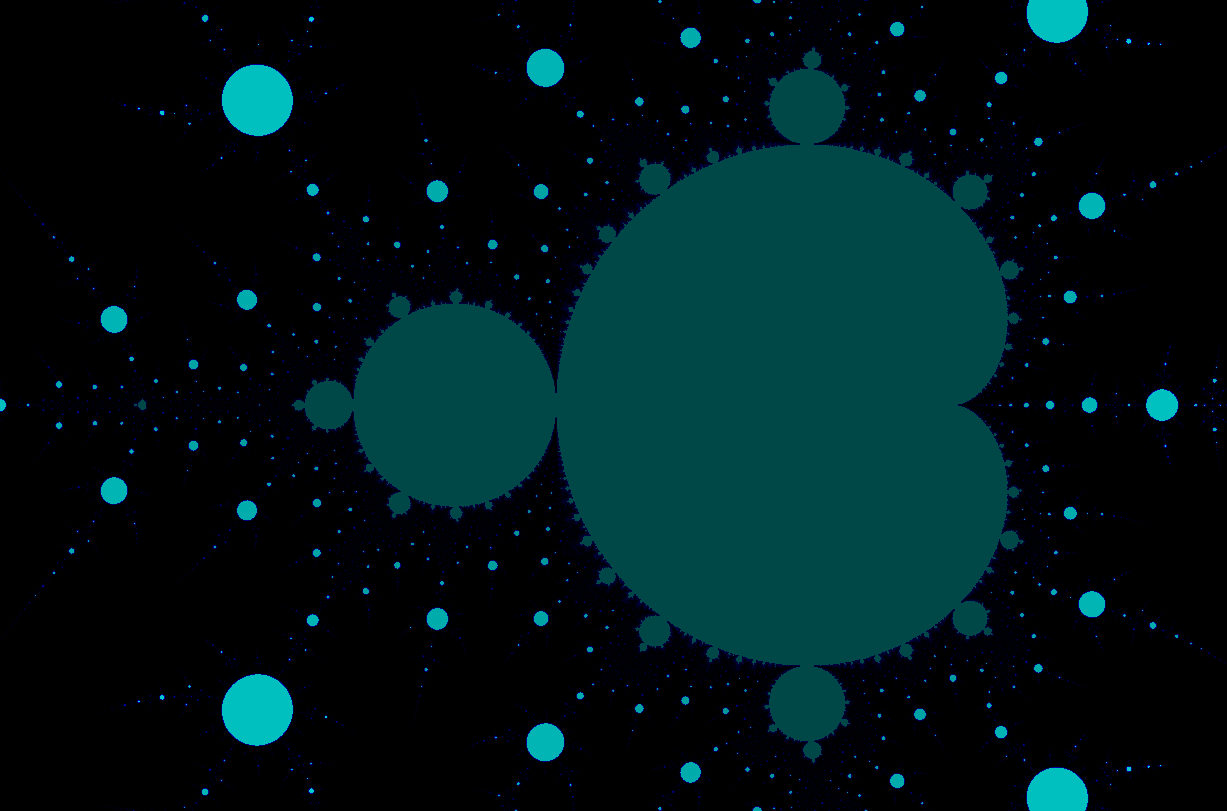 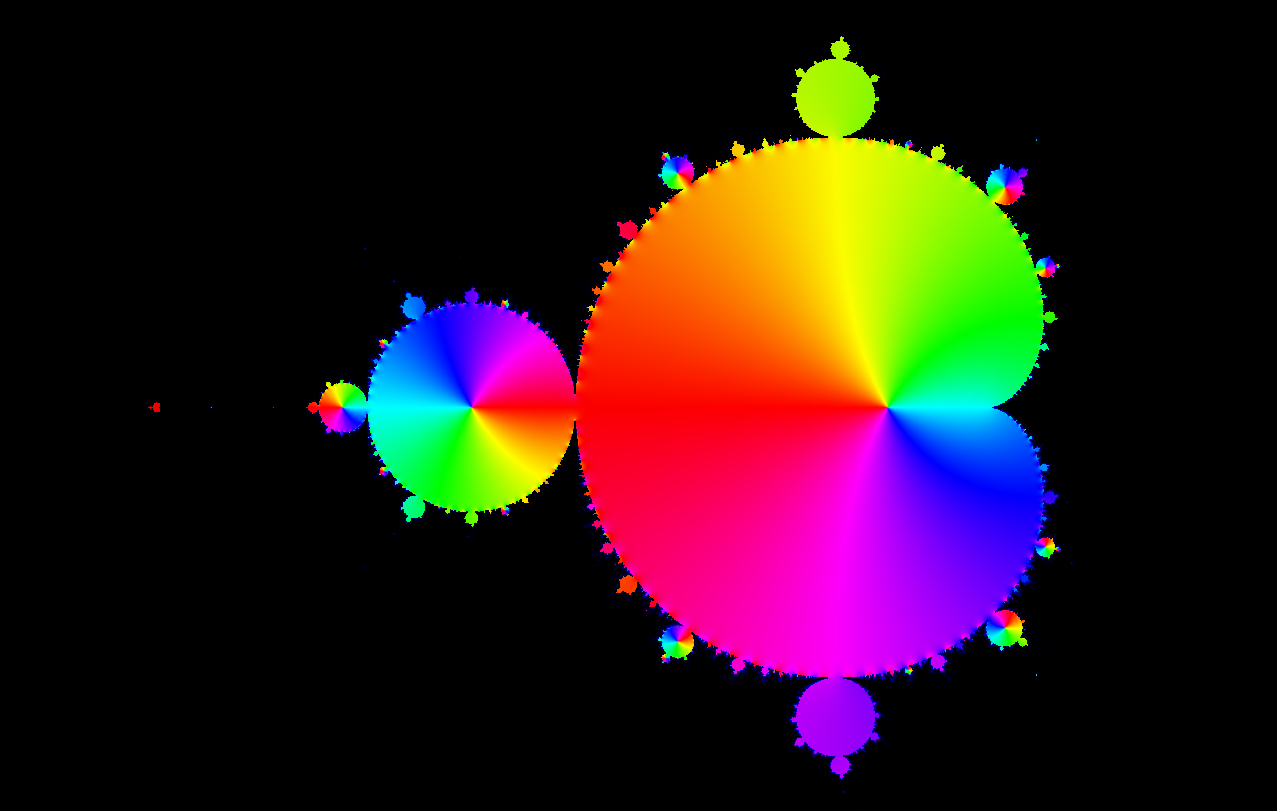 You'll notice that the sign of my recursion seems to have flipped since the first picture. I'm not quite sure what the cause of that is, but distributing the negative sign in my recursion so

seems to resolve the issue.

I found something else interesting. If you alter the recursion which gives the Mandelbrot set to be $y_{n+1} = y_{n}^2 - m\pi(z-m\pi)$ then the mandelbrot set appears at the exact location as in the other equation, and is the same size! I would really like to know why.

Here is an example 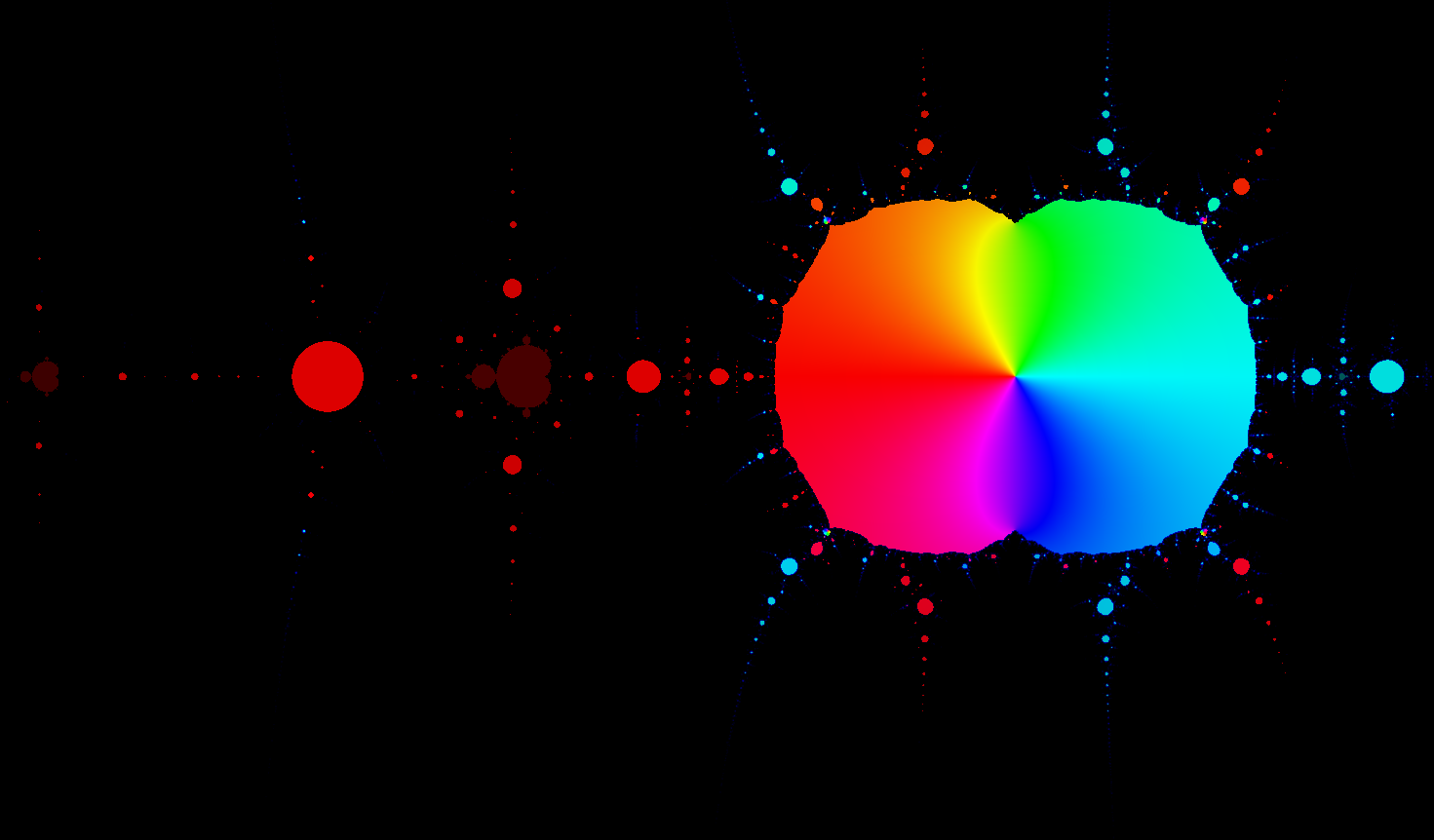 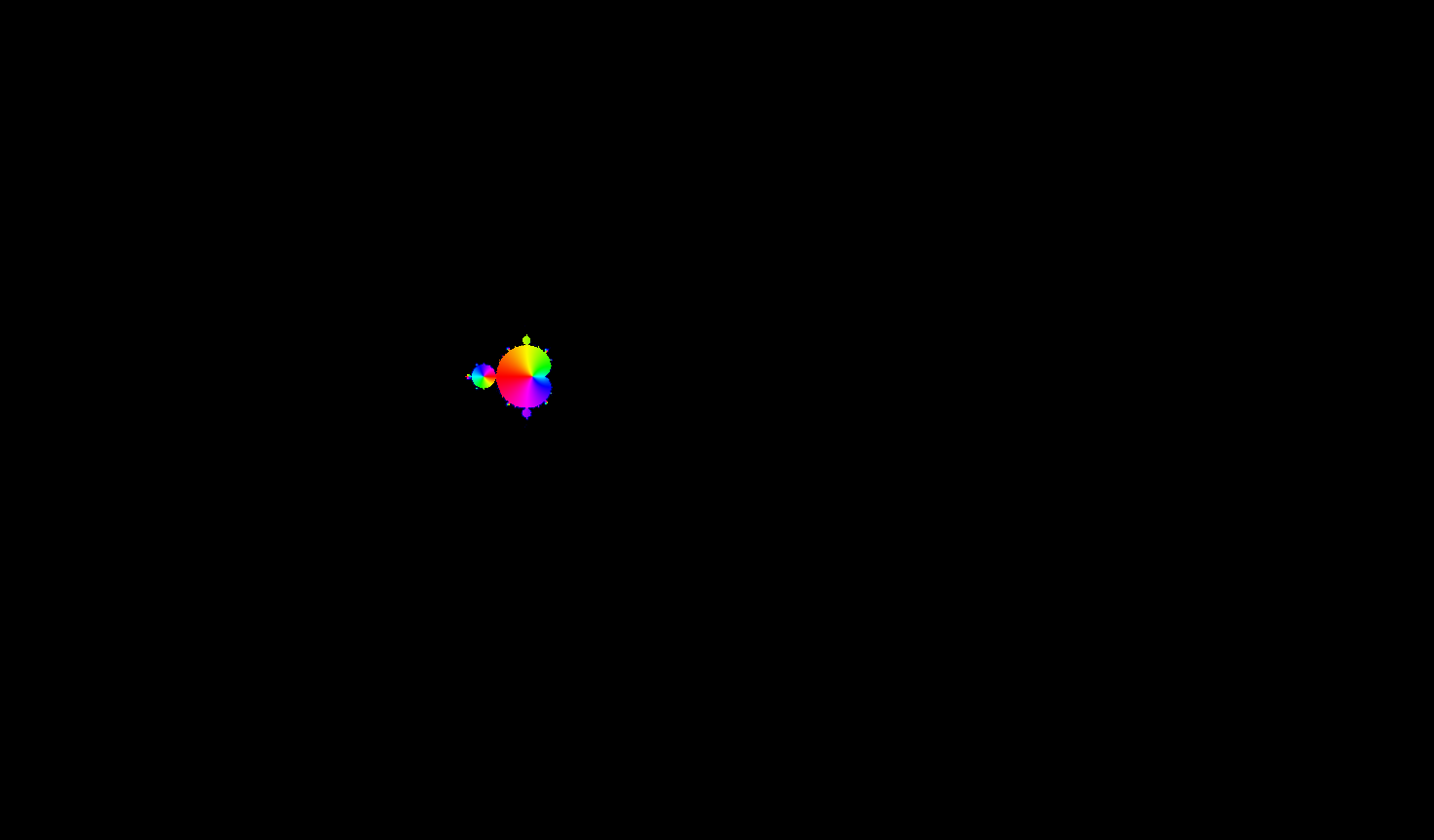 Closely zoomed in you can see the shapes of the two fractals are not entirely the same (unless that's a numerical error). Still, the similarity is striking.

On further inspection the Mandelbrot set (or something like it) appears in a lot more places in this fractal than I initially thought. Just zooming around I can see lots of them.

They appear on all the spindles coming off the colorful area around $z=0$ (the center of the original image). 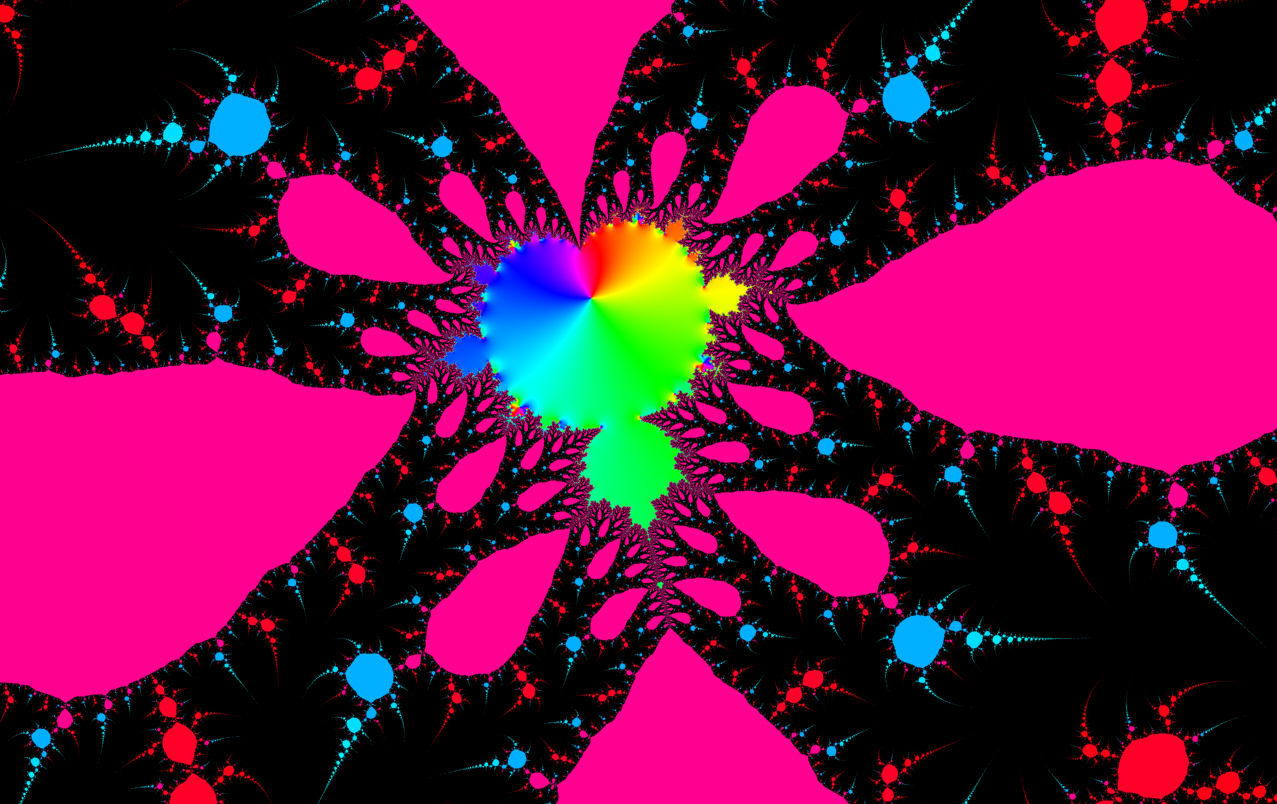 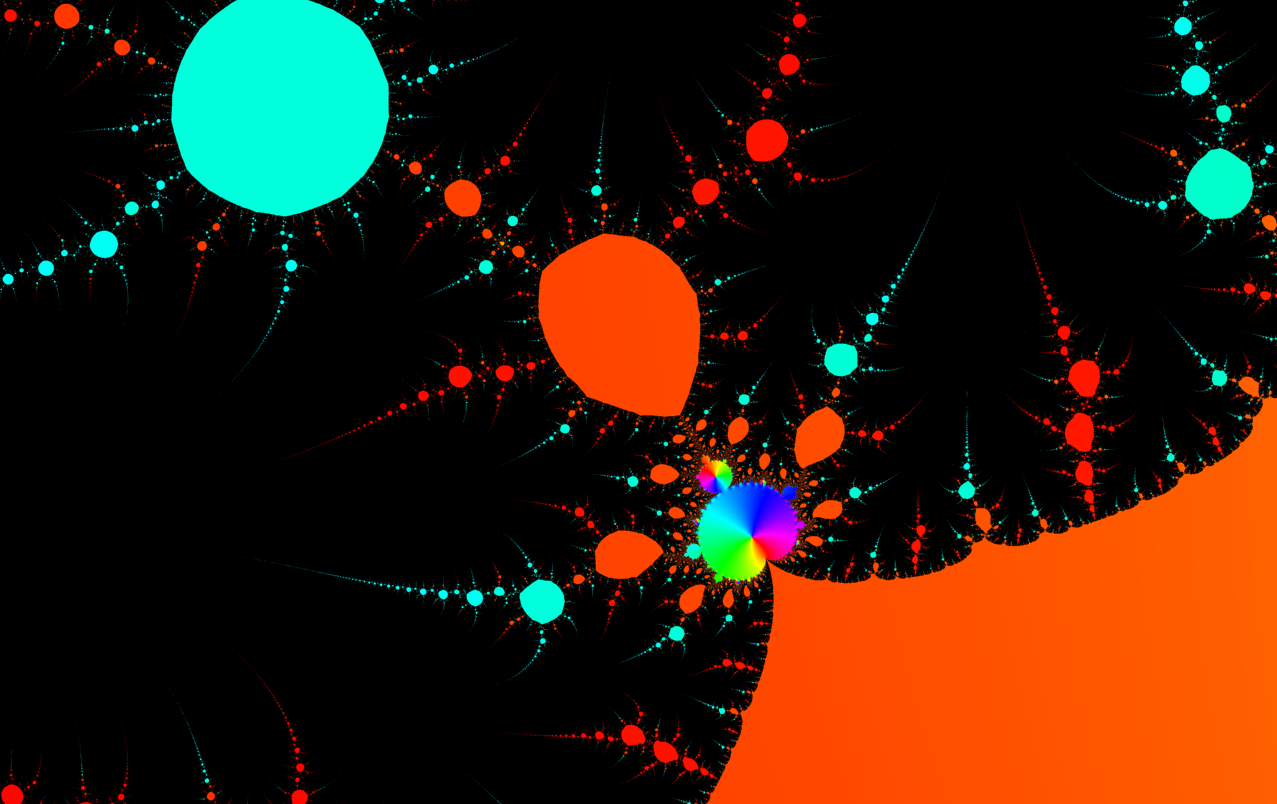 To the upper left of the big orange blob above the set in the previous image: 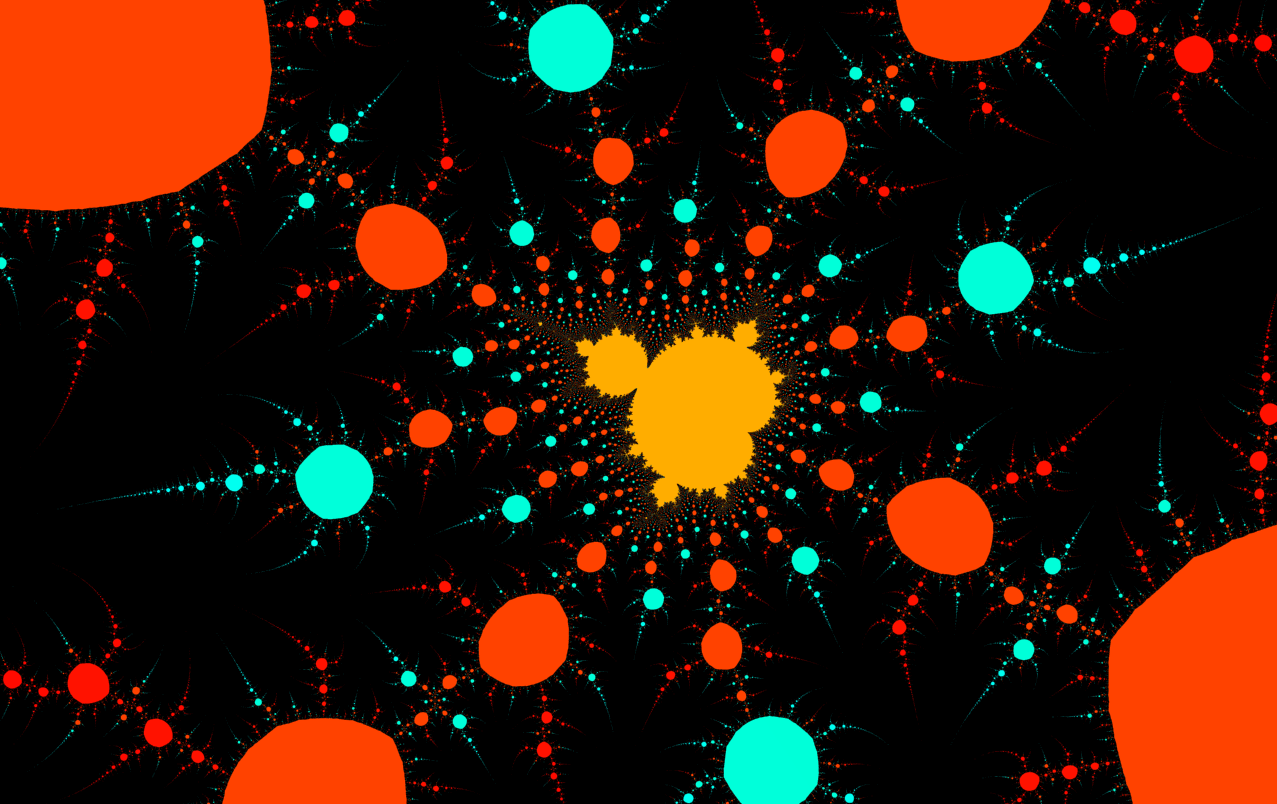 And you might have seen this in the earlier images, but the sets on the real axis aren't just at $m\pi$. The big one on the left is the one at $-\pi$. The center one is at about $2.12$, but note that there are a lot of smaller ones as you move to the right. 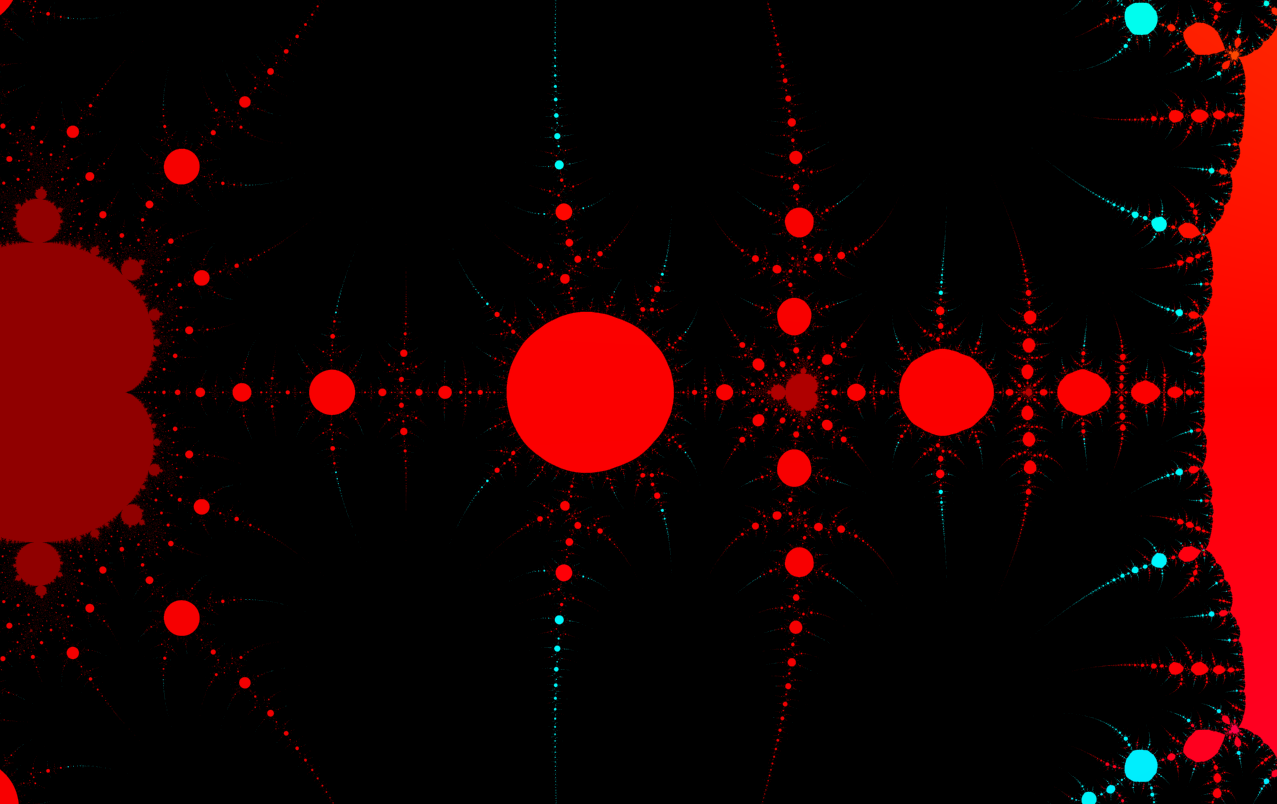 Really it seems like the Mandelbrot-like sets appear for

Where $m,s,t$ are nonzero integers.

There are two research papers worth looking at to get a general idea of what's going on:

Both of these papers make it clear that close copies of the Mandelbrot set often appear in the bifurcation locus for a parametrized family of holomorphic functions. While the focus is on rational families of functions, many of the results extend to transcendental families when properly restricted. So, first, let's try to make it clear how it is that a parametrized family arises in your context. You're trying to invert the tangent function. That is, given a complex number $c$, you want to solve $$\tan(z)=c$$ and you want to do so using Newton's method. Put another way, you want the roots of $f(z)=\tan(z)-c$. Thus, the corresponding Newton's method iteration function is $$N_c(z)= z-f(z)/f'(z) = z-\sin (z) \cos (z) + c \cos ^2(z).$$ This is exactly what we mean by a parametrized family; each $N_c$ is a function of $z$ that also depends upon the parameter $c$.

Next, what exactly do we mean by the bifurcation locus $B(F_c)$ of a parametrized family $F_c$? This is defined in the first paper above as the set of all complex parameters $c$ such that the number of attracting cycles of $F_c$ is not locally constant. For the now classic family $F_c(z)=z^2+c$, this results in the boundary of the Mandelbrot set. For points on the boundary of the Mandelbrot set, there are $c$ values nearby but in the exterior such that $F_c$ has only the point at $\infty$ as an attracting cycle. But there are also points nearby in the interior which have a finite attracting cycle. There are two other characterizations of the bifurcation locus given in the paper but I think that this is the simplest.

Now, how do we plot a bifurcation locus for a more general family? A standard technique is to compute the orbit of a critical point under iteration of $F_c$ for each $c$ chosen from a grid of values and then shade the point $c$ according to the type of periodicity found. Often, this involves some escape criteria but, as we move from $z^2+c$ to more general types of functions, a bit of analysis is sometimes necessary.

Unfortunately, your family isn't quite "polynomial-like". I'm not going to worry about the precise definition here as it's easy to see what the problem is by examining some iterates. In fact, to motivate the next step, let's examine the orbit of the point $z_0=0$ under iteration of $N_{\pi}$. As the $c$ and $z_0$ are both real, we can do so with a cobweb plot: 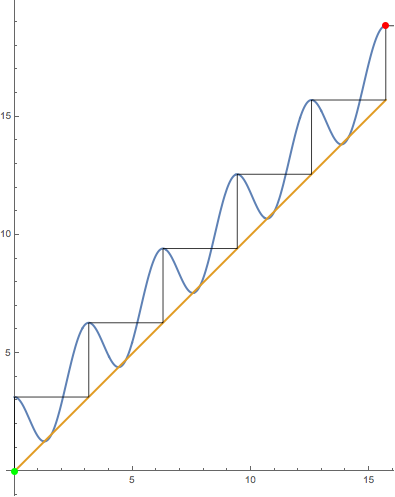 Taking all this into account, I came up with the following image for the bifurcation locus of $NM_c$ on the strip $0\leq \text{Re}(z) <2\pi$: 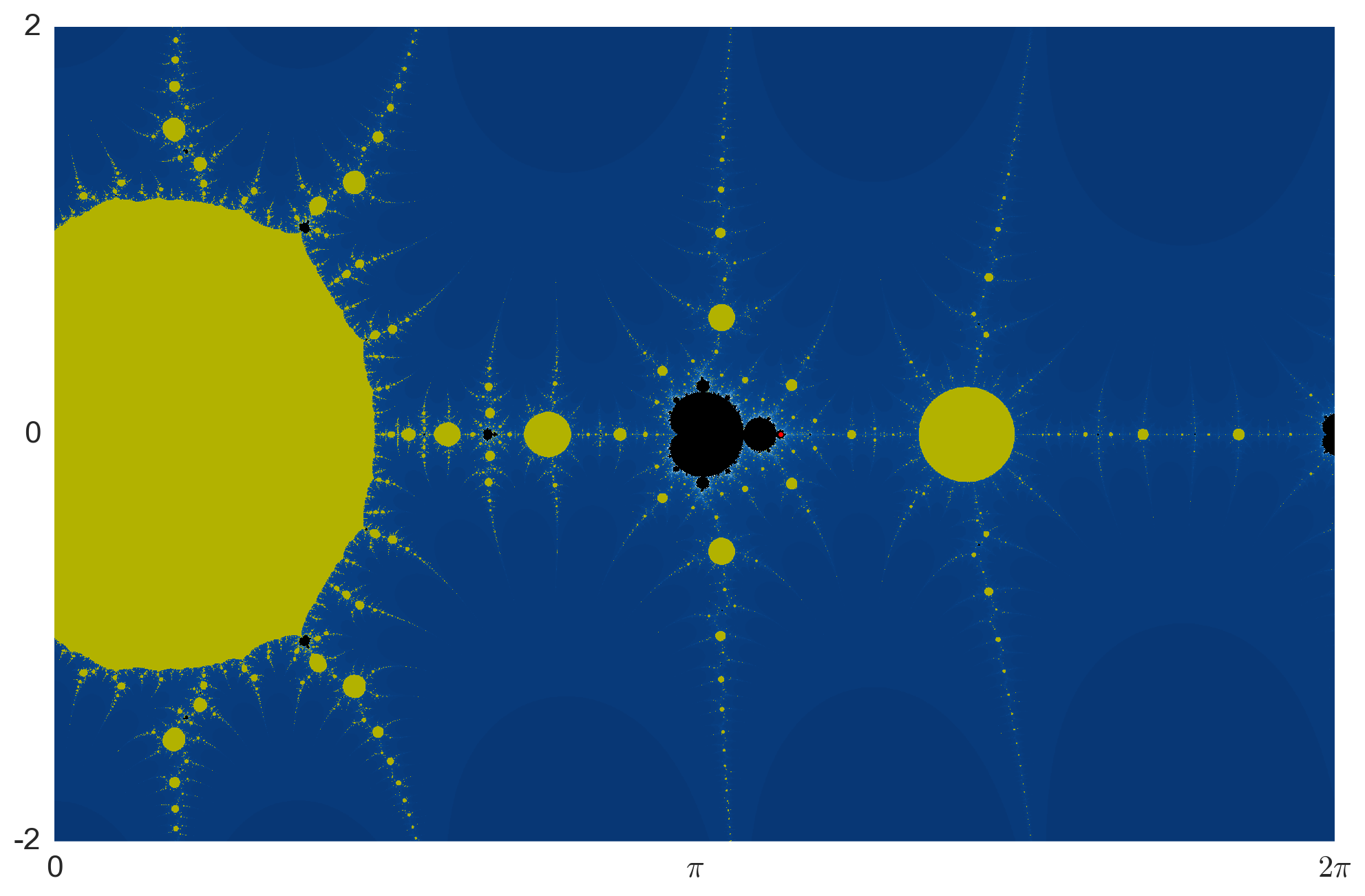 The black region is exactly where we see Mandelbrot like sets and we can use it to find fun Julia sets. The red point shown in the figure lies at $c\approx 3.5613938602255226$. The critical orbit of the corresponding function $NM_c$ is super-attracting with period 4 and it Julia set looks like so:

The abstract of the paper The Mandelbrot set is universal by McMullen is:

We show small Mandelbrot sets are dense in the bifurcation locus for any holomorphic family of rational maps.

This is an indication of what may be happening, even if your map is not a rational map.

Since the first graph is periodic with respect to the dynamical line, we see that the recursion relation for the first equation will always approximate the dynamics of this second recursion relation. Essentially we have a parabola shape that repeats periodically and traps dynamics to finite regions. In fact, for any $-c_1=c_2=\pi \cdot n$ will have this approximation. This can be simply proved by Taylor expansion about $z=\pi \cdot n$. For the case of $c_1=c_2=0$, it just so happens that the parabola approximation becomes a flat line.

You also asked about the recurrence relation given by,

Thus, in relationship to the standard Mandelbrot set, this Mandelbrot set is the same up to a scaled $c$ constant. Thus, for $m=-1$, the space for the Mandelbrot set will translate $\pi$ to the left, and will be scaled down by $\pi$. 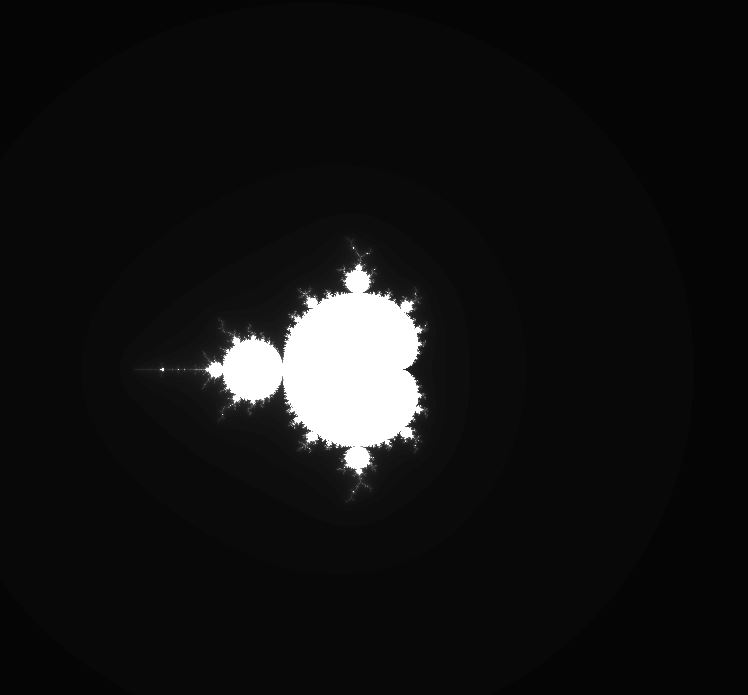 On a square centered on the origin with side length 2. Looks like the Mandelbrot Set, we're in business. Where I'm assuming it's more intuitively clear why this set is similar in appearance to the Mandelbrot Set. If you have any other questions feel free to ask!

Not the answer you're looking for? Browse other questions tagged complex-numbers numerical-methods fractals complex-dynamics or ask your own question.

4
How should I assign RGB colors to points in the Mandelbrot Set?
8
How to compute a negative "Multibrot" set?
6
What are "3D Burning Ship fractals"?
2
Mandelbrot set: periodicity of secondary and subsequent bulbs as multiples of their parent bulbs
12
Grid spacing, iterations used in the 1978 first published rendering of the Mandelbrot set?
1
Mandelbrot set perturbation theory: When do I use it?
2
Algorithm for rendering non-filled Julia sets?