How can I find extrinsic camera matrix?

I would like to do it in a form like OpenGL allows (https://www.opengl.org/sdk/docs/man2/xhtml/gluLookAt.xml), so that I should be able to specify camera center, the point that camera should be "looking at" (this point will be in the center of the image). Unfortunately, the algorithm at https://www.opengl.org/sdk/docs/man2/xhtml/gluLookAt.xml misses formatting, so I'd like a clarification on how to do this, especially in relation to my coordinate system: 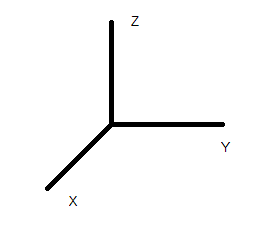 Finally, I will have to rotate camera as well from "landscape" to "portrait" orientation (not exactly by 90 degrees, but by some degree around 89-91 deg, to simulate human's inaccuracy), so the Z axis in the world will lie along with X axis of the camera image plane. How this rotation can be achieved?

I can answer this:

I'm assuming the traditional camera image coordinates (before projection) having $z$ drilling "into" the image, $x$ pointing from left to right, and $y$ pointing downward.

You can find three vectors that point along the new axes in world coordinates, normalize them, then put them in the rows of a $3\times 3$ matrix $R$: this converts world coordinates to rotated camera orientation.

Let's actually carry this out for your example. Let's work on a triad of orthogonal vectors:

Normalizing these and using them as the rows of a matrix you get:

One caveat: I'm not 100% sure the step with $z\times z'$ is always in this order. I picked it this way on this occasion because it gave the right orientation for $x'$ and $y'$ in the end. Hopefully that is all consistent, but maybe there is some sign ambiguity after all.

The second question is how to construct the "UP" vector.

I don't understand what you are asking. If you mean the camera coordinates for the direction of the world $z$-axis, then that would just be $R(0,0,1)^\top +t'$.

Finally, I will have to rotate camera as well from "landscape" to "portrait" orientation .

I'm interpreting this to mean that you'd want to rotate the image plane so that the $y$-axis is horizontal, which could be done with a $\pi/4$ rotation in either way around the camera $z$-axis.

This transformation should be entirely obvious:

Not the answer you're looking for? Browse other questions tagged coordinate-systems rotations projective-geometry computer-vision or ask your own question.

22
How to find camera position and rotation from a 4x4 matrix?
3
Relative camera matrix (pose) from global camera matrixes
3
Bundle Adjustment in the Large and Rodrigues' Rotation Formula
1
Get the camera transformation matrix (Camera pose, not view matrix)
0
How to tumble a camera about a point
0
How to tranform a perspective projection fron World coordinates to camera coordinates
1
Finding the linear mapping between homogeneous coordinates of affine camera